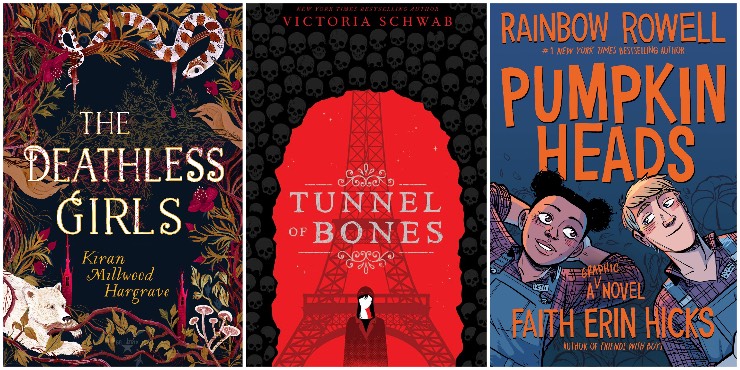 A new mystery for brilliant but lazy detective Garvie Smith.

"A girl called Amy has gone missing, and her parents are going spare. The police have no leads and no clue. But Garvie thinks he has the answer - and it's not what any of the grown-ups expect."

The M Word, by Brian Conaghan

From the author of The Bombs That Brought Us Together and The Weight of a Thousand Feathers.

"She tells her about Mum losing her job – how Mum's taken to crying in secret. She even tells her about her foolproof plan to cheer Mum up: find her a fella with cash to splash.

"Moya's with her every step of the way. I'll help, she smiles. Though you're surfing a rainbow if you think someone like that exists round here.

"But at the back of her mind Maggie knows that Mum's crying is more than sadness. That there are no easy fixes. And that she shouldn't be speaking to Moya any more. Because Moya died months ago."

First graphic novel from the author of Carry On: the rise and fall of Simon Snow.

"But this Halloween is different – Josiah and Deja are finally seniors, and this is their last season at the pumpkin patch. Their last shift together. Their last goodbye.

"Josiah’s ready to spend the whole night feeling melancholy about it. Deja isn’t ready to let him. She’s got a plan: what if instead of moping, they went out with a bang? They could see all the sights! Taste all the snacks! And Josiah could finally talk to that cute girl he’s been mooning over for three years...

"What if their last shift was an adventure?"

The Wind in the Wall, by Sally Gardner & Rovina Cai

"Set in the hot houses of a stately home in eighteenth century England, a gardener falls from grace when the Duke sets him the impossible task of growing prize pineapples fit to show off in high society. The gardener's star falls further when he is replaced by Mr Amicus, a pineapple 'specialist', whom he believes to be a charlatan and a trickster - but nevertheless miraculously produces fruit to delight the Duke.

"Determined to uncover Mr Amicus's tricks, the gardener sneaks into the pineapple house to uncover the mysterious shrouded birdcage Mr Amicus carries with him. And what he finds changes his life forever."

"Ash has lived in eight states in as many years. Mom has gone walkabout, but stepdad Jack is like a father, and stepbrother Bly the best anyone could wish for. When Bly goes missing too, Ash sets off to search for him and finds something much bigger: the sickness of the world.

"Arriving in Snowflake, Arizona, Ash discovers Bly living with a community 6000 feet high in the wide red desert. They call themselves the Canaries and all suffer from some kind of environmental illness. They are ostracised by modern society, as it continues to ignore climate change, global warming and so much more of our self-inflicted poisoning of the planet. When Ash takes ill, the doctor's response is, 'it's all in your mind'.

"In a story spanning seven years with triumphs and tragedies, Ash learns how to live as the world is pushed to a point of no return."

"Jo Kwan is a teenager growing up in 1980s Coventry with her annoying little sister, too-cool older brother, a series of very unlucky pets and utterly bonkers parents. But unlike the other kids at her new school or her posh cousins, Jo lives above her parents' Chinese takeaway. And things can be tough - whether it's unruly customers or the snotty popular girls who bully Jo for being different. Even when she does find a BFF who actually likes Jo for herself, she still has to contend with her erratic dad's behaviour. All Jo dreams of is breaking free and forging a career as an artist.

"Told in diary entries and doodles, Jo's brilliantly funny observations about life, family and char siu make for a searingly honest portrayal of life on the other side of the takeaway counter."

Tunnel of Bones, by Victoria Schwab

Sequel to City of Ghosts.

"Trouble is haunting Cassidy Blake, even more than usual. She (plus her ghost best friend, Jacob, of course) are in Paris, where Cass's parents are filming their TV show about the world's most haunted cities. Sure, it's fun eating croissants and seeing the Eiffel Tower, but there's true ghostly danger lurking beneath Paris, in the creepy underground Catacombs.

"When Cass accidentally awakens a frighteningly strong spirit, she must rely on her still-growing skills as a ghosthunter - and turn to friends both old and new to help her unravel a mystery. But time is running out, and the spirit is only growing stronger. And if Cass fails, the force she's unleashed could haunt the city forever."

"Life in Bearmouth will never change - at least, that's what people say. They work hard to bring wealth to the Master, toiling in dark mines and brutal conditions for six long days each week.

"When young friends Newt and Devlin start to question the system, they set in motion a chain of events that could destroy their entire world. But freedom is worth fighting for."

YA debut from the author of The Girl of Ink & Stars and The Way Past Winter.

"Gothic, intoxicating, feminist, and romantic - this is the breathtakingly imagined untold story of the brides of Dracula.

"They say the thirst of blood is like a madness - they must sate it. Even with their own kin. On the eve of her divining, the day she'll discover her fate, seventeen-year-old Lil and her twin sister Kizzy are captured and enslaved by the cruel Boyar Valcar, taken far away from their beloved traveller community. Forced to work in the harsh and unwelcoming castle kitchens, Lil is comforted when she meets Mira, a fellow slave who she feels drawn to in a way she doesn't understand. But she also learns about the Dragon, a mysterious and terrifying figure of myth and legend who takes girls as gifts. They may not have had their divining day, but the girls will still discover their fate."

"Meet the Washingtons - the most scandalous royal family ever! HRH Princess Samantha has always been a royal rebel. She's the spare not the heir, so no one minds too much who she dates or how hard she parties. It helps that her sister, Princess Beatrice, is literally perfect. She's demure, sweet and beautiful, and she knows that the crown always comes first - no matter what her heart might really want.

"But they're not the only ones with their eye on the throne. Daphne Deighton might be 'newly noble' but she won Prince Jefferson's heart once, and she'll do anything to get back into the court's favour - and his bed. If only she knew that her competition was a common nobody - plain little Nina Gonzalez, the daughter of the king's secretary.

"Together these four young women must navigate the drama, gossip, scheming and sizzling romance of the most glorious court in the world."

This has been pitched as Gossip Girl meets The Crown.