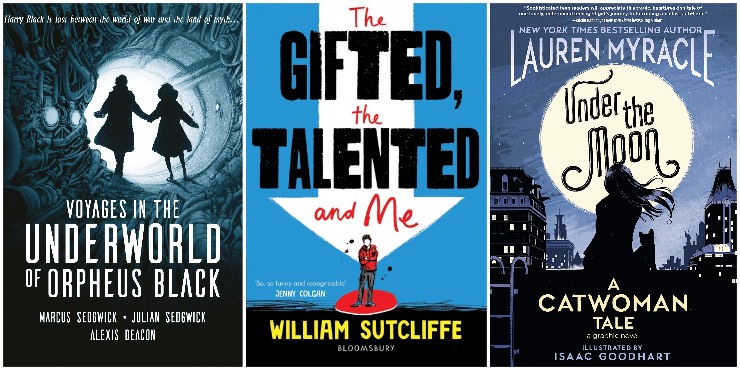 New verse novel from the author of Moonrise and One

"Allison is in danger at home. Her stepmother has run away and her father is getting worse. So she runs away too and with no where to live finds herself hiding out, miles from home, in an elderly woman's shed. But this woman, Marla, has dementia and doesn't recognise her as Allison, believing she is an old friend from her past called Toffee. So this is who Allison becomes, morphing into a person Marla usually knows and trusts but sometimes fears and fights.

"As their bond grows, Allison begins to ask herself - where is home? What is a family? And most importantly, who am I, really?"

"On a desperate journey to recover her sister's lost soul, Valkyrie Cain goes up against the High Sanctuary itself, and there's nothing Skulduggery Pleasant can do to stop her.

"With Abyssinia's grand plan about to kick off in a night of magic, terror, and bloodshed, it falls to Omen Darkly to save the lives of thousands of innocent people.

"And as the madness unfolds around him, as hidden enemies step into the light, and as Valkyrie is sucked into a desperate, lawless quest of her own, he has no choice but to become the hero he never really wanted to be — or die in the attempt."

Voyages in the Underworld of Orpheus Black, by Marcus & Julian Sedgwick & Alexis Deacon

In this crossover graphic novel:

"Harry Black wakes in hospital to learn that his brother Ellis has almost certainly been killed by a V2 rocket falling during a German air raid on London. In a state of wounded delirium, Harry's mind begins to blur the distinctions between the reality of the war-torn city, the fiction of his unpublished sci-fi novel and the myth of Orpheus and Eurydice. Driven by visions of Ellis still alive and a sense of poetic inevitability, Harry discharges himself from hospital and begins a search for his brother that will lead him deep into the city's Underworld."

The Gifted, the Talented and Me, by William Sutcliffe

From the author of We See Everything.

"Fifteen-year-old Sam isn't special. He's not a famous vlogger, he's never gone viral, and he doesn't want to be the Next Big Thing. What he likes most is chatting to his friends and having a bit of a kick about. None of which was a problem until Dad got rich and Mum made the whole family move to London.

"Now Sam is being made to go to the North London Academy for the Gifted and Talented, where every student is too busy planning Hollywood domination or starting alt-metal psychedelica crossover bands or making clothes out of bathmats to give someone as normal as him the time of day. Can Sam navigate his way through the weirdness and find a way to be himself?"

"Nothing's been the same for Beth Teller since she died. Her dad, a detective, is the only one who can see and hear her, and he's drowning in grief. Only a suspected murder, and a mystery to solve, might save them both. And they have a potential witness: Isobel Catching.

"Aboriginal by birth, like Beth, she seems lost and isolated in the world. But as the two get closer, Isobel's strange tale of glass-eyed monsters and stolen colours will intertwine with Beth's investigation - and reveal something dark and terrible at the heart of this Australian town."

"Stepsister takes up where Cinderella's tale ends. We meet Isabelle, the younger of Cinderella's two stepsisters. Ella is considered beautiful; stepsister Isabelle is not. Isabelle is fearless, brave, and strong-willed. She fences better than any boy, and takes her stallion over jumps that grown men fear to attempt. It doesn't matter, though; these qualities are not valued in a girl. Others have determined what is beautiful, and Isabelle does not fit their definition. Isabelle must face down the demons that drove her cruel treatment of Ella, challenge her own fate and maybe even redefine the very notion of beauty...

"Cinderella is about a girl who was bullied; Stepsister is about the bully. We all root for the victims, we want to see them triumph. But what about the bullies? Is there hope for them? Can a mean girl change? Can she find her own happily ever after?"

In the follow-up to Siege:

"A British agent investigating the rogue state's nuclear capabilities has gone missing. The secretive nature of life in Pyongyang means that unfamiliar adults would be attract suspicion and fall under immediate surveillance. So the cadets form part of a young pioneers tour to the North Korean capital. Once there, they must use their skills and training to find out more about the missing agent.

"In the course of their investigations, they forget the one rule every undercover operator must obey: trust nobody. When a local teenager they befriend betrays his suspicions to the North Korean secret police, the young cadets must use all their skill to escape the authorities and the country. But can they locate the British agent at the same time?"

"Meet Morgan and Eric: born on the same day, at the same time and bonded for life. In this moving dual narrative, we meet them every birthday from the age of thirteen, as Eric figures out who he is, as Morgan decides to live as her true self, and as they realise they are inextricably part of each other."

This has been described bt published Usborne as 'LGBTQ+ One Day'.

"Jana Novak's history sounds like a classic model cliché: tall and gangly, she's uncomfortable with her androgynous looks until she's unexpectedly scouted and catapulted to superstardom. But the fashion industry is as grimy as it is glamorous. And there are unexpected predators at every turn.

"Jana is an ordinary girl from a south London estate, lifted to unimaginable heights. But the further you rise, the more devastating your fall."

Dawson’s last novel, Clean, was shortlisted for the YA Book Prize 2019.

The Girl Who Came Out of the Woods, by Emily Barr

"I've been trapped here for days. What if I die here? I decided to write down my story so that one day, when I'm discovered, they will know who I was and why I was here.

"Arty has always lived in the Clearing, a small settlement in the forests of South India. But their happy life, hidden from the rest of the world, is shattered by a terrible accident. For the first time in her 16 years, Arty must leave the only place she's ever known, into the outside world she's been taught to fear. Her only goal is to get help from a woman called Tania, and the Uncle she knows is out there, somewhere.

"As she embarks on the terrifying journey, pursued by an enemy she can't fathom, Arty soon realises that not everyone is to be trusted. She's looking for answers, but what she'll learn is a shocking truth about her past. Everything is changing too fast for this girl who came out of the woods, and is she running into a trap?"

You Got This: a mad girl's guide to being you, by Bryony Gordon

Guide to life from the journalist and mental health campaigner.

"It was only recently I realised not wanting to be me when I grew up was at the heart of every dumb decision I ever made. Yet when I really sat down and thought about it, being me was the thing that people most actually liked about me and it was much easier than trying to be someone else. And so, now I find myself writing this book containing all the life lessons I wish someone had told me at 14, which I am only really learning now. A book for the teenage girl in me. And for every teenage girl out there.

"Because the most powerful thing you can be when you grow up is yourself. Sharing 10 crucial life lessons, from self-respect and esteem to body confidence and mental health, this is the ultimate guide to growing up happy."

Under the Moon: a Catwoman tale, by Lauren Myracle & Isaac Goodhart

"When fourteen-year-old Selina Kyle, aka the future Catwoman, becomes homeless, she must confront questions of who she is and who she will become. She rejects human cruelty, but sometimes it seems as though brute force is the only way to 'win.' And if Selina is to survive on the streets, she must be tough. Can she find her humanity and reconcile toughness with her desire for community - and love?"

"Lucy thinks she's better than the other girls. Maybe if she's pointing fingers at everyone else, no one will see the secret she's hiding.

"Ulana comes from a conservative Muslim family where reputation is everything. One rumour - true or false - can destroy futures.

"Trina likes to party. She's kissed a lot of boys. She's even shown her red bra to one. But she didn't consent to that night at Lucy's party. So why doesn't anyone believe her?

"Sophia loved her boyfriend. She did anything for him, even send him photos of herself. So why is she the one being pointed at in the hallways, laughed at, spat at when it was him who betrayed her trust?"

"After escaping from imprisonment under the brutal Kaiser, Theodosia is on the run, plotting to take revenge and reclaim her rightful place as queen of the enslaved Astreans. Thousands of miles away from her people and her throne, Theo and her friends must work to gather an army. And the only way is to auction herself as a bride - to the kingdom who will pay the most.

"Freedom always comes at a price and with the Kaiser closing in, she must rely on her wits to identify who she can really trust."

A Good Girl's Guide to Murder, by Holly Jackson

"Five years ago, schoolgirl Andie Bell was murdered by Sal Singh. The police know he did it. Everyone in town knows he did it. But having grown up in the same small town that was consumed by the crime, Pippa Fitz-Amobi isn't so sure.

"When she chooses the case as the topic for her final project, she starts to uncover secrets that someone in town desperately wants to stay hidden. And if the real killer is still out there, how far will they go to keep Pip from the truth?"