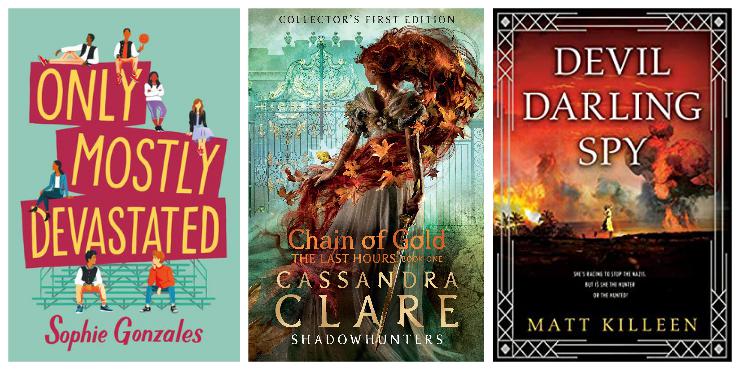 The crossover, by Kwame Alexander and Dawud Anyabwile

"With a bolt of lightning on my kicks. The court is SIZZLING. My sweat is DRIZZLING. Stop all that quivering. Cuz tonight I'm delivering' raps twelve-year-old Josh Bell. Thanks to their dad, he and his twin brother, Jordan, are kings on the court. But Josh has more than basketball in his blood - he's got mad beats, too, which help him find his rhythm when it's all on the line.

"See the Bell family in a whole new light through Dawud Anyabwile's dynamic illustrations as the brothers' winning season unfolds, and the world as they know it begins to change."

"The deadliest weapon is a girl with nothing to lose...

Sarah is used to spying in the champagne-fuelled parties of Nazi Berlin. But her new mission is infinitely more deadly – tracking a lethal disease across bullet-torn Africa, to uncover the monster who would use it to create fifty million corpses. Her enemies think she is a terrified little girl. But she is a warrior set to burn them all."

"15-year-old Owen Marlow is experiencing a great, disorienting loss after his father suddenly passed away and his mother moved them to a new town. None of his old friends knew how to confront his grief, so he's given up on trying to make new ones. There is one guy at school who might prove to be different if he gives him a chance but lately, Owen has been overwhelmed by his sadness. He's started to have strange, powerful hallucinations of skeletal birds circling above him.

"Owen tells himself that these visions are just his brain's way of trying to cope - until one night, the birds descend and take him to an otherworldly forest. There, he is asked to go on a dangerous journey that promises to bring him the understanding he so desperately seeks - if he can survive it."

"When their father fails to come home one day, Lola and Amit face a terrifying new reality. With no money and no idea how to look after themselves, they are made homeless and must find a way to survive on the streets."

First book in a new series from the author of Evermore

"Summers at Havenfall's famous Inn are Maddie Marrow's only solace from her dysfunctional existence. But the Inn is much more than a hotel, and life in Havenfall isn't without its secrets. Beneath the beautiful, sprawling manor in Colorado lie hidden gateways to other worlds, some long-sealed by ancient magic.

"When a body is found on the grounds, the volatile peace brokered between these worlds is irrevocably compromised. What's worse is that Maddie's friend Brekken stands accused of the murder. With everything she loves at stake, Maddie must confront shocking truths about the dangers lurking beneath Havenfall - and discover who she really is."

The darkest unicorn, by Alice Hemming

"In the usually peaceful city of Arvale, people are going missing. Men, women - even children. The palace makes an urgent decree: all royal subjects must abide by a strict curfew for their own safety. But for Thandie and her friends, a curfew means more adventure. They dare each other to sneak about the city at night - although Thandie is the only one brave enough to actually do it.

"One night, as an eerie fog sets in, Thandie is startled by a strange boy - a boy she's never seen before. He looks about her age but there's something unsettling about him, leaving Thandie to wonder if he's someone she should trust. Little does she know that this meeting will force her life wildly off-track, pushing her towards an unexpected danger and a fearsome unicorn who is at the very heart of the terrible disappearances she's heard so much about."

"Welcome to the dizzying heights of New York's Upper East Side: where privilege, partying and scandal rules. And Anna K. knows the rules by heart. Beautiful, rich and popular, she takes care to maintain her status as the perfect girlfriend, daughter and student. Then a chance encounter at Grand Central station with notorious playboy Alexi 'Count' Vronsky changes everything. Anna knows she needs to avoid Alexi, but sometimes fate has other plans.

"Soon Anna finds it impossible to resist him, and finds herself willing to risk everything she has to be with him - no matter the consequences. After all, the course of true love never did run smooth."

Only mostly devastated, by Sophie Gonzales

An LGBT re-imagining of Grease.

"When Ollie meets Will over the summer break, he thinks he's found his Happily Ever After. But once summer's ended, Will stops texting him back, and Ollie finds himself short of his fairy-tale ending. A family emergency sees Ollie uprooted and enrolled at a new school across the country - Will's school - and Ollie finds that the sweet, affectionate and comfortably queer guy he knew from summer isn't the same one attending Collinswood High. This Will is a class clown, a basketball jock and, well, a bit of a jerk. Ollie isn't going to pine after a guy who isn't ready for a relationship.

"But as school life repeatedly throws them together, from music class to the lunch table, Ollie finds his resolve weakening. With the noisy drama of their friends as the backdrop - from ambitious Juliette and frosty Lara, to big-hearted Darnell and king-jock Matt - Ollie has a decision to make."

"When Amber runs, it's the only time she feels completely free - far away from her claustrophobic home life. Her father wants her to be a dutiful daughter, waiting for an arranged marriage like her sister Ruby. Running is a quiet rebellion. But Amber wants so much more - and she's ready to fight for it. It's time for a revolution."

Chain of gold, by Cassandra Clare

" James Herondale longs for a great love, and thinks he has found it in the beautiful, mysterious Grace Blackthorn. Cordelia Carstairs is desperate to become a hero, save her family from ruin, and keep her secret love for James hidden. When disaster strikes the Shadowhunters, James, Cordelia and their friends are plunged into a wild adventure."

And the stars were burning brightly, by Danielle Jawando

"When 15-year-old Nathan discovers that his older brother Al has taken his own life, his whole world is torn apart. Al was special. Al was talented. Al was full of passion and light - so why did he do it?

"Convinced that his brother was in trouble, Nathan decides to retrace Al's footsteps. As he does, he meets Megan, Al's former classmate, who is as determined as Nathan to keep Al's memory alive. Together they start seeking answers, but will either of them be able to handle the truth about Al's death when they eventually discover what happened?"

The love hypothesis, by Laura Steven

LGBT rom-com from the winner of the Comedy Women in Print prize.

"Physics genius Caro Kerber-Murphy knows she's smart. With straight As and a college scholarship already in the bag, she's meeting her two dads' colossal expectations and then some. But there's one test she's never quite been able to ace: love. And when, in a particularly desperate moment, Caro discovers a (definitely questionable) scientific breakthrough that promises to make you irresistible to everyone around you, she wonders if this could be the key. What happens next will change everything Caro thought she knew about chemistry - in the lab and in love."

The map from here to there, by Emery Lord

From the author of The start of me and you and featuring some of the same characters.

"It's senior year, and Paige Hancock is finally living her best life. She has a fun summer job, great friends, and a super charming boyfriend who totally gets her. But senior year also means big decisions. Feeling the weight of 'the rest of her life' Paige starts to panic. Everything is exactly how she always wanted it to be - how can she leave it all behind next year? In her head, she knows there is so much more to life after high school. But in her heart, is it so terrible to want everything to stay the same forever?

"Emery Lord's signature storytelling shines with lovable characters and heartfelt exploration of life's most important questions. There will be break-ups, make-ups, a road trip, and even a wedding. Through it all, can Paige figure out what happens in the after part of happily ever after?"