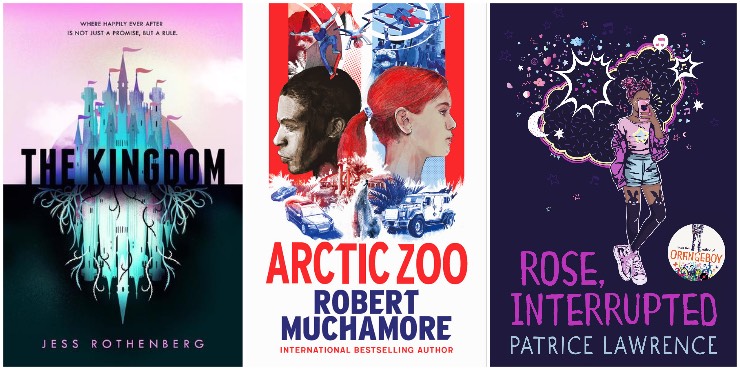 Jemima Small Versus the Universe, by Tasmin Winter

Body positivity from the author of Being Miss Nobody.

"Jemima Small finds it hard to measure up. Especially because she's the very opposite of her name. And being forced to join a healthy eating group at school means no one will let her forget that. But if there's one big thing she has going for her it's her attitude - and she's determined to prove that Jemima Small is a Big Deal."

Beautiful new editions of the bestselling Danish fantasy quartet about a girl who can use her eyes to force people to acknowledge all their weaknesses and guilt.

New title from the author of White Rabbit, Red Wolf.

"Cat is in love. Always the sensible one, she can't believe that she's actually dating, not to mention dating a star. But the fandom can't know. They would eat her alive. And first at the buffet would definitely be her best friend, Evie.

"Amy uses Heartstream, a social media app that allows others to feel your emotions. She broadcast every moment of her mother's degenerative illness, and her grief following her death. But on the day of Amy's mother's funeral, Amy finds a strange woman in her kitchen. She's rigged herself with explosives - and she's been waiting for Amy. Who is she? A crazed fan? What does she want? Amy and Cat are about to discover how far obsession can go."

What Magic Is This?, by Holly Bourne

This new title from the author of It Only Happens in the Movies is specially optimised for readers with dyslexia and visual stress.

"Sophia, Mia and Alexis are clinging on to a spark of hope that maybe - just maybe - they're special. But could they really be witches with the power to cast life-changing spells?"

The Harm Tree, by Rose Edwards

"Nine years ago, two princes waged a bloody civil war for the right to rule Arngard. The younger prince took the throne and outlawed the ancient beliefs, but some wounds don't heal. New religion replaced the barbaric traditions and finally, there's peace.

"Torny and Ebba are friends. Sent away by their families, they work together and watch out for each other. Too young to remember the war that tore apart the kingdom, Torny dreams of the glorious warriors of old, while Ebba misses her family, despite the darkness she left behind. But when a man is murdered on the street and Torny finds herself in possession of a dangerous message, the two friends must tread separate paths. These will lead them through fear, through grief, to the source of their own power and to the gates of death itself.

"As Torny and Ebba are used as tools for the opposing factions of the war, a deep power is ignited in them both."

"'How can I hold myself together, when everything around me is falling apart?'

"Neena's always been a good girl - great grades, parent-approved friends and absolutely no boyfriends. But ever since her brother Akash left her, she's been slowly falling apart - and uncovering a new version of herself who is freer, but altogether more dangerous.

"As her wild behaviour spirals more and more out of control, Neena's grip on her sanity begins to weaken too. And when her parents announce not one but two life-changing bombshells, she finally reaches breaking point. But as Neena is about to discover, when your life falls apart, only love can piece you back together."

The Kingdom, by Jess Rothenberg

"Welcome to the Kingdom, a dazzling fantasy theme park where 'happily ever after' is not just a promise, but a rule...

"The Kingdom is a place where technology helps dreams come to life. Formerly extinct species roam the park, and seven beautiful 'Fantasists' – half-human, half-android princesses – entertain visitors and make wishes come true. But this fairytale ends in murder, and now Ana, one of the seven Fantasists, is in the dock after finding herself experiencing emotions and romantic feelings against all her programming..."

Epic fantasy from the author of the Changeling series.

"Lann knows nothing of his mysterious past, but by his 15th birthday he will come face to face with destiny. For Lann must wield the Dreadblade, an ancient sword forged to defeat terrible monsters.

"Across the mountains a King has been murdered. His daughter, Astrid, is a warrior with no desire to bear the crown. Only she can uncover her father's killer before her brother is framed for the crime.

"Evil is stirring. Lann and Astrid are the kingdom's last defence. Together, they must face the greatest darkness their world has ever known."

"Nick and Charlie are best friends. Nick knows Charlie's gay, and Charlie is sure that Nick isn't. But love works in surprising ways, and Nick is discovering all kinds of things about his friends, his family - and himself.

"Heartstopper is about friendship, loyalty, and mental illness. It encompasses all the small stories of Nick and Charlie's lives that together make up something larger, which speaks to all of us."

New from the award-winning author of Orangeboy and Indigo Donut.

"Eighteen months ago, 17-year-old Rose and 13-year-old Rudder escaped a strict religious sect with their mum. They are still trying to make sense of the world outside - no more rules about clothes and books, films and music, no more technology bans. But also no more friendship with the people they've known all their lives, no community and no certainty. It doesn't help that their mum has to work all hours to pay rent on their cramped, smelly, one-bed flat above a kebab shop in Hackney.

"While Rudder gorges on once-taboo Harry Potters and dances to Simon and Garfunkel and show tunes, Rose swaps the ankle skirts and uncut hair of the Woodford Pilgrims for Japanese-cute fairy dress and her new boyfriend, Kye. Kye, who she wants with all her being. But there's loads of scary stuff about their new life that Rose and Rudder have no idea how to handle."

The retelling of Moby Dick, updated and with a female protagonist, is the launch title for Hachette's new YA collection Bellatrix, which tells the untold and unheard stories of women. De Waal is probably best known for her critically acclaimed adult fiction book My Name is Leon.

"17-year-old Dinah needs to leave her home, the weird commune where she grew up. She needs a whole new identity, starting with how she looks, starting with shaving off her hair, her 'crowning glory'. She has to do it quickly, because she has to go now.

"Dinah was going to go alone and hitch a ride down south. Except, she ends up being persuaded to illegally drive a VW campervan for hundreds of miles, accompanied by a grumpy man with one leg. This wasn't the plan. But while she's driving, Dinah will be forced to confront everything that led her here, everything that will finally show her which direction to turn."

All the Things We Never Said, by Yasmin Rahman

"16-year-old Mehreen Miah's anxiety and depression, or 'Chaos', as she calls it, has taken over her life, to the point where she can't bear it any more. So she joins MementoMori, a website that matches people with partners and allocates them a date and method of death, 'the pact'.

"Mehreen is paired with Cara Saunders and Olivia Castleton, two strangers dealing with their own serious issues. As they secretly meet over the coming days, Mehreen develops a strong bond with Cara and Olivia, the only people who seem to understand what she's going through. But ironically, the thing that brought them together to commit suicide has also created a mutually supportive friendship that makes them realise that, with the right help, life is worth living. It's not long before all three want out of the pact.

"But in a terrifying twist of fate, the website won't let them stop, and an increasingly sinister game begins."

"Georgia gets straight As at school, has been placed first in twenty-six drone races and has a serious addiction to buying Japanese stationery. She plans to follow her older sister Sophie and become a doctor, but her worldview is shattered when tragedy strikes.

"Julius lives in Ondo, a Nigerian state where half the population lives on less than a dollar a day. But he isn't one of them. His uncle has been state governor for more than a decade and his mother is the power behind that throne. He finds refuge in a derelict zoo with best friend Duke, but as the two of them grow close, the world outside becomes more and more hostile.