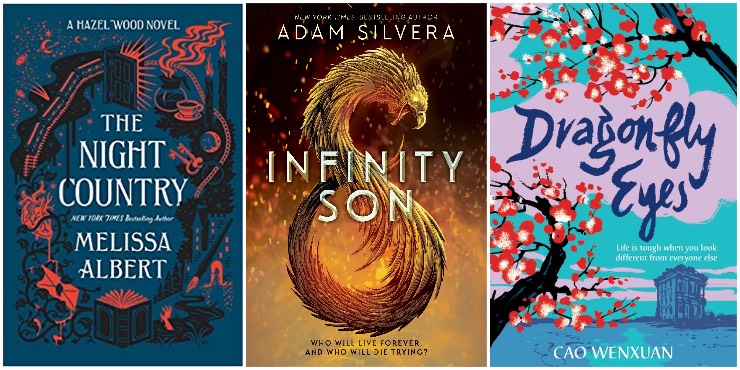 This title is already a huge bestseller and award winner in China.

"Ah-Mei and her French grandmother, Nainai, share a rare bond. Maybe because Ah-Mei is the only girl grandchild, or maybe because the pair look so alike - and because neither look much like the rest of their Chinese family. Politics and war make 1960s Shanghai a hard place to grow up, especially when racism and bigotry are rife, and everyone is suspicious of Nainai's European heritage.

"Ah-Mei and her family suffer much in this time of political upheaval, and when the family silk business falters, they are left with almost nothing. But Ah-Mei and her grandmother are resourceful, and they have one another - and the tenderness they share brings them great strength."

This has been described by one reviewer as Crazy Rich Asians meets a Jane Austen comedy of manners.

"And just like that, Ever Wong's summer takes an unexpected turn. Gone is Chien Tan, the strict educational programme in Taiwan that Ever was expecting. In its place, she finds Loveboat: a summer-long free-for-all where hookups abound, adults turn a blind eye, and the nightlife runs nonstop.

"But not every student is quite what they seem: Ever is working toward becoming a doctor but nurses a secret passion for dance. Rick Woo is the Yale-bound child prodigy bane of Ever's existence whose perfection hides a secret. Boy-crazy, fashion-obsessed Sophie Ha turns out to have more to her than meets the eye. And under sexy Xavier Yeh's shell is buried a shameful truth he'll never admit. When these students' lives collide, it's guaranteed to be a summer Ever will never forget!"

The Conference of the Birds, by Ransom Riggs

New title in the world of Miss Peregrine’s Peculiar Children.

A Heart So Fierce and Broken, by Brigid Kemmerer

Sequel to A Curse So Dark and Lonely.

"Harper has freed Prince Rhen from the curse that almost destroyed his kingdom. But all is not well; rumours are rife that there is a rival heir with a stronger claim to the throne and that 'Princess' Harper of Disi is nothing but a fraud.

"Grey has fled the castle carrying a terrible secret. When he is discovered by soldiers and returned to Ironrose by force, Grey's allegiances begin to shift. And as he grows closer to an enemy princess, he is forced to decide whether he will stand against Rhen for the crown he never wanted."

Fantasy debut from the author of They Both Die at the End.

"Growing up in New York, brothers Emil and Brighton always idolised the Spell Walkers - a vigilante group sworn to rid the world of spectres. While the Spell Walkers and other celestials are born with powers, spectres take them, violently stealing the essence of endangered magical creatures. Brighton wishes he had a power so he could join the fray. Emil just wants the fighting to stop. The cycle of violence has taken a toll, making it harder for anyone with a power to live peacefully and openly.

"In this climate of fear, a gang of spectres has been growing bolder by the day. Then, in a brawl after a protest, Emil manifests a power of his own - one that puts him right at the heart of the conflict and sets him up to be the heroic Spell Walker Brighton always wanted to be. Brotherhood, love, and loyalty will be put to the test, and no one will escape the fight unscathed."

The Night Country, by Melissa Albert

Follow-up to The Hazel Wood.

"Alice has fought hard for a normal life. Having escaped the Hinterland - the strange, pitch-dark fairy tale world she was born into - she has washed up in New York City, determined to build a new future for herself. But when her fellow survivors start being brutally murdered, Alice must face the fact that the Hinterland cannot be so easily escaped, and that, from the shadows of her past, something - or someone - is coming for her."

One Of Us Is Next, by Karen M. McManus

"Welcome back to Bayview High. It is a year after the action of One of Us is Lying, and someone has started playing a game of truth or dare. But this is no ordinary truth or dare. This game is lethal. Choosing the truth may reveal your darkest secrets, accepting the dare could be dangerous, even deadly. The teenagers of Bayview must work together once again to find the culprit, before it's too late."

"Veronica is top of her class - but now she's gazing in disbelief at a positive pregnancy test. In this wild, warm and darkly funny road trip story, Veronica drives a thousand miles to an out-of-state abortion clinic - and along the way rediscovers the best friend she thought she'd lost."

Second in a series set in the Buffy the Vampire Slayer universe.

"Now that Nina has turned the Watcher's Castle into a utopia for hurt and lonely demons, she's still waiting for the utopia part to kick in. With her sister Artemis gone and only a few people remaining at the castle - including her still-distant mother - Nina has her hands full. Plus, though she gained back her Slayer powers from Leo, they're not feeling quite right after being held by the seriously evil succubus Eve, a.k.a. fake Watcher's Council member and Leo's mom.

"And while Nina is dealing with the darkness inside, there's also a new threat on the outside, portended by an odd triangle symbol that seems to be popping up everywhere, in connection with Sean's demon drug ring as well as someone a bit closer to home. Because one near-apocalypse just isn't enough, right?"

Going the Distance, by Beth Reekles

Sequel to The Kissing Booth, published ahead of the forthcoming Netflix series.

"Elle Evans seems to have finally tamed hotter-than-hot bad boy Noah Flynn, but now they're facing a new challenge. Noah's 3000 miles away at Harvard, which means they're officially a long-distance couple - and it's tough. After all, there's only so much texts and calls can satisfy - and when Elle sees a post which suggests Noah's getting friendly with someone else, she's devastated. On top of that, it's hard to ignore new boy Levi. He's gentle, sweet, cute - and definitely interested in Elle. With her heart on the line, what's a girl to do?"