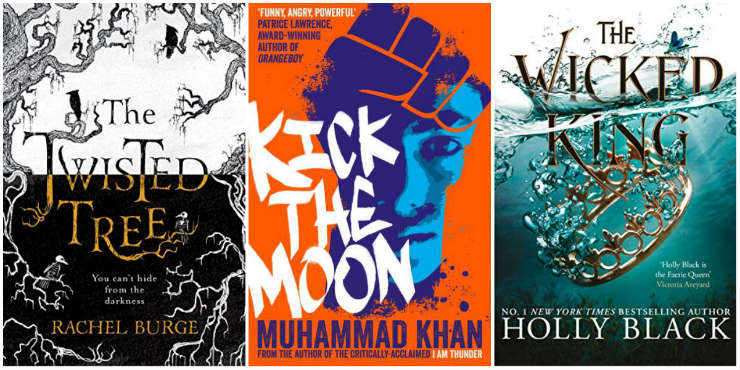 The Twisted Tree, by Rachel Burge

"Martha can tell things about a person just by touching their clothes, as if their emotions and memories have been absorbed into the material. It started the day she fell from the tree at her grandma's cabin and became blind in one eye.

"Determined to understand her strange ability, Martha sets off to visit her grandmother, Mormor - only to discover Mormor is dead, a peculiar boy is in her cabin and a terrifying creature is on the loose. Then the spinning wheel starts creaking, books move around and terror creeps in."

The Curses, by Laure Eve

Sequel to the YA Book Prize-shortlisted The Graces.

"Summer Grace has had enough of secrets. They've been tearing her family apart for generations, and one in particular caused the death of her best friend, Wolf.

"But now Wolf is back. Supposedly returned from having run away - though Summer knows that's not what happened. He was resurrected, brought back to life by her ex-best friend - an ex-best friend who is now swearing revenge on her family. And her family won't believe that whatever this thing is, it's not Wolf. He's dangerous, and Summer is desperate - so desperate that she might just be forced to turn to the one friend she never thought she'd turn to again. Because something is stirring - something so powerful that even the Graces will fear it."

Conclusion of the quartet which began with Brock, Pike and the Carnegie-shortlisted Rook. All four stories have been collected together as The Truth of Things.

"Things are tense at home for Nicky and Kenny. Their mum's coming to visit and it will be the first time they've seen her in years. A lot has changed since they were little and Nicky's not so sure he's ready to see her again.

"When they head for a trek across the moors to take their minds off everything, a series of unforeseen circumstances leaves the brothers in a vulnerable and very dangerous position. There might even be a chance that this time not everyone will make it home alive..."

From the author of The Art of Being Normal.

"Ro Snow is the girl no-one notices - she doesn't go to parties and she doesn't have friends over. Besides, even if anyone tried to call on her they'd discover that no. 56 isn't her house at all - it's her decoy house, where she tells people to pick her up and drop her off so she can hide who she really is and where she really lives. And she certainly doesn't have a best friend because having friends means opening up, telling the truth and there is one secret she can never risk revealing again.

" But when Tanvi turns up, Ro starts to put other things before her secret first - like her love of singing, her crush on good looking and popular Luke, her budding friendship with the adorable Tanvi - and it's only a matter of time before everything comes out and everything changes!"

Outside, by Sarah Ann Juckes

"Ele is kept captive in a small room by a man known as 'Him'. She has never been Outside but she knows it's there and she's determined to prove it. When Ele eventually escapes, she is forced to question everything she has ever known."

A Curse So Dark and Lonely, by Brigid Kemmerer

YA fantasy update of the Beauty and the Beast story from the author of Letters to the Lost.

"Fall in love, break the curse. It once seemed so easy to Prince Rhen, the heir to Emberfall. Cursed by a powerful enchantress to repeat the autumn of his eighteenth year over and over, he knew he could be saved if a girl fell for him. But that was before he learned that at the end of each autumn, he would turn into a vicious beast hell-bent on destruction. That was before he destroyed his castle, his family, and every last shred of hope.

"Nothing has ever been easy for Harper Lacy. With her father long gone, her mother dying, and her brother barely holding their family together while constantly underestimating her because of her cerebral palsy, she learned to be tough enough to survive. But when she tries to save someone else on the streets of Washington, DC, she's instead somehow sucked into Rhen's cursed world. Break the curse, save the kingdom."

The Fork, the Witch, and the Worm: tales from Alagaësia, volume 1, by Christopher Paolini & John Jude Palencar

Three stories set in the universe of Eragon and the Inheritance Cycle.

"A wanderer and a cursed child. Spells and magic. And dragons, of course. Welcome back to the world of Alagaësia. It's been a year since Eragon departed Alagaësia in search of the perfect home to train a new generation of Dragon Riders. Now he is struggling with an endless sea of tasks: constructing a vast dragonhold, wrangling with suppliers, guarding dragon eggs and dealing with belligerent Urgals and haughty elves. Then a vision from the Eldunarí, unexpected visitors and an exciting Urgal legend offer a much-needed distraction and a new perspective."

"Edited by National Book Award finalist Ibi Zoboi, Black Enough is an essential collection of captivating stories about what it's like to be young and black in America."

Including contributions from Renee Watson, Jason Reynolds and Nic Stone.

King of Scars, by Leigh Bardugo

First in a much anticipated new duology from the Grishaverse.

"Nikolai Lantsov has always had a gift for the impossible. No one knows what he endured in his country's bloody civil war - and he intends to keep it that way. Now, as enemies gather at his weakened borders, the young king must find a way to refill Ravka's coffers, forge new alliances, and stop a rising threat to the once-great Grisha Army. Yet with every day a dark magic within him grows stronger, threatening to destroy all he has built.

"With the help of a young monk and a legendary Grisha Squaller, Nikolai will journey to the places in Ravka where the deepest magic survives to vanquish the terrible legacy inside him. He will risk everything to save his country and himself. But some secrets aren't meant to stay buried - and some wounds aren't meant to heal."

The Wicked King, by Holly Black

Sequel to The Cruel Prince.

"After the jaw-dropping revelation that Oak is the heir to Faerie, Jude must keep her younger brother safe. To do so, she has bound the wicked king, Cardan, to her, and made herself the power behind the throne. But Cardan does everything in his power to humiliate and undermine her, even as his fascination with her remains undiminished.

"When it becomes all too clear that someone close to Jude means to betray her, Jude must uncover the traitor and fight her own complicated feelings for Cardan to maintain control as a mortal in a Faerie world."

Two Can Keep a Secret, by Karen M. McManus

New thriller from the author of the very successful One of Us is Lying.

"Ellery's never been to Echo Ridge, but she's heard all about it. It's where her aunt went missing at age sixteen, never to return. Where a Homecoming Queen's murder five years ago made national news. And where Ellery now has to live with a grandmother she barely knows, after her failed-actress mother lands in rehab. No one knows what happened to either girl, and Ellery's family is still haunted by their loss.

"Malcolm grew up in the shadow of the Homecoming Queen's death. His older brother was the prime suspect and left Echo Ridge in disgrace. His mother's remarriage vaulted her and Malcolm into Echo Ridge's upper crust, but their new status grows shaky when mysterious threats around town hint that a killer plans to strike again. No one has forgotten Malcolm's brother - and nobody trusts him when he suddenly returns to town."

The Other Side of Lost, by Nick Lake

Sci-fi survival story set in the Alaskan wilderness from the author of Satellite.

"16-year-old Emily and her little brother Aidan are onboard a plane bound for Anchorage. When the plane crashes, both kids and the pilot barely escape with their lives and are left to fight for survival in the Alaskan wilderness. But there is worse to come - Emily and Aidan are being chased, and their shady, unknown pursuers are closing in.

"As the kids go on the run, Emily finds herself in greater danger than she could have imagined. Because nothing in her life is what it seems - not even the things she holds dearest of all."

Kick the Moon, by Muhammad Khan

Set in the same universe as Khan’s previous hit I Am Thunder, this is a story about toxic masculinity, bullying and finding your own voice.

"15-year-old Ilyas is under pressure from everyone: GCSEs are looming and his teachers just won't let up, his dad wants him to join the family business and his mates don't care about any of it. There's no space in Ilyas' life to just be a teenager.

"Serving detention one day, Ilyas finds a kindred spirit in Kelly Matthews, who is fed up with being pigeonholed as the good girl, and their friendship blows the social strata of high school wide open. But when Kelly catches the eye of one of the local bad boys, Imran, he decides to seduce her for a bet - and Ilyas is faced with losing the only person who understands him.

"Standing up to Imran puts Ilyas' family at risk, but it's time for him to be the superhero he draws in his comic-books, and go kick the moon."

"A lively and accessible book for teens on the history, pioneers, theories, questions, arguments, and daily reality of feminism today. Combining insightful text with graphic illustrations, this engaging book introduces young adult readers to a subject that should matter to everyone."

With a foreword by Gemma Cairney.