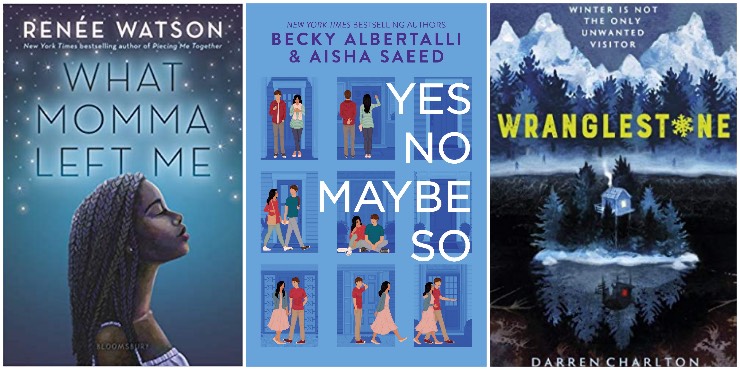 "The woods surrounding Miss Qinzella Penniquiqul Thistle Crumpet's Camp for Hardcore Lady-Types are home to more incredible magical critters and beings than anyone could possibly imagine. Unfortunately, on this particular day, it's pouring rain, and each and every 'Jane has been tasked with just one job: stay inside, stay dry and DON'T get into trouble.

"Confined to the Mess Hall, Jo and Molly give tabletop roleplaying a try, while Ripley, April and Mal venture a little further afield after discovering a secret tunnel beneath the Kitchens - and the colossal prehistoric bug that lives there!"

"Spring comes to the supernatural town of Blitheton, which can only mean one thing: It's time for the annual mermaid festival! Werewolf barista Julie meets one of her girlfriend Selena's friends, but as per usual, things take a turn for the worst. Why does everything seem to go wrong for Julie and Selena? Is the universe conspiring against them, or is it something more sinister? More importantly, will their relationship survive once it starts taking on water?"

"It's been eighteen months since the Raxter School for Girls was put in quarantine. The Tox turned the students strange and savage, the teachers died off one by one. Cut off from the mainland, the girls don't dare wander past the school's fence where the Tox has made the woods wild and dangerous. They wait for the cure as the Tox takes; their bodies becoming sick and foreign, things bursting out of them, bits missing.

"But when Byatt goes missing, Hetty will do anything to find her best friend, even if it means breaking quarantine and braving the horrors that lie in the wilderness past the fence. As she digs deeper, she learns disturbing truths about her school and what else is living on Raxter Island. And that the cure might not be a cure at all."

Diary of a Confused Feminist, by Kate Weston

"15-year-old Kat wants to do good feminism, although she's not always sure what that means. She also wants to be a writer, get together with Hot Josh (is this a feminist ambition?), win at her coursework and not make a total embarrassment of herself at all times.

"But the path to true feminism is filled with mortifying incidents, muddling moments and Instagram hell. And it doesn't help that Hot Josh is just, well, properly, distractingly hot. And when everything at school starts to get a bit too much, Kat knows she's lost her way, and the only way forward is to ask for help."

What Momma Left Me, by Renée Watson

"Serenity knows she is good at keeping secrets, and she's got a whole lifetime's worth of them. Her mother is dead, her father is gone, and starting life over at her grandparents' house is strange.

"Luckily, certain things seem to hold promise: a new friend, a new church, a new school. But when her brother starts making poor choices, and her grandparents believe in a faith that Serenity isn't sure she understands, it is the power of love that will keep her sure of just who she is."

The Pure Heart, by Trudi Tweedie

"When Iseabail is employed by a wealthy merchant to be his daughter's companion, her life changes forever. Transported from her remote island home to the Scottish borderlands, Iseabail is unnerved both by her precocious young charge and the house's secrets: a hidden chapel, servants who speak in a foreign tongue, a mute stableboy. And then the merchant returns with a mysterious cargo. Why has Iseabail really been summoned here? And will she ever make it back home?"

"Charlie didn't think Nick could ever like him back, but now they're officially boyfriends. Nick's even found the courage to come out to his mum. But coming out isn't just something that happens once - there's Nick's older brother, and a school trip to Paris, not to mention all the other friends and family - and life can be hard, even with someone who loves you by your side. As their feelings get more serious, Charlie and Nick will need each other more than ever before."

Yes No Maybe So, by Becky Albertalli & Aisha Saeed

"Jamie Goldberg is cool with volunteering for his local state candidate - as long as he’s behind the scenes. There’s no way he’d ever knock on doors to ask people for their votes... until he meets Maya.

"Maya Rehman’s having the worst Ramadan ever. Her best friend is too busy to hang out, her summer trip is cancelled, her parents are separating and now her mother thinks the solution to her problems is political canvassing - with some awkward guy she hardly knows ...

"Going door to door isn’t exactly glamorous, but maybe it’s not the worst thing in the world. After all, the polls are getting closer - and so are Maya and Jamie. Mastering local activism is one thing. Navigating the cross-cultural crush of the century is another thing entirely."

From the author of Me Mam, Me Dad, Me

"15-year-old Tyler's teenage angst turns to outright rebellion when his family leave London for a new life in Yorkshire. He's angry with his parents about the upheaval and furious at losing his home. With only the dog to confide in, Tyler has no idea that a chance meeting with a skinny girl called Spider will lead him into a world he never even knew existed. Spider is living on the streets and Tyler finds himself spinning a tangled web of lies in his efforts to help her escape from this dark and dangerous place."