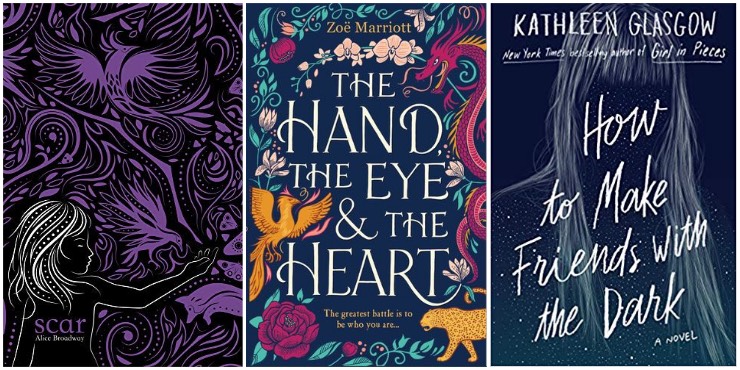 Home Girl: or the miseducation of Naomi Brisset, by Alex Wheatle

New addition to the series set around the Crongton estate.

"'This isn't my home. Haven't had a proper home since... This is just somewhere I'll be resting my bones for a week and maybe a bit. This time next year you'll forget who I am. I haven't got a diddly where I'll be by then. But I'm used to it'

"Home Girl is the story of Naomi, a teenage girl growing up fast in the care system. It is a wholly modern story which sheds a much needed light on what can be an unsettling life - and the consequences that can follow when children are treated like pawns on a family chessboard."

We are Blood and Thunder, by Kesia Lupo

"In a sealed-off city, a young woman, Lena, is running for her life. She has been sentenced to death and her only way to survive is to trust those she has been brought up to fear - those with magic.

"On the other side of the locked gates is a masked lady, Constance, determined to find a way back in. Years ago she escaped before her own powers were discovered. But now she won't hide who she is any longer.

"A powerful and terrifying storm cloud engulfs the city. But this is more than a thunderstorm. This is a spell, and the truth behind why it has been cast is more sinister than anyone can imagine. But what neither Lena and Constance realise is that the stormcloud binds them - without it, without each other, neither can get what they desire."

Follow-up to A Jigsaw of Fire and Stars.

"Three girls born on the same day in wolf light are bound together to protect the world. They can dazzle or destroy. They have wind-song and fire-fury at their fingertips, but their enemies are everywhere. From the bleak steppes to the tropical forests of Ghana and the stormy moors of Cornwall, the lands they love are plundered and poisoned. The girls must rally to perfect their skills and prove the strength of sister-magic."

Opposite of Always, by Justin A. Reynolds

Pitched as Groundhog Day meets The Fault in Our Stars:

"When Jack and Kate meet at a party, he knows he's falling - hard. Soon she's meeting his best friends and Kate wins them over as easily as she did Jack. But then Kate dies. And their story should end there. Yet Kate's death sends Jack back to the beginning, the moment they first meet, and Kate's there again. Healthy, happy, and charming as ever.

"Jack isn't sure if he's losing his mind. Still, if he has a chance to prevent Kate's death, he'll take it. Even if that means believing in time travel. However, Jack will learn that his actions are not without consequences. And when one choice turns deadly for someone else close to him, he has to figure out what he's willing to do to save the people he loves."

The Disconnect, by Keren David

"Could you disconnect from your phone for six weeks? An eccentric entrepreneur has challenged Esther's year group to do just that, and the winners will walk away with £1,000. For Esther, whose dad, sister and baby nephew live thousands of miles away in New York, the prize might be her only chance to afford flights for a visit."

The Bookseller calls this 'Sleeping Beauty with a Black Mirror twist.'

"Laura is dying. Her last desperate hope is to be frozen until she can be cured.

"But what happens when you wake up one day and the world has moved on forty years? Your best friend is middle-aged, your parents are presumed dead. Can you find a place to belong? Could you build a new life, while solving the mystery of what happened to the old one?"

How to Make Friends with the Dark, by Kathleen Glasgow

"Tiger Tolliver and her mom have always been a team, but recently Tiger has started to wonder if their well-oiled machine is really so well-oiled after all. Because, come to think of it, her mom needs to control everything. The songs on the radio. The truth about the dad she's never met. Whether or not she goes to school dances. She can never just be on her own. And this doesn't even cover the rest of the sixteen million nerve-wracking, day-killing OTHER things she's got going on."

"Marianne has been training to be the Viper for her entire life - to serve and protect the King and the citizens of The Twelve Isles - but to become the Viper and protect the islands she loves she must find the strength to defeat her father."

Music and Malice in Hurricane Town, by Alex Bell

"Jude Lomax is playing in a jazz band at the funeral of murdered cajou queen Ivory Monette when she finds herself possessed by Ivory's vengeful spirit. The only way Jude can free herself is to take a journey deep into the dangerous underbelly of Hurricane Town."

"The explosive finale to the best-selling INK trilogy sees Leora struggling to reconcile her past and her future - and recognising that there may be no easy answers."

The Fall of Crazy House, by James Patterson & Gabrielle Charbonnet

"Twin sisters Becca and Cassie barely escaped the Crazy House alive. Now they're trained, skilled fighters who fear nothing - not even the all-powerful United. Separated once again by the Resistance, Becca is sent on a mission to assassinate the President of the United, while Cassie uncovers the mystery of the past and how the United rose to power.

"Together the sisters hold the key to defeating the despotic government and freeing the people of the former United States. But to win this war, will the girls have to become the very thing they've sworn to hate?"

The Red Scrolls of Magic, by Cassandra Clare & Wesley Chu

"All Magnus Bane wanted was a vacation - a lavish trip across Europe with Alec Lightwood, the Shadowhunter who against all odds is finally his boyfriend. But as soon as the pair settle in Paris, an old friend arrives with news about a demon-worshipping cult called the Crimson Hand that is bent on causing chaos around the world. A cult that was apparently founded by Magnus himself. Years ago. As a joke.

"Now Magnus and Alec must race across Europe to track down the Crimson Hand and its elusive new leader before the cult can cause any more damage."

The Hand, the Eye and the Heart, by Zoë Marriott

Gender identity is explored in a fantasy adventure set in a fairytale version of China.

"Zhilan was assigned female at birth. Despite a gift for illusions, they know they are destined to live out their life within the confines of the women's quarter. But when civil war sets the empire aflame, Zhilan is determined to save their disabled father from the battlefield. By taking his place.

"Surviving brutal army training as a boy - Zhi - is only the first challenge. In the glittering court of the Land of Dragons, love and betrayal are two sides of the same smile, and soon the fate of a nation rests on Zhi's shoulders. But to win, they must decide where their heart truly belongs."