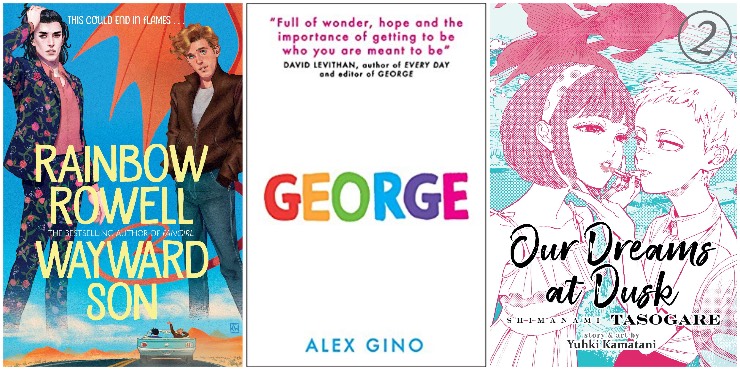 Charlie and Nick's story continues in the second and third instalments of this graphic novel series.

The Love and Lies of Rukhsana Ali, by Sabina Khan

"Seventeen-year-old Rukhsana Ali tries her hardest to live up to her conservative Muslim parents' expectations, but lately she's finding that impossible to do. She rolls her eyes when they blatantly favour her brother and saves her crop tops and makeup for parties her parents don't know about. If she can just hold out another few months, Rukhsana will be out of her familial home and away from her parents' ever-watchful eyes at Caltech, a place where she thinks she can finally be herself.

"But when she is caught kissing her girlfriend Ariana, her devastated parents take Rukhsana to Bangladesh, where everything she had been planning is out of reach. There, immersed in a world of tradition and arranged marriages, Rukhsana finds the perspective she's been looking for in her grandmother's old diary. The only question left for her to answer is: Can she fight for the life she wants without losing her family in the process?"

Sequel to Carry On: the rise and fall of Simon Snow.

"Simon Snow did everything he was supposed to do. He beat the villain. He won the war. He even fell in love. Now comes the good part, right? Now comes the happily ever after. So why can't Simon Snow get off the couch? What he needs, according to his best friend, is a change of scenery. He just needs to see himself in a new light.

"That's how Simon and Penny and Baz end up in a vintage convertible, tearing across the American West. They find trouble, of course. (Dragons, vampires, skunk-headed things with shotguns.) And they get lost. They get so lost, they start to wonder whether they ever knew where they were headed in the first place."

Our Dreams At Dusk: Shimanami Tasogare, by Yuhki Katamani

Four-volume manga series following the experiences of gay high schooler Tasuku and his LGBT friends from a variety of backgrounds:

"A boy comes to terms with his identity as a mixed-race gay teen - then at university he finds his wings as a drag artist, The Black Flamingo. Sometimes, we need to take charge, to stand up wearing pink feathers - to show ourselves to the world in bold colour.

"I masquerade in makeup and feathers and I am applauded."

Laura Dean Keeps Breaking Up With Me, by Mariko Tamaki & Rosemary Valero-O'Connell

"Laura Dean, the most popular girl in high school, was Frederica Riley's dream girl: charming, confident, and SO cute. There's just one problem: Laura Dean is maybe not the greatest girlfriend.

"Reeling from her latest break up, Freddy's best friend, Doodle, introduces her to the Seek-Her, a mysterious medium who leaves Freddy some cryptic parting words: Break up with her."

Her Royal Highness, by Rachel Hawkins

"Millie Quint is devastated when she discovers that her sort-of-best friend/sort-of-girlfriend has been kissing someone else. Heartbroken and ready for a change of pace, Millie decides to apply for scholarships to boarding schools... the farther from Houston the better.

"Soon, Millie is accepted into one of the world's most exclusive schools, located in the rolling highlands of Scotland. Here, the country is dreamy and green; the school is covered in ivy, and the students think her American-ness is adorable. The only problem: Mille's roommate Flora is a total princess. She's also an actual princess. Of Scotland.

"At first, the girls can't stand each other, but before Millie knows it, she has another sort-of-best-friend/sort-of-girlfriend. Princess Flora could be a new chapter in her love life, but Millie knows the chances of happily-ever-afters are slim...after all, real life isn't a fairy tale... or is it?"

Running with Lions, by Julian Winters

"Bloomington High School Lions star goalie Sebastian Hughes should be excited about his senior year: His teammates are amazing, and he's got a coach who doesn't ask anyone to hide their sexuality. But when his estranged childhood-best-friend Emir Shah shows up at summer training camp, Sebastian realises the team's success may end up in the hands of the one guy who hates him.

"Determined to reconnect with Emir for the sake of the Lions, he sets out to regain Emir's trust. But to Sebastian's surprise, sweaty days on the pitch, wandering the town's streets, and bonding on the weekends spark more than just friendship between them."

"Meet Morgan and Eric: born on the same day, at the same time and bonded for life. In this moving dual narrative, we meet them every birthday from the age of 13, as Eric figures out who he is, as Morgan decides to live as her true self, and as they realise they are inextricably part of each other."

Alex in Wonderland, by Simon Green

"Painfully shy Alex lands a summer job at Wonderland, a run-down seaside arcade. He gets to know the other teen misfits who work there, and he even starts developing feelings for co-worker Ben. Then, as debtors close in, Alex and his new friends take it on themselves to save their employer. But in Wonderland nothing is quite what it seems."

"When people look at George, they think they see a boy. But she knows she's not a boy. She knows she's a girl. George thinks she'll have to keep this a secret forever. Then her teacher announces that their class play is going to be Charlotte's Web. George really, really, REALLY wants to play Charlotte. But the teacher says she can't even try out for the part... because she's a boy."

Yay! You're Gay! Now What?: A gay boy's guide to life, by Riyadh Khalaf

"In this personal, heartfelt go-to guide for young queer guys, YouTuber and presenter Riyadh Khalaf shares frank advice about everything from coming out to relationships, as well as interviews with inspirational queer role models, and encouragement for times when you're feeling low. There's a support section for family and friends written by Riyadh's parents and loads of hilarious, embarrassing, inspiring and moving stories from gay boys around the world."