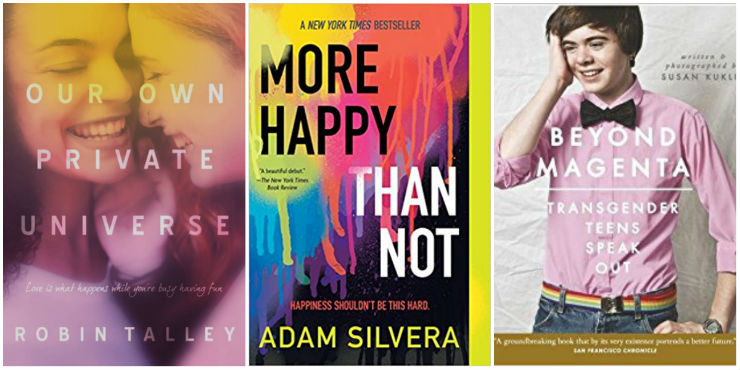 This LGBT History Month, we've made our Young Adult LGBT recommendation list bigger and better than ever. Find your new favourite book here or find even more suggestions on our 2017 list.

S/he, by Catherine Bruton

"The new kid at school is not like anyone Kat has met before. Raven is 'gender-fluid'. Not a boy. Or a girl. But kind of both - sometimes, sort of. At first the class are fascinated, intrigued. But people like labels. They like to put things in boxes. Boy? Girl? Blue? Pink? Do you need to make a choice? Does anyone have a right to know? You decide."

"Today will change Adam Thorn's life. Between his religious family, unpleasant boss and his ex-boyfriend, the bindings of his world are coming undone. And way across town, a ghost has risen from the lake. Is there time for Adam to find his release?"

Release is also available as an eBook on OverDrive and an eAudiobook on BorrowBox.

The Gentleman's Guide to Vice and Virtue, by Mackenzi Lee

"Henry 'Monty' Montague doesn't care that his roguish passions are far from suitable for the gentleman he was born to be. But as Monty embarks on his grand tour of Europe, his quests for pleasure and vice are in danger of coming to an end. Not only does his father expect him to take over the family's estate upon his return, but Monty is also nursing an impossible crush on his best friend and traveling companion, Percy. So Monty vows to make this yearlong escapade one last hedonistic hurrah and flirt with Percy from Paris to Rome.

"But when one of Monty's reckless decisions turns their trip abroad into a harrowing manhunt, it calls into question everything he knows, including his relationship with the boy he adores."

History is All You Left Me, by Adam Silvera

"OCD-afflicted seventeen-year-old, Griffin, has just lost his first love - his best friend, ex-boyfriend and the boy he believed to be his ultimate life partner - in a drowning accident. In a desperate attempt to hold onto every last piece of the past, a broken Griffin forges a friendship with Theo's new college boyfriend, Jackson. And Griffin will stop at nothing to learn every detail of Theo's new college life, and ultimate death.

"But as the grieving pair grows closer, readers will question Griffin's own version of the truth - both in terms of what he's willing to hide, and what true love ultimately means."

More Happy Than Not, by Adam Silvera

"In the months after his father's suicide, it's been tough for sixteen-year-old Aaron Soto to find happiness again - but he's still gunning for it. With the support of his girlfriend Genevieve and his overworked mom, he's slowly remembering what that might feel like. But grief and the smile-shaped scar on his wrist prevent him from forgetting completely.

"When Genevieve leaves for a couple of weeks, Aaron spends all his time hanging out with this new guy, Thomas. Aaron's crew notices, and they're not exactly thrilled. But Aaron can't deny the happiness Thomas brings or how Thomas makes him feel safe from himself, despite the tensions their friendship is stirring with his girlfriend and friends.

"Since Aaron can't stay away from Thomas or turn off his newfound feelings for him, he considers turning to the Leteo Institute's revolutionary memory-alteration procedure to straighten himself out, even if it means forgetting who he truly is.

"Why does happiness have to be so hard?"

"Grayson Sender has been holding onto a secret for what seems like forever: 'he' is a girl on the inside, stuck in the wrong gender's body. The weight of this secret is crushing, but sharing it would mean facing ridicule, scorn, rejection or worse.

"Despite the risks, Grayson's true self itches to break free. Will new strength from an unexpected friendship and a caring teacher's wisdom be enough to help Grayson step into the spotlight she was born to inhabit?"

"Harper has tried to forget the past and fit in at expensive boarding school Duncraggan Academy. Her new group of friends are tight; the kind of girls who Harper knows have her back. But Harper can't escape the guilt of her twin sister's Jenna's death, and her own part in it - and she knows no-one else will ever really understand.

"But new girl Kirsty seems to get Harper in ways she never expected. She has lost a sister too. Harper finally feels secure. She finally feels loved. As if she can grow beyond the person she was when Jenna died. Then Kirsty's behaviour becomes more erratic. Why is her life a perfect mirror of Harper's? And why is she so obsessed with Harper's lost sister? Soon, Harper's closeness with Kirsty begins to threaten her other relationships, and her own sense of identity."

"Here's what sixteen-year-old Lauren knows: she's not like other girls. She also knows it's problematic to say that - what's wrong with girls? She's even fancied some in the past - but if you were stuck in St Agnes's, her posh all-girls school in Ireland, you'd feel like that too. Here everyone's expected to be Perfect Young Ladies - it's even a song in the painfully-cheesy and sexist musical they're putting on this year, directed by Lauren's arch-nemesis.

"Lauren is not like other girls, and nor is her friend Evan, who's just come out as a trans boy - which Lauren knows she's supposed to be cool with but still feels betrayed by. (Having had an unrequited crush on Evan for years doesn't help, either). Why can't everyone just be themselves without obsessing over labels? Then Lauren discovers she's pregnant - the most girlish thing of all."

"The two boys kissing are Craig and Harry. They're hoping to set the world record for the longest kiss. They're not a couple, but they used to be. Peter and Neil are a couple. Their kisses are different. Avery and Ryan have only just met and are trying to figure out what happens next. Cooper is alone. He's not sure how he feels.

"As the marathon progresses, these boys, their friends and families evaluate the changing nature of feelings, behaviour and this crazy thing called love."

"When Cameron Post's parents die suddenly in a car crash, her shocking first thought is relief. Relief they'll never know that, hours earlier, she had been kissing a girl.

"But that relief doesn't last, and Cam is forced to move in with her conservative aunt Ruth and her well-intentioned but hopelessly old-fashioned grandmother. She knows that from this point on, her life will forever be different. Survival in Miles City, Montana, means blending in and leaving well enough alone, and Cam becomes an expert at both.

"Then Coley Taylor moves to town. Beautiful, pickup-driving Coley is a perfect cowgirl with the perfect boyfriend to match. She and Cam forge an unexpected and intense friendship, one that seems to leave room for something more to emerge. But just as that starts to seem like a real possibility, ultrareligious Aunt Ruth takes drastic action to 'fix' her niece."

Simon vs. the Homo Sapiens Agenda, by Becky Albertalli

"16-year-old and not-so-openly gay Simon Spier prefers to save his drama for the school musical. But when an email falls into the wrong hands, his secret is at risk of being thrust into the spotlight. And worse still, so will the privacy of 'Blue', the pen name of the boy he's been emailing.

"With messy dynamics emerging in Simon's once tight-knit group of friends, and his email correspondence with Blue growing more flirtatious every day, Simon's life suddenly becomes just a little complicated. Now Simon has to find a way to step out of his comfort zone before he's pushed out - without alienating his friends, compromising himself, or fumbling a shot at happiness with the most confusing, adorable guy he's never met."

"Any great friendship can be as confusing, treacherous, inspiring and wonderful as any great romance. Naomi and Ely have been best friends forever. Naomi loves and is in love with Ely, and Ely loves Naomi, but prefers to be in love with boys.

"So they create their 'No Kiss List' of people neither of them is allowed to kiss. And this works fine - until Bruce. Bruce is Naomi's boyfriend, so there's no reason to put him on the List. But Ely kissed Bruce - and the resulting fallout is going to shake up the world!"

Our Own Private Universe, by Robin Talley

"15-year-old Aki Simon has a theory. And it's mostly about sex. No, it isn't that kind of theory. Aki already knows she's bisexual - even if, until now, it's mostly been in the hypothetical sense. Aki's theory is that she's only got one shot at living an interesting life - and that means she's got to stop sitting around and thinking so much. It's time for her to actually do something. Or at least try.

"So when Aki and her friend Lori set off on a trip to a small Mexican town for the summer, and Aki meets Christa - slightly-older, far-more-experienced - it seems her theory is prime for the testing. But something tells her it's not going to be that easy."

We Are Okay, by Nina LaCour

"Marin hasn't spoken to anyone from her old life since the day she left everything behind. No one knows the truth about those final weeks. Not even her best friend Mabel. But even thousands of miles away from the California coast, at college in New York, Marin still feels the pull of the life and tragedy she's tried to outrun.

"Now, months later, alone in an emptied dorm for winter break, Marin waits. Mabel is coming to visit and Marin will be forced to face everything that's been left unsaid and finally confront the loneliness that has made a home in her heart."

Trans Mission: my quest for a beard, by Alex Bertie

"Being a teenager is difficult enough, but having to go through puberty whilst realising you're in the wrong body means dealing with a whole new set of problems: bullying, self-doubt and in some cases facing a physical and medical transition.

"Alex is an ordinary teenager: he likes pugs, donuts, retro video games and he sleeps with his socks on. He's also transgender, and was born female. He's been living as a male for the past few years and he has recently started his physical transition. Throughout this book, Alex will share what it means to be in his shoes, as well as his personal advice to other trans teens."

Beyond Magenta: transgender teens speak out, by Susan Kuklin

"Author and photographer Susan Kuklin met and interviewed six transgender or gender-neutral young adults and used her considerable skills to represent them thoughtfully and respectfully before, during, and after their personal acknowledgment of gender identity. Portraits, family photographs and candid images grace the pages, augmenting the emotional and physical journey each youth has taken."

This Book is Gay, by Juno Dawson

"Former PSHCE teacher and acclaimed YA author Juno Dawson, formerly known as James Dawson, gives an uncensored look at sexual orientation and gender identity. Including testimonials from people across the gender and sexual spectrums, this frank, funny, fully inclusive book explores everything anyone who ever dared to wonder wants to know - from sex to politics, how to pull, stereotypes, how to come-out and more."