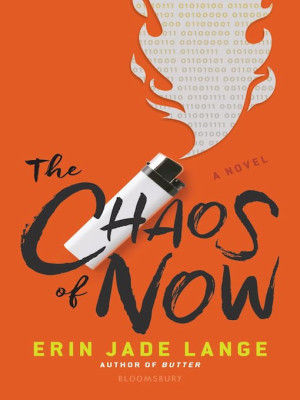 Bullying can be frightening and isolating, so we hope that these titles help young people who are being bullied to feel less alone, and seek help.

Even if they're not being bullied, it's important for children to understand how it feels to be in such a situation and learn what to do if they experience or witness bullying.

In his debut novel, poet Benjamin Zephaniah tackles the moving story of a young man, Martin, whose life is completely changed when his face is badly scarred in a joyriding accident.

The Chaos of Now, by Erin Lange

When Jordan Bishop set himself on fire at Haver High school as a result of internet bullying, it triggered a nationwide crackdown. New laws empower teachers to become cyber snoops in case of abuse on social media. For teen hacker, Eli Bennett, the laws put fundamental freedoms at risk. And he's not alone in thinking this.

Approached by two mysterious hackers, Eli is recruited into a group that wants justice for Jordan the way Jordan would've wanted it. But what starts as a bit of fun to rile the cyber snoops soon spirals out of control. Revenge on Jordan's bullies could be classed as bullying itself. At best, Eli's school career is in jeopardy, at worst, once more lives are at risk.

Borrow The Chaos of Now →

The Teenage Guide to Friends, by Nicola Morgan

Essential reading for teenagers and the adults who care about them. Contents include a section on making friends, keeping friendships strong, and what happens when they break down - as well as a look at online friendships, cyber-bullying, toxic friendships and frenemies, and empathy. There is also a section on personality types - introverts and extroverts - and quizzes to help you discover what sort of person you are, how you relate to others and how to deal with difficult situations.

Borrow The Teenage Guide to Friends →

Open Your Heart: learn to love your life and love yourself, by Gemma Cairney & Aurelia Lange

Full of honest and practical advice from The Surgery agony aunt Gemma Cairney and a whole host of trained professionals and real people, Open Your Heart is a best friend in a book. From heartbreak and heartache to body image and everything in between, it will help you learn to love your body, your friends and your family, and tell you what to do if things go wrong.

All I Know Now: wonderings and reflections on growing up gracefully, by Carrie Hope Fletcher

We all know that growing up is hard to do, and sometimes the only thing that makes it better are the reassuring words of someone who has walked that bumpy road just a few steps ahead of you and somehow ended up as a fully-functioning adult. Thanks to her phenomenally popular YouTube videos, Carrie Hope Fletcher has become an 'honourary big sister' to hundreds of thousands of young people who turn to her for advice, friendship and, most of all, the knowledge that things will get better.

Part memoir, part advice guide, this book includes Carrie's thoughts on some of the topics she's asked about most regularly: bullying, body image, relationships and perhaps the scariest question of all: what does the future hold for me?

Borrow All I Know Now →

As she unpacks in her new bedroom, Ella is irresistibly drawn to the big old house that she can see out of her window. Surrounded by overgrown gardens, barbed wire fences and 'keep out' signs. It looks derelict.

But that night a light goes on in one of the windows. And the next day she sees a girl in the grounds. Ella is hooked, the house has a story to tell, she is sure of it. Enter Thornhill, Institute for Children, and discover the dark secrets that lie within. But once inside, will you ever leave?

This is a dark tale, highly illustrated and an affecting portrayal of bullying and its consequences.

Armed with a suitcase and an old laundry bag filled with clothes, Kasienka and her mother leave Poland and head for the UK to find her father. Life is lonely for Kasienka. At home her mother's heart is breaking and at school Kasienka finds it impossible to make new friends.

Borrow The Weight of Water →

School should be a safe place for Jess, a refuge from her difficult home life - but thanks to Kez and her friends, it's everything she dreads.

Despite being beautiful and popular, Kez's life isn't any sweeter. She clings to the fact she is better off than Jess - or so she thinks.

The Icarus Show, by Sally Christie

Alex has worked out a foolproof way to avoid being picked on. Don't react. It's so simple, it's brilliant! David does react and becomes an outcast, nicknamed Bogsy. He's branded a weirdo and Alex is determined to avoid the same fate.

But one day, Alex gets a note in his bag that forces him out of his safe little world. Who sent the note? And is it true - will a boy really fly?

This moving novel deals with the pain of social isolation and bullying so bad it leads to an attempted suicide. It’s utterly absorbing and thought provoking.

We Are All Made of Molecules, by Susin Nielsen

Meet Stewart. He's geeky, gifted, and sees things a bit differently to most people. His mum has died and he misses her all the more now he and Dad have moved in with Ashley and her mum. Meet Ashley. She's popular, cool, and sees things very differently to her new family. Her dad has come out and moved out - but not far enough. And now she has to live with a freakazoid step-brother.

Stewart can't quite fit in at his new school, and Ashley can't quite get used to her totally awkward home, which is now filled with some rather questionable decor. And things are about to get a whole lot more mixed up when these two very different people attract the attention of school hunk Jared.

Borrow We Are All Made of Molecules →

Simon vs. the Homo Sapiens Agenda, by Becky Albertalli

16-year-old and not-so-openly gay Simon Spier prefers to save his drama for the school musical. But when an email falls into the wrong hands, his secret is at risk of being thrust into the spotlight. And worse still, so will the privacy of 'Blue', the pen name of the boy he's been emailing. With messy dynamics emerging in Simon's once tight-knit group of friends, and his email correspondence with Blue growing more flirtatious every day, Simon's life suddenly becomes just a little complicated.

Now Simon has to find a way to step out of his comfort zone before he's pushed out - without alienating his friends, compromising himself, or fumbling a shot at happiness with the most confusing, adorable guy he's never met.

Thirteen Reasons Why, by Jay Asher

Clay Jensen returns home from school one day to find a box, with his name on it, lying on the porch. Inside he discovers 13 cassette tapes recorded by Hannah Baker, his classmate, who committed suicide two weeks earlier. On tape, Hannah explains that there are 13 reasons why she did what she did, and Clay is one of them.

The Chocolate War, by Robert Cormier

The headmaster of Trinity College asks Archie Costello, the leader of the Vigils, a secret society that rules the school, to help with the selling of 20,000 boxes of chocolates in the annual fund-raising effort. Archie sees the chance of adding to his power - he is the Assigner, handing out to the boys tasks to be performed if they are to survive in the school.

"Freshman, Jerry Renault, a newcomer to the corrupt regime, refuses to sell chocolates. Enormous mental and physical pressure is put on him but he will not give in - the result is an inevitable, explosive tragedy.

The Truth About Alice, by Jennifer Mathieu

In this remarkable novel, four Healy High students - the party girl, the car accident survivor, the ex best friend and the boy next door - tell all they know. But exactly what is the truth about Alice? In the end there's only one person to ask: Alice herself.

Borrow The Truth About Alice →

Lord of the Flies, by William Golding

A plane crashes on a desert island and the only survivors, a group of schoolboys, assemble on the beach and wait to be rescued. By day they inhabit a land of bright fantastic birds and dark blue seas, but at night their dreams are haunted by the image of a terrifying beast.

Borrow Lord of the Flies →

The Knife That Killed Me, by Anthony McGowan

He's coming to kill me. Now would be a good time to run. I can't run. I'm too afraid to run.

Paul Varderman could be at any normal school - bullies, girls & teachers are just a part of life. Unfortunately 'normal' doesn't apply when it comes to the school's most evil bully, Roth, a twisted and threatening thug.

Borrow The Knife That Killed Me →

We're all wonders, by R.J. Palacio

The funny, sweet and incredibly moving story of Auggie Pullman. Born with a terrible facial abnormality, this shy, bright ten-year-old has been home-schooled by his parents for his whole life, in an attempt to protect him from the stares and cruelty of the outside world. Now, for the first time, Auggie is being sent to a real school — and he's dreading it. The thing is, Auggie's just an ordinary kid, with an extraordinary face. But can he convince his new classmates that he's just like them, underneath it all? Wonder is a book you'll read in one sitting, pass on to others, and remember long after the final page.

Lis London is hoping for a fresh start when she arrives in the sleepy village of Hollow Pike — but nothing here is as it seems. Lis has a recurring nightmare where someone is trying to kill her. Exploring themes of bullying, and obsession this thriller is a real page-turner.