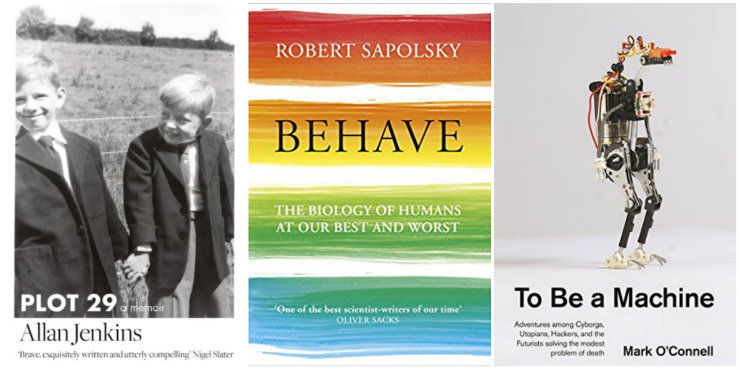 "Yejide is hoping for a miracle, for a child. It is all her husband wants, all her mother-in-law wants, and she has tried everything - arduous pilgrimages, medical consultations, dances with prophets, appeals to God. But when her in-laws insist upon a new wife, it is too much for Yejide to bear. It will lead to jealousy, betrayal, and despair."

"Historian Lindsey Fitzharris recreates a critical turning point in the history of medicine, when Joseph Lister transformed surgery from a brutal, harrowing practice to the safe, vaunted profession we know today. Victorian operating theatres were known as 'gateways of death', Fitzharris reminds us, since half of those who underwent surgery didn't survive the experience. This was an era when a broken leg could lead to amputation, when surgeons often lacked university degrees, and were still known to ransack cemeteries to find cadavers."

In Pursuit of Memory: The fight against Alzheimer's, by Joseph Jebelli

"When Joseph Jebelli was 12, his beloved grandfather began to act very strangely. It started with inexplicable walks, and gradually his bright smiles were replaced by a fearful, withdrawn expression. Before long, he didn't recognise his family any more.

"Dr Jebelli has dedicated his career to understanding Alzheimer's disease, which affects millions worldwide and 850,000 people in the UK alone. In this, his first book, Jebelli explores the past, present and future of Alzheimer's disease starting from the very beginning - the first recorded case more than one hundred years ago - right up to the cutting-edge research being done today."

Plot 29: A memoir, by Allan Jenkins

"Plot 29 is on a London allotment site where people come together to grow. It's just that sometimes what Allan Jenkins grows there, along with marigolds and sorrel, is solace."

The White Book, by Han Kang, translated by Deborah Smith

"While on a writer's residency in Warsaw, a city palpably scarred by the violence of the past, the narrator finds herself haunted by the story of her older sister, who died a mere two hours after birth. A fragmented exploration of white things - the swaddling bands that were also her shroud, the breast milk she did not live to drink, the blank page on which the narrator herself attempts to reconstruct the story - unfold in a powerfully poetic distillation. As she walks the unfamiliar, snow-streaked streets, lined by buildings formerly obliterated in the Second World War, their identities blur and overlap as the narrator wonders, 'Can I give this life to you?'"

With the End in Mind: Dying, death and wisdom in an age of denial, by Kathryn Mannix

"What colour is cancer? Why do some people appear to have made miraculous recoveries? How can you tell when someone is in the final hours of their life? How can we ensure our most vulnerable are treated with the dignity they deserve?"

"A retired couple, Gerry and Stella Gilmore, fly from their home in Scotland to Amsterdam for a long weekend. A holiday to refresh the senses, to do some sightseeing and generally to take stock of what remains of their lives.

"Their relationship seems safe, easy, familiar - but over the course of the four days we discover the deep uncertainties which exist between them. Gerry, once an architect, is forgetful and set in his ways. Stella is tired of his lifestyle, worried about their marriage and angry at his constant undermining of her religious faith. Things are not helped by memories which have begun to resurface of a troubled time in their native Ireland. As their midwinter break comes to an end, we understand how far apart they are - and can only watch as they struggle to save themselves."

To Be a Machine: Adventures among cyborgs, utopians, hackers, and the futurists solving the modest problem of death, by Mark O'Connell

"Mark O'Connell presents us with an exploration of transhumanism: its philosophical and scientific roots, its key players and possible futures, from charismatic techies seeking to enhance the body to immortalists who believe in the possibility of 'solving' death; from computer programmers quietly re-designing the world to vast competitive robotics conventions."

I Am, I Am, I Am: Seventeen brushers with death, by Maggie O'Farrell

"I Am, I Am, I Am is Sunday Times bestseller and Costa Novel Award winner Maggie O'Farrell's electric and shocking memoir of the near death experiences that have punctuated her life. A childhood illness she was not expected to survive. A teenage yearning to escape that nearly ended in disaster. A terrifying encounter on a remote path. A mismanaged labour in an understaffed hospital.

"This is a memoir with a difference: seventeen encounters with Maggie at different ages, in different locations, reveal to us a whole life in a series of tense, visceral snapshots. It is a book to make you question yourself: what would you do if your life was in danger? How would you react? And what would you stand to lose?"

Mayhem: A memoir, by Sigrid Rausing

"In the summer of 2012 a woman named Eva was found dead in the London townhouse she shared with her husband, Hans K. Rausing. The couple had struggled with addiction for years, often under the glare of tabloid headlines.

"Now, writing with singular clarity and restraint, Hans's sister, the editor and publisher Sigrid Rausing, tries to make sense of what happened."

Behave: The biology of humans at our best and worst, by Robert Sapolski

"Behave achieves what no other text has previously attempted: it brings together a whole host of sciences - the study of our brains, genes and hormones, the investigations of psychology, anthropology and evolutionary history - and by gathering them together offers the richest and most accurate understanding yet of the causes of human behaviour. It shows that any explanation of why we behave the way we do is incomplete until we consider all of these factors together; when combined, the insights that emerge are unprecedented and astonishing."

"Until the late 1960s, tens of thousands of children suffered crippling birth defects if their mothers had been exposed to rubella, popularly known as German measles, while pregnant; there was no vaccine and little understanding of how the disease devastated fetuses.

"In June 1962, a young biologist in Philadelphia, USA, using tissue extracted from an aborted foetus from Sweden, produced safe, clean cells that allowed the creation of vaccines against rubella and other common childhood diseases. Two years later, in the midst of a devastating German measles epidemic, his colleague developed the vaccine that would one day wipe out homegrown rubella."