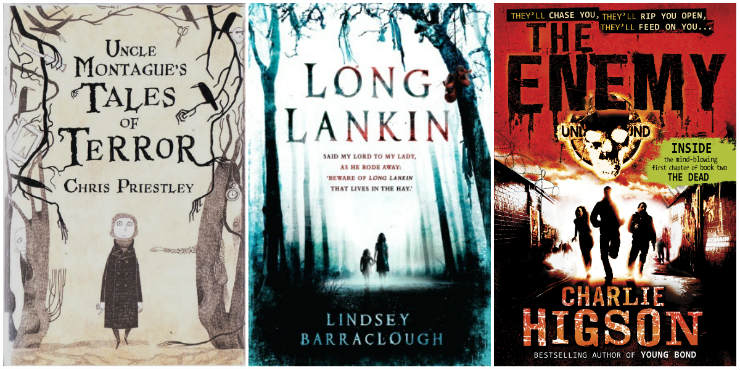 "Uncle Montague lives alone in a big house and his regular visits from his nephew give him the opportunity to relive some of the most frightening stories he knows. But as the stories unfold, a newer and more surprising narrative emerges, one that is perhaps the most frightening of all."

The Screaming Staircase, by Jonathan Stroud

The first in an outstanding supernatural adventure series about ghost-hunting agency Lockwood & Co:

"Anthony Lockwood, with his slightly grumpy deputy George and his junior field operative Lucy, make up a small, shabby yet talented ghost-hunting agency. After a series of calamitous investigations into the supernatural go awry, the team are desperate to prove themselves."

If you want more, the other four books in the series are The Whispering Skull, The Hollow Boy The Creeping Shadow and The Empty Grave.

The Spook's Apprentice, by Joseph Delaney

"Thomas Ward is the seventh son of a seventh son and has been apprenticed to the local spook. The job is hard, the spook is distant and many apprentices have failed before him. Somehow Thomas must learn how to exorcise ghosts, contain witches and bind boggarts."

"Since the car accident that resulted in the death of his girlfriend Eliza, Samuel is devastated and blames himself for the crash. He is drowning in grief and his overwhelming need to reunite with Eliza drives him to the forces of black magic, in a bid to bring her back to life. But he has difficult choices to make and the terrifying consequences of dark magic are about to raise their head."

"When Cora and her sister are sent to stay with their elderly aunt in the isolated village of Bryers Guerdon, they receive a less than warm welcome. Auntie Ida's life was devastated the last time two young girls were at Guerdon Hall, and now her nieces' arrival has reawoken an evil that has lain waiting for years."

The truly horrifying first book of ten in the Demonata series:

"When Grubbs Grady first encounters Lord Loss and his evil minions, he learns three things: the world is vicious, magic is possible, demons are real. He thinks that he will never again witness such a terrible night of death and darkness. He is wrong."

The Enemy, by Charlie Higson

"When the sickness came, every parent, policeman, politician, every adult, fell ill. The lucky ones died. The others are crazed, confused and hungry. Only children under 14 remain, and they're fighting to survive. Now there are rumours of a safe place to hide. And so a gang of children begin their quest across London."

More than just a gruesome horror escapade, the series started by The Enemy looks at social structures, governance and communities, as well as the usual friendship, loyalty and zombie apocalypse survival strategies.