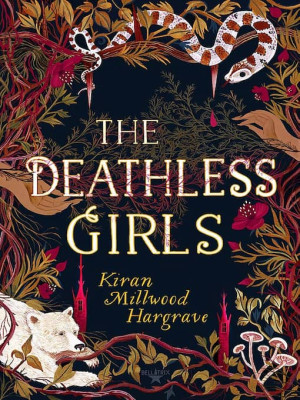 Celebrate International Women's Day with these feminist retellings and reimaginings of well-known stories for young adults.

Exiled to a far-flung island by the whims of the gods, Medusa has little company except the snakes that adorn her head instead of hair. But when a charmed, beautiful boy called Perseus arrives on the island, her lonely existence is disrupted with the force of a supernova, unleashing desire, love and betrayal.

The surface breaks, by Louise O'Neill

Deep beneath the sea off the cold Irish coast, Gaia is a young mermaid who dreams of being human - but at what terrible price? Hans Christian Andersen's dark original fairy tale is reimagined through a feminist lens, with the writing and world building that has won Louise her legions of devoted fans.

Gothic, intoxicating, feminist, and romantic - this is the breathtakingly imagined untold story of the brides of Dracula. They say the thirst of blood is like a madness - they must sate it. Even with their own kin. On the eve of her divining, the day she'll discover her fate, seventeen-year-old Lil and her twin sister Kizzy are captured and enslaved by the cruel Boyar Valcar, taken far away from their beloved traveller community.

Forced to work in the harsh and unwelcoming castle kitchens, Lil is comforted when she meets Mira, a fellow slave who she feels drawn to in a way she doesn't understand. But she also learns about the Dragon, a mysterious and terrifying figure of myth and legend who takes girls as gifts. They may not have had their divining day, but the girls will still discover their fate.

17-year-old Dinah needs to leave her home, the weird commune where she grew up. She needs a whole new identity, starting with how she looks, starting with shaving off her hair, her 'crowning glory'. She has to do it quickly, because she has to go now. Dinah was going to go alone and hitch a ride down south. Except, she ends up being persuaded to illegally drive a VW campervan for hundreds of miles, accompanied by a grumpy man with one leg.

This wasn't the plan. But while she's driving, Dinah will be forced to confront everything that led her here, everything that will finally show her which direction to turn.

Stepsister takes up where Cinderella's tale ends. We meet Isabelle, the younger of Cinderella's two stepsisters. Ella is considered beautiful; stepsister Isabelle is not. Isabelle is fearless, brave, and strong-willed. She fences better than any boy, and takes her stallion over jumps that grown men fear to attempt. It doesn't matter, though; these qualities are not valued in a girl.

Others have determined what is beautiful, and Isabelle does not fit their definition. Isabelle must face down the demons that drove her cruel treatment of Ella, challenge her own fate and maybe even redefine the very notion of beauty.

Houston, Texas. 1964. Evie Barnes is a 'bad' girl. So are all her friends. They're the sort who wear bold makeup, laugh too loud and run around with boys. Most of all, they protect their own against the world. So when Evie is saved from being assaulted by a good girl from the right side of the tracks, every rule she's always lived by is called into question. Now she must rethink everything she knew about loyalty and learn that when girls stick together it doesn't matter whether they're 'good' or 'bad'. In this riveting story of murder, secrets, and tragedy, Jennifer Mathieu reimagines S.E. Hinton's 'The Outsiders' from a female perspective.