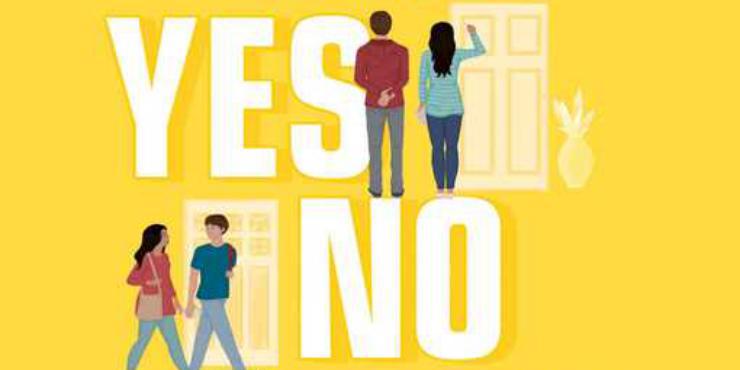 See Yes no maybe so on our Overdrive platform

"Jamie Goldberg is cool with volunteering for his local state candidate - as long as he's behind the scenes. There's no way he'd ever knock on doors to ask people for their votes...until he meets Maya.

Maya Rehman's having the worst Ramadan ever. Her best friend is too busy to hang out, her summer trip is cancelled, her parents are separating and now her mother thinks the solution to her problems is political canvassing - with some awkward guy she hardly knows...

Going door to door isn't exactly glamorous, but maybe it's not the worst thing in the world. After all, the polls are getting closer - and so are Maya and Jamie. Mastering local activism is one thing. Navigating the cross-cultural crush of the century is another thing entirely."

Yes No Maybe So is like a hug in a book. It’s a beautiful story about love, friendship, hope and the importance of fighting for what you believe in.

Maya and Jamie are childhood friends who haven’t seen each other for years but happen to meet again thanks to a local political campaign endorsed by their parents. Being forced to canvas together isn’t their first choice of how to spend summer but as their friendship grows so does the importance of the campaign tackling racial discrimination and prejudice.

The tougher issues within the book are so important but handled with such care, allowing it to be accessible to a wider audience. It highlights the divisions not just in politics but in the wider world too. It is also a beautifully diverse book allowing everyone to be represented which is so important in the 21st century.

The characters are wonderfully crafted and I particularly enjoyed the dual narration of Maya and Jamie whose personalities really jump out of their respective chapters.

This book is such a welcomed escape from our current climate and I challenge you to not put this book down - as I know I couldn’t!