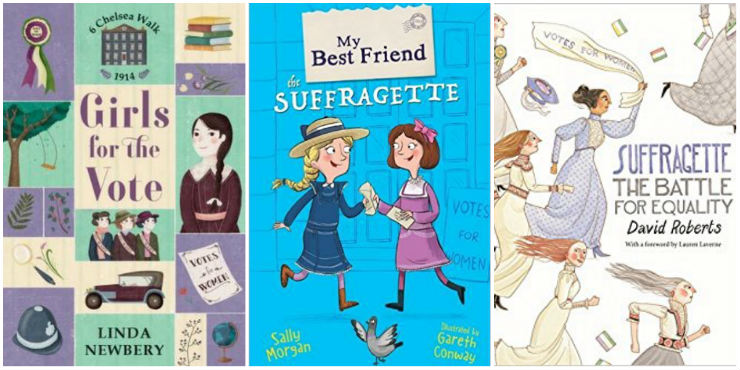 2018 marks 100 years since some women were given the vote. Mark the occasion with these great children's books about suffragettes and suffragists.

Looking for suffrage books for young adults? Our reviewers Emily and Amélie loved The Making of Mollie by Anna Carey and Things a Bright Girl Can Do by Sally Nicholls.

The Princess and the Suffragette, by Holly Webb

"It is 1913, nine years after the end of A Little Princess saw Sara Crewe escape Miss Minchin's orphanage. Lottie, the smallest girl from the original story, learns about the Suffragette movement from Sara, who returns to visit from time to time. Soon Lottie finds herself sneaking out of the orphanage to attend a demonstration, in defiance of her cold, distant father. A father who has a secret to hide about her own missing mother..."

My Best Friend the Suffragette, by Sally Morgan & Gareth Conway

"Through their letters, the girls make sense of the mayhem around them, from suffragettes smashing windows, to the arrest of Emmeline Pankhurst, the introduction of the Cat and Mouse Act to the fateful Epsom Derby. As the events of the year unfold Christine's opinions begins to change. But when Christine's cousin Jane sneaks out of the house one night and burns down the booth in Regents Park, the girls realise the real cost of being a suffragette."

Girls for the Vote, by Linda Newberry

"When 13-year-old Polly befriends two suffragettes in the top floor flat at 6 Chelsea Walk, she finds herself questioning the views of those around her. The 'Votes for Women' campaign strikes a chord with Polly and she becomes determined to join the suffragettes' protest march, even if it means clashing with her family."

Emmeline and the Plucky Pup, by Megan Rix

"Meet the leader of the suffragettes, Emmeline Pankhurst, and a particularly plucky pup, during a momentous time in history!

"Alfie can't believe his luck when he is allowed to keep a tiny puppy he finds abandoned on the street. Rascal is cute as a button and has lots of attitude, and Emmeline Pankhurst is thrilled that her ward Alfie has a new friend. Alfie and Rascal deliver messages between the suffragettes as they organise their 'Votes for Women' campaign. But it's sometimes dangerous work, and it's not long before Alfie and Rascal find out the true cost of the fight."

"Opal Plumstead might be plain, but she has always been fiercely intelligent. Yet her scholarship and dreams of university are snatched away when her father is sent to prison, and 14-year-old Opal must start work at the Fairy Glen sweet factory to support her family.

"Opal struggles to get along with the other workers, who think her snobby and stuck-up. But she idolises Mrs Roberts, the factory's beautiful, dignified owner, who introduces her to the legendary Mrs Pankhurst and her fellow suffragettes. And when Opal meets Morgan - Mrs Roberts' handsome son, and the heir to Fairy Glen - she believes she has found her soulmate. But the First World War is about to begin, and will change Opal's life for ever."

What is Feminism? Why do we need it? & other big questions, by Louise Spilsbury & Bea Appleby

"What is feminism? Why do we need it? Where does it come from? Why does it exist?

"The word 'feminism' is bandied about a lot in the media, often with little or no explanation as to what it means. This book presents an introduction for children to the movement, looking at the history of feminism, what it is today and its enormous relevance to young people."

"In Heroic Leaders and Activists you will meet the early feminists who first stood up for women's rights around the world, including Mary Wollstonecraft and Qiu Jin. Read about the astonishing Helen Keller, who despite being born deaf and blind, became a political activist and writer. Discover the women who have used their art to promote social justice, such as poet Maya Angelou. These inspiring activists for peace, human rights and the environment have all, in their own ways, made their mark on history."

"This biography tells the story of Emmeline Pankhurst, from her early campaigns for the rights of women to vote, through the formation of the Women's Social and Political Union, to the triumph following the First World War of the granting of rights for women."

"As a child, Emmeline Pankhurst was shocked at the inequality of men and women that she saw all around her. When she grew up, she never stopped fighting for women to get the vote, inspiring other women to demonstrate, go on hunger strike and protest for the cause. This inspiring and informative little biography comes with extra facts about Emmeline's life at the back."

Suffragette: the battle for equality, by David Roberts

"The year 2018 marks a century since the first women won the vote in the United Kingdom, and this book tells the story of their fight. This is a tale of astounding bravery, ingenuity and strength. David's conversational style is accessible and his artwork full of rich detail, bringing to life the many vivid characters of the Suffragette movement - from the militant activist and wheelchair user Rosa May Billinghurst to the world-famous Emmeline Pankhurst."