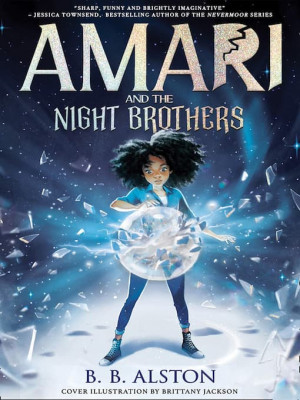 Waterstones have announced their shortlists for the Waterstones Children's Book Prize 2022.

Take a look at their choices of the best illustrated books for children, middle-grade titles and books for older readers.

Grandad's camper van is hidden away in the garage - now Gramps isn't around any more, the adventures they shared travelling in it just wouldn't be the same. As she listens to his wonderful stories, Grandad's granddaughter has an idea to cheer him up.

The viking who liked icing, by Lu Fraser

Nut isn't like the other Vikings; he doesn't climb hills or swim icy lakes. But he does have one great passion - Nut loves to bake cakes! So when Viking Sports' Day comes round Nut isn't excited at all - you can't put sprinkles on a shot put. What will he do instead?!

Borrow The viking who liked icing →

Wolfboy is hungry! He's drooly and growly and fussy! As he stomps through the forest looking for rabbits, he grows hungrier and growlier by the minute! What will happen if Wolfboy can't find those rabbits? And what will happen if he does?

There once was a boy called Billy McGill who lived by himself at the top of a hill. He spent every day in his house all alone for Billy McGill liked to be on his own. But life doesn't always turn out how you plan it.

The duck who didn't like water, by Steve Small

Duck is not like other ducks. Duck doesn't like water and is perfectly fine alone, thank you very much. But then, one dark and stormy night, an outgoing, water-loving, and very lost Frog turns up at Duck's door. Can this odd couple find Frog's home? And will they find friendship along the way?

Out to sea, by Helen Kellock

'Out To Sea' follows the journey of a young girl named Lara who is so sad after the death of her grandmother that she is carried out to sea on a flood of her own tears. When it seems like sadness has overwhelmed her entirely, she discovers a pearl at the bottom of the ocean that triggers memories of the many happy times Lara shared with her grandmother. With the pearl safely at her side, Lara realises that she is not alone and finds the strength to pick up her oars and row herself back home.

Borrow Out to sea →

Children of the quicksands, by Efua Traore

In a remote Nigerian village, twelve-year-old Simi is desperate to uncover a family secret. But it's when she's caught in the red quicksand of a forbidden lake that her adventure truly begins. Can she bring her family back together and restore peace to the village?

Borrow Children of the quicksands →

Amari and the night brothers, by B.B. Alston

Amari Peters knows three things. Her big brother Quinton has gone missing. No one will talk about it. His mysterious job holds the secret. So when Amari gets an invitation to the Bureau of Supernatural Affairs, she's certain this is her chance to find Quinton. But first she has to get her head around the new world of the Bureau, where mermaids, aliens and magicians are real, and her roommate is a weredragon. With an evil magician threatening the whole supernatural world, and her own classmates thinking she is the enemy, Amari has never felt more alone.

Borrow Amari and the night brothers →

The last bear, by Hannah Gold

There are no polar bears left on Bear Island. At least, that's what April's father tells her when his scientific research takes them to this remote Arctic outpost for six months. But one endless summer night, April meets one. He is starving, lonely and a long way from home. Determined to save him, April begins the most important journey of her life. This moving story will win the hearts of children the world over and show them that no one is too young or insignificant to make a difference.

Bumble & Snug and the angry pirates, by Mark Bradley

Bumble and Snug are going to have a picnic! But when they accidentally get lost, they're both cross - is their adventure ruined? Working together to find their way home, Bumble and Snug come across a pirate treasure horde. But taking treasure that isn't yours is a good way to get into trouble, and sure enough some very angry pirates aren't far behind. Bumble and Snug are certain they can replace the treasure, and fix things to make everybody happy. But there's another monstrous obstacle in store - and this one has tentacles!

Mia Tang has a lot of secrets. She lives in a motel. Every day, while where parents clean the rooms, Mia manages the front desk of the Calivista Motel and tends to its guests. Her parents hide immigrants. And if the mean motel owner, Mr Yao, finds out they've been letting them stay in the empty rooms for free, the Tang's will be doomed. It will take all of Mia's courage, kindness and hard work to get through this year. Will she be able to hold onto her job and go for her dreams?

Me, my dad and the end of the rainbow, by Benjamin Dean

Things aren't going great for Archie Albright. His dad's acting weird, his mum too, and he all he wants is for everything to go back to normal, to three months before when his parents were happy and still lived together. When Archie sees a colourful, crumpled flyer fall out of Dad's pocket, he thinks he may have found the answer. Only problem? The answer might just lie at the end of the rainbow, an adventure away. Together with his best friends, Bell and Seb, Archie sets off on a heartwarming and unforgettable journey to try and fix his family, even if he has to break a few rules to do it.

Borrow Me, my dad and the end of the rainbow →

Not my problem, by Ciara Smyth

When Aideen agrees to help ambitious class swot Maebh Kowalski deal with her crazy workload, she doesn't expect to end up reluctantly pushing Maebh down the stairs. With this, Aideen becomes the school 'fixer': any problem a student has, Aideen will sort it out, from stealing confiscated mobiles to breaking into parties. All she asks for is a favour in return. But Aideen's own life is a mess - her mam's drinking again, her BFF Holly is avoiding her and she's skipping school. Spending more time with the uptight (but annoyingly cute) Maebh and chatterbox Kavi, Aideen starts to wonder: can every problem be solved?

Borrow Not my problem →

The crossing, by Manjeet Mann

Natalie's world has turned upside down. She's lost her mum and her brother is descending further and further into anger and violence with a far-right gang who march the streets of Dover. Sammy has fled his home and family in Eritrea for the chance of a new life in Europe. Every step he takes is a step into the unknown - into a strange country and a hidden future. A twist of fate brings these two teens from opposite sides of the channel together, but will their journey end in hope or despair?

The upper world, by Femi Fadugba

The story of two teenagers, a generation apart, connected across time by one bullet about to devastate both of their lives. 2020: Close to getting expelled and caught up in a deadly feud, the tensions surrounding Esso seem to be leading to a single moment that could shatter his future. 2035: Stripped of everything, football prodigy Rhia has just one thing left on her mind - figuring out how to avert a bullet that was fired 15 years in the past. Everything changes when Esso gains access to a mysterious world where he can see glimpses of the past and future, and when Rhia starts understanding the physics of it. The two must work together to master the secrets of the Upper World and seize control of their own destinies before it's too late.

18-year-old Daunis's mixed heritage has always made her feel like an outsider, both in her hometown and on the nearby Ojibwe reservation. When she witnesses a shocking murder, she reluctantly agrees to be part of a covert FBI operation into a series of drug-related deaths. But the deceptions - and deaths - keep piling up and soon the threat strikes too close to home. Now Daunis must decide what it means to be a strong Anishinaabe kwe (Ojibwe woman) and how far she'll go to protect her community, even if it tears apart the only world she's ever known.

The gilded ones, by Namina Forna

Sixteen-year-old Deka lives in fear and anticipation of the blood ceremony that will determine whether she will become a member of her village. Already different from everyone else because of her unnatural intuition, Deka prays for red blood so she can finally feel like she belongs. But on the day of the ceremony, her blood runs gold, the color of impurity - and Deka knows she will face a consequence worse than death. Then a mysterious woman comes to her with a choice: stay in the village and submit to her fate, or leave to fight for the emperor in an army of girls just like her. They are called alaki - near-immortals with rare gifts. And they are the only ones who can stop the empire's greatest threat.

Borrow The gilded ones →

Not here to be liked, by Michelle Quach

Falling in love wasn't part of the plan. Eliza Quan fully expects to be voted the next editor-in-chief of her school paper. She works hard, she respects the facts, and she has the most experience. Len DiMartile is an injured star baseball player who seems to have joined the paper just to have something to do. Naturally, the staff picks Len to be their next leader. Because while they may respect Eliza, they don't particularly like her - but right now, Eliza is not here to be liked. She's here to win. But someone does like Eliza. A lot. Shame it's the boy standing in the way of her becoming editor-in-chief.

Borrow Not here to be liked →

Looking for something new to read, listen to or watch? Take a look at our recommendations.