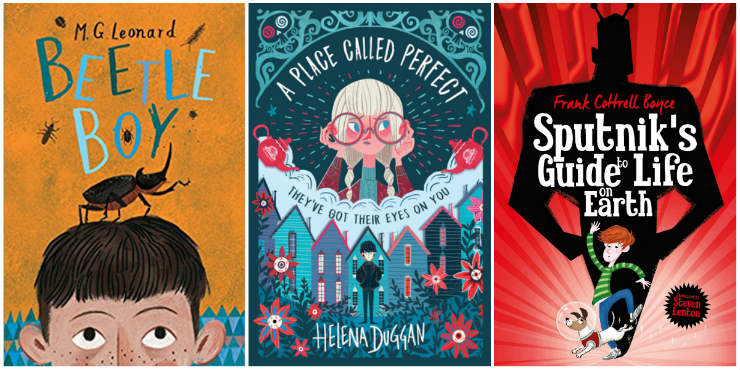 WHSmith have launched the Tom Fletcher Book Club to get children excited about reading with brilliant books. Why not reserve or pick up one of their highly-recommended titles?

"When Murph Cooper rocks up to his new school several weeks into the beginning of term, he can't help but feel a bit out of his depth. And it's not because he's worried about where to sit, and making friends, and fitting in, or not knowing where the loos are. It's because his mum has enrolled him at a school for superheroes by mistake. And unlike his fellow students, who can all control the weather or fly or conjure tiny horses from thin air, Murph has no special abilities whatsoever.

"But just because you don't have superpowers, it doesn't mean you can't save the day. Let's hope Murph realises that, and quick - because not far away is a great big bad guy who is half man and half wasp, and his mind is abuzz with evil plans."

"When Fran the Fabulous Fairy turns up in Tiga Whicabim's shed to tell her she's a witch, Tiga doesn't believe her. Or at least not until Fran points out that TIGA WHICABIM is actually an anagram of I AM A BIG WITCH and magics her away down the drainpipes to compete in Witch Wars - the competition to crown the next Top Witch of Ritzy City."

My Brother is a Superhero, by David Solomons

"My brother is a superhero, and I could have been one too, except that I needed to go for a wee.

"My name is Luke Parker, I'm 11 years old and I live in a mild-mannered part of London with my mum, dad and big brother, Zack. He wasn't always a superhero, but with a name like Zack you've got to wonder if my parents had a hunch that one day he'd end up wearing a mask and cape and saving orphans from buring buildings. I mean, come on! It's what you get in a comic when a superhero punches a supervillain. Pow! Blam! Zack!"

I Am Not a Loser, by Jim Smith

"This is the first of three notebooks belonging to Barry Loser. Follow Barry as he tries to throw off his loserness, take revenge on the terrible Fronkle-burping Darren Darrenofski and finally become a winner."

"George and Harold (the co-stars of the popular Captain Underpants series) are in big trouble again! Their mean principal, Mr Krupp, has had it with their comic books. But the boys aren't giving up, and they decide to create an all-new epic novel about a subject they've never tackled before!"

You're a Bad Man, Mr Gum, by Andy Stanton

"Mr Gum is a truly nasty old man. He's absolutely grim. But this book's not just about him. There's also a little girl called Polly, an evil butcher, heroes and sweets and stuff, and Jake the dog, who must be saved from terrible, terrible evil."

"Darkus's dad has disappeared, but his new friend, a giant beetle called Baxter, is some consolation. Together, boy and beetle set out to solve the mystery of his father's disappearance. But Lucretia Cutter, a fashion designer with a penchant for beetle jewellery, is dead set against their success."

"Violet hates living in Perfect. Why does everyone have to wear special glasses to stop them going blind? What are the strange noises in the night and why is Mum acting so weird? Then Dad disappears and Violet is determined to uncover the truth with the help of the mysterious Boy. But returning normality to Perfect is a battle they never imagined."

"Introducing the feisty Clarice Bean to a whole new and older audience, this volume concerns Clarice and her friend Betty Moody and their overwhelming desire to have adventures whilst becoming ace detectives."

"The Blythes are a big, warm, rambunctious family who live on a small farm and sometimes foster children. Now Prez has come to live with them. But, though he seems cheerful and helpful, he never says a word. Then one day Prez answers the door to someone claiming to be his relative. This small, loud stranger carries a backpack, walks with a swagger and goes by the name of Sputnik.

"As Prez dithers on the doorstep, Sputnik strolls right past him and introduces himself to everyone in the household. Prez is amazed at the response. The family pat Sputnik on the head, call him a good boy and drop food into his mouth. It seems they all think Sputnik is a dog. It's only Prez who thinks otherwise. But Prez soon finds himself having to defend the family from the chaos and danger unleashed by Sputnik, as household items come to life."