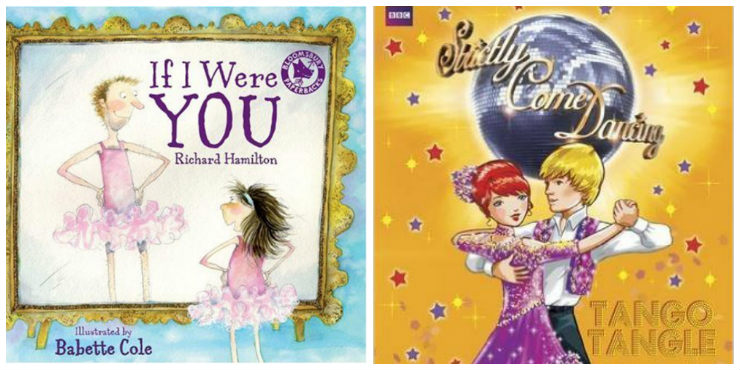 "Did you know that bunnies love to dance? Did you know they love to sing and play the flute? There's a lot they get up to when nobody's watching! But while they're having fun, they don't notice that someone is creeping nearer. Does he mean trouble? Or does he just want to play?"

Fabi Santiago - Tiger in a Tutu

"Set in Paris, with a dancing tiger as the star, this is an uplifting tale of following your dreams and pursuing your talent, no matter what, and about making friends. Max isn't like other tigers - he is a tiger with a dream! He longs to pirouette and plié, to leap and spin. He wants to be a dazzling dancer, shining on the stage! Little dancers will love to see Max triumph and get his moment in the spotlight."

"Gerald would love to join in with the other animals at the Jungle Dance but everyone knows that giraffes can't dance - or can they?"

"Grace loves to act out stories. When her school decides to perform Peter Pan, Grace longs to play the lead, but her classmates point out that Peter was a boy, and besides, he wasn't black."

"Biff is not like ordinary dogs. He doesn't do dog stuff like peeing on lampposts, scratching his fleas or drinking out of toilets. Biff likes music & moonlight & walking on his tiptoes. You see, Biff doesn't think he's a dog, Biff thinks he's a ballerina, which is all very well - but dogs don't do ballet - do they?"

"Sir Dancealot is the bravest knight around, but he has a rather unique way of beating his foe - with a dance-off! Because all across the land Sir Dancealot is known for his move-busting, body-popping, hip-hopping duelling. But he also has a weakness, and he is about to meet his match in the form of a disco-dancing, pirouetting, ICE-SKATING dragon!"

"Angelina wants more than anything else to become a ballerina and dances all the time - even when she's supposed to be doing chores or getting ready for school. Her parents, Mr and Mrs Mouseling, are in despair - but then they think of a plan. They decide it's time for Angelina to go to ballet school! She works hard for years and years until she becomes the famous ballerina, Mademoiselle Angelina!"

Richard Hamilton & Babette Cole - If I Were You

"When Dad puts Daisy to bed, he suggests 'If I were you - I'd go to sleep.' So cheeky Daisy starts thinking about what things would really be like if she and Dad swapped around."

Margaret Mahy & Polly Dunbar - The Man from the Land of Fandango

"The man from the land of Fandango is coming to pay you a call! He wears a hat with a tassel and a polka-dot tie - and he juggles and bounces and dances with bears, bison, baboons, kangaroos and even dinosaurs. He's wonderful and amazing - so watch out for him, and watch carefully - because he only appears every 500 years."

"Cassidy can't wait to enrol at Dance and Drama Academy summer school! She's always dreamed of discovering her hidden talent - could she be a star in the making? But with auditions looming, Cassidy is gripped by stage fright. As big brother, Liam, keeps reminding her, she does have a knack for embarrassing herself. What if Cassidy's stage debut turns out to be an all-singing, all-dancing disaster?"

Bella loves to dance, so when an invitation arrives to audition for 'Strictly Dance Academy' she can't wait to try out. But there are so many other talented girls with the same dream. Can Bella dazzle the judges and beat the competition to take her place under the glitterball spotlight?

"Skye Green's mum is driving her insane! When she's not posting embarrassing pictures of Skye online or experimenting with bizarre clothing, she's forever taking up new hobbies - and her latest obsession is ballroom dancing! It's only a matter of time until she waltzes down the street in spandex and sequins - and to make matters worse, Skye's younger brother is wildly (and irritatingly) enthusiastic about Mum's new hobby, and about wearing Mum's sparkly new outfits!

"As if this wasn't horrific enough, Skye's mum has also enlisted the new neighbour's son to come and 'babysit' when she's at dance class, and he's only a year older than Skye! Talk about mortifying in the extreme! At least Skye's best friend, Aubrey is there to help Skye cope with her family's madness. They've been friends since before they can remember, and nothing will ever change that - right?"