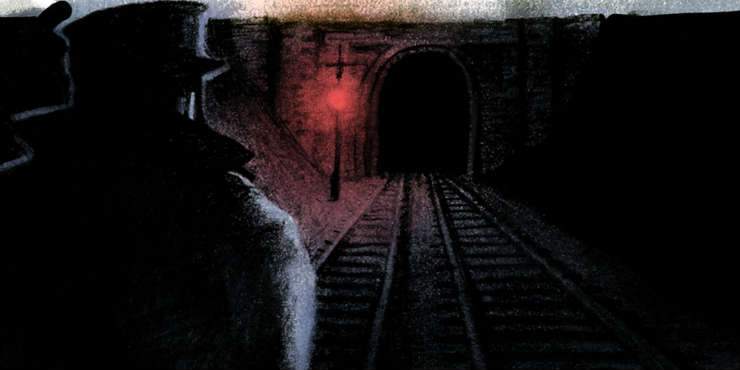 Admission number one – I haven’t read that much by Charles Dickens recently. As a child we had a collection (in faux leather!) on the family bookshelves and I dipped into Great Expectations and A Christmas Carol but then I moved on. I found them a bit stuffy and long-winded to be honest.

Then a few weeks ago I heard Chris Priestley talk about a Dickens short story called The Signalman — a story that had had a great influence on him as a child. I tucked this title away as yet another book I must locate and read.

Then, as luck would have it, I found a copy whilst browsing in the Ipswich branch of Waterstones this week. Coincidence – I think not! Whilst paying for this £1.99 pocket edition the lovely man serving me commented that he also would be buying a copy to stick in his pocket to read on the train. The power of this book was spreading!

Last night, after lighting the wood-burner, I sat down and cracked this bad boy open. And wow, just wow. What a chilling short tale it was.

Visited by an unnamed narrator, the signalman spends his days stuck in a dark, dank railway cutting that rarely sees light. His work is to signal to trains when it is safe to travel along the tracks. A pretty miserable, tedious but very important occupation. He spellbinds our narrator with a dark tale of visitations from a ghoulish creature. And with each spooky, spectral sighting comes calamity and death…

The short story thrilled and chilled Victorian readers in their millions. It also frightened a new generation the 1970s when it was adapted for the BBC as part of their A Ghost Story for Christmas series.

As luck would have it, you can watch the episode on YouTube, but I recommend that you first gather around a fire and read this short tale for yourself. The terrifying images Dickens can create in your mind with his word wizardry will be far more chilling…