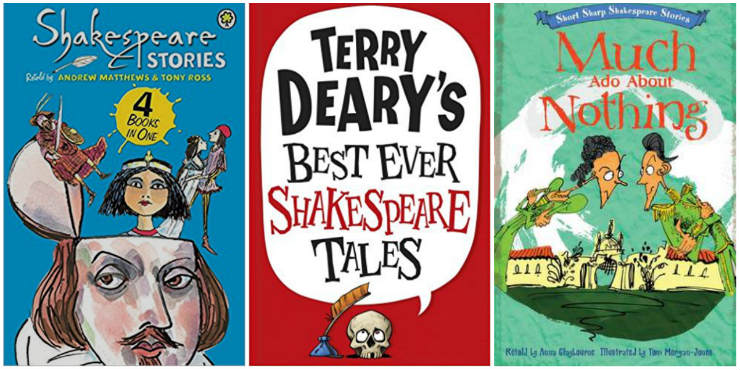 Shakespeare Week runs from 12 - 18 March. These new versions of classic Shakespeare texts show you're never too young to meet the Bard.

Twelve and nine tellings, respectively, of Shakespeare's most memorable dramas in narrative form.

Tales of Shakespeare, by Marcia Williams

"Much-loved author/illustrator Marcia Williams retells fourteen of Shakespeare's most famous plays, with full-colour illustrations throughout. From the heartbreaking tragedy of Romeo and Juliet to Puck's hilarious escapades in A Midsummer Night's Dream, Marcia brings Shakespeare's stories vividly to life. A witty, accessible introduction to Shakespeare's plays."

"This series offers an excellent introduction to Shakespeare for younger readers. The tales have been retold using accessible language and each of the plays is vividly brought to life for a whole new audience."

These retellings are also available individually.

"Terry Deary tells you more than what happens in everyone's favourite Shakespeare plays - he tells you the stories behind them too. Find out how the plays were originally staged and what Shakespeare himself might have thought of his work being taught in schools."

The classic re-telling of 20 of the tales first published in 1807. This edition has pen-and-ink illustrations by Arthur Rackham.

To Wee or Not To Wee!, by Pamela Butchart & Thomas Flintham

"When Izzy (star of the Baby Aliens series) is asked to tell her friends some exciting stories, she thinks of Macbeth – there are battles, loads of gore, excellent witches and even walking trees!

"Soon her friends want more, so she moves on to A Midsummer Night’s Dream (a man with a donkey’s head called Bottom!), Romeo and Juliet (kissing – eew!) and Hamlet (who left that skull lying about?) and now everyone wants to know more about the Bard!"

"Step on to a stage full of stories with this beautiful anthology of 12 stories from Shakespeare, rewritten to be accessible to children aged 7+. Including favourites such as The Tempest, A Midsummer Night's Dream, Romeo and Juliet, Hamlet and Othello, each story is stunningly illustrated by collage artist Alice Lindstrom."

"The titles in the 'Tales From Shakespeare' series retell some of Shakespeare's most popular and well-known plays. Clear and contemporary language makes these stories easily accessible to young readers."

"The age-appropriate text in 'Short, Sharp Shakespeare Stories' introduces readers to the play by re-telling the story in modern English. It's an ideal introduction to Shakespeare for children of 9 and above."