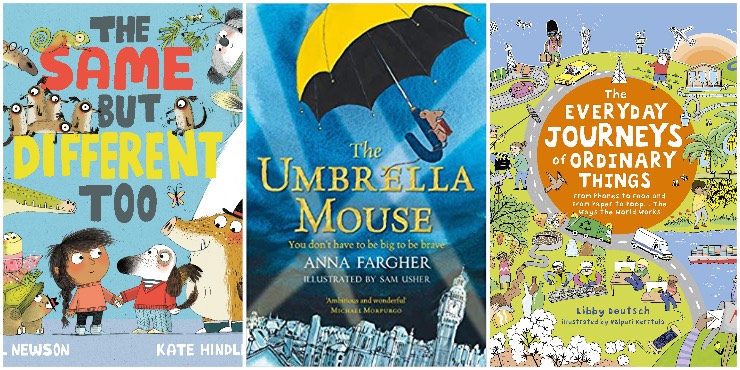 The Sainsbury's Book Awards encourage families to share a story with the best board, picture, fiction and non-fiction books of the year. The winners will be announced on Wednesday 28 August along with the Sainsbury's Children Classic award, which was won last year by The Tiger Who Came to Tea, by Judith Kerr.

"According to Frog, cats sit on gnats, dogs sit on logs, raccoons sit on macaroons, armadillos sit on pillows and chicks sit on bricks. But with this great mix and match book you can make up your own variations!"

Curious toddlers are invited to explore the Moon with this engaging title from the Little World series.

"Look out! Nibbles the book monster has munched his way into this book of numbers! Count along with him as he chomps his way from one to ten. But wherever will he go next?!"

"When a little girl finds a lost star, she takes it home and cares for it, just like a beloved pet. She reads it stories, makes it special snacks and tucks it into bed at night. The more she cares for the star, the brighter it glows. Until, one day, it's time to let go."

"Rocket's going to be the greatest astronaut, star-catcher space-traveller that has ever lived! But first, she needs to convince her big brother Jamal to stop looking down at his phone and start looking up at the stars."

The Same But Different Too, by Karl Newson & Kate Hindley

"These children and animals are all very different to each other. Some are big, some are small. Some are gentle, some are rough. Everyone is playful, but who's the best at hiding? But one thing's certain: they all love a good bedtime story! The perfect picture book for little ones who are just beginning to make sense of their place in the world."

"When toy robot, Boot, wakes up at a scrapyard, it has no idea how it got there and why it isn't with its owner, Beth. It only has two and a half glitchy memories, but it knows it was loved, which means something important to humans.

"Boot soon realises its emotions make it different to other robots, who just function and don't think. Boot is scared but tries to be brave, which is hard when its screen keeps showing a wobbly, worried face."

Little Badman and the Invasion of the Killer Aunties, by Humza Arshad, Henry White & Aleksei Bitskoff

"Humza Khan is the greatest 11-year-old rapper Eggington has ever known: he is Little Badman and he is destined to be rich and famous. But when Humza's music teacher is taken ill his dreams are put on hold. His Auntie has stepped in as substitute, and nobody seems to care about the unorthodox teaching because of the endless sweet treats. As other teachers start to disappear, with more Aunties appearing in their place, Humza knows something isn't right.

"With the help of his elderly Uncle and friends Umer and Wendy, Humza discovers that the suspicious Aunties might not be as friendly as they seem. Now he must find a way to destroy them before they take over the world."

The Umbrella Mouse, by Anna Fargher

"1944, and London is under attack. Young mouse Pip Hanway's safe and quiet world is turned upside down when her home, umbrella shop James Smith & Sons, is destroyed by a bomb. Orphaned and alone, she must begin a perilous quest to find a new home.

"But the only way to get there is by joining Noah’s Ark, a secret gang of animals fighting with the resistance in France, operating beneath the feet of the human soldiers. Danger is everywhere and as the enemy closes in, Pip must risk everything to save her new friends."

You Are Awesome, by Matthew Syed & Toby Triumph

The nomination is for the fill-in journal version of You Are Awesome, which obviously isn't suitable for lending! So here's the book that inspired the journal.

"If you believe you can’t do something, the chances are you won’t try. But what if you really could get better at maths, or sport or exams? In fact, what if you could excel at anything you put your mind to?

"You Are Awesome can help you do just that, inspiring and empowering young readers to find the confidence to realise their potential."

The Awesome Book of Space, by Adam Frost

"Do you know how long it would take you to drive to the sun? Or whether you’d like to go on a space vacation? Be truly amazed by these awesome facts about our planet, our solar system, and our universe!"

"Young children are full of questions about how the world works; the processes and machinations behind the scenes. Why does a light come on when you flick a switch? How can cheese from the supermarket have come out of a cow? What happens when you send a text? Where does your poo go when you flush?(!) All very good questions, and all explained — along with many more — in The Everyday Journey of Ordinary Things.

"With graphic, flowing illustrations and clear, colloquial chunks of text, each process is explained from its early beginnings to a satisfying conclusion. Alongside physical processes, readers are also introduced to the journeys of more abstract concepts such as information and money, as well as ecologically important processes including recycling and the water cycle. Visually arresting, informative and accessible, this is the book for every child who ever wondered, 'How?'"