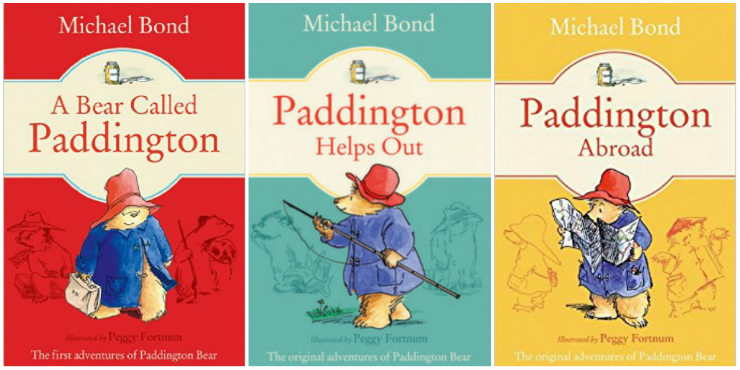 Michael Bond has died at the age of 91. Generations of children have loved his Paddington stories, so why not borrow some books or audiobooks to share with your child?

""A bear on Paddington Station?” said Mrs Brown in amazement. “Don’t be silly – there can’t be."

"The Browns first met Paddington on a railway station – Paddington station, in fact. He had travelled all the way from Darkest Peru with only a jar of marmalade, a suitcase and his hat.

"The Browns soon find that Paddington is a very unusual bear. Ordinary things – like having a bath, travelling underground or going to the seaside become quite extraordinary, if a bear called Paddington is involved."

""Bears like Paddington are very rare,"" says Mrs Bird, "and a good thing too, or it would cost us a small fortune in marmalade."

"The Brown Family first met Paddington on a railway station – Paddington station, in fact – and now he is just another member of their family, if a slightly unusual one.

"As he says himself, "Things happen to me – I’m that sort of bear." With his attempts at home decorating, detective work and photography, the Brown family soon find that Paddington causes his own particular brand of chaos."

""Oh dear," said Paddington, as everyone turned to look at him accusingly. "I’m in trouble again." Somehow trouble comes naturally to Paddington.

"What other bear could upset the whole cinema by standing on his seat to boo the 'bad guy' in the cowboy film? Or drip ice-cream on the people down below? Or flood the launderette and saw Mr Curry's kitchen into little pieces? Only Paddington! But when Paddington’s head is so full of ideas, some things are bound to go wrong!"

"The Browns are going abroad, and Paddington considers a holiday in France is not to be taken lightly, so he packs a disguise outfit, his magic set and a map of France printed on a tea towel.

"Paddington is in charge of the 'EYETINNERY' and, as Mrs Bird mutters darkly, "There’s no knowing where we might end up."" But he’s planning some very good holiday 'doings' indeed for the Browns. And Paddington himself becomes the only bear ever to ride in the famous Tour de France bicycle race – and win a prize!"

""Even Paddington can’t come to much harm in half an hour," said Mrs Brown optimistically. But he can manage a lot of other things in even less time – like hanging Mr Curry’s lawnmower from a tree-top, or coming up through the bandstand floor during the 'Surprise Symphony'.

"Then Paddington has a sticky time of it making toffee in Mrs Bird's kitchen, and an even stickier time explaining what went wrong.

"And who else but Paddington could set Father Christmas's beard on fire?"

""I’ve never known such a bear for smelling things out," said Mrs Bird.

"Paddington’s sharp nose and his talent for getting into difficulties lead him to an orange marmalade tasting party. His enthusiasm lands him in a barrel of marmalade, causing an avalanche in the warehouse. And, one morning, he sniffs out a surprise for himself and discovers that he is about to embark on the greatest adventure of his life."

We also have some wonderful Paddington audiobooks available on CDs and as eAudiobooks. These can be listened to hands-free and so are best enjoyed with a marmalade sandwich.

"Somehow Paddington Bear always manages to find himself in unusual situations. So it is no surprise when he gets into a spot of bother with some shaving cream, causes a London bus to be evacuated, and is mistaken for a famous Peruvian hurdler by a film crew."

"Paddington Bear always manages to find himself in tricky situations, sometimes extraordinary situations. Since arriving from his native Peru after an earthquake Paddington has always felt at home with the Brown family. When a mysterious visitor arrives, it is time for Paddington to decide where 'home' really is."

A Day at the Seaside & other stories

Paddington plays in the sand goes to the theatre, picnics on the river and enjoys Christmas in this collection.

"It takes Paddington a long time to eat 15 packets of currants so that he can enter a competition to win a Rolls-Royce. He wins a bookmark! But he finds himself taking a driving test and, much to his amazement, is presented with a license."