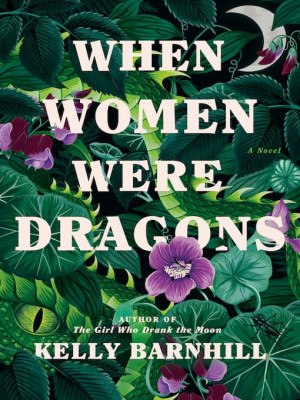 Looking for some new YA titles to read this May? Take a look at our top picks, from a fight for the throne between two sisters to an homage to Agatha Christie's famous detective stories.

When women were dragons, by Kelly Barnhill

The YA debut from the author of The girl who drank the moon.

In this timely and timeless speculative novel, set in 1950s America, Kelly Barnhill exposes a world that wants to keep girls and women small - and examines what happens when they rise up. Alex Green is four years old when she first sees a dragon. In her next-door neighbour's garden, in the spot where the old lady usually sits, is a huge dragon, an astonished expression on its face before it opens its wings and soars away across the rooftops. And Alex doesn't see the little old lady after that.

No one mentions her. It's as if she's never existed. Then Alex's mother disappears, and reappears a week later, one quiet Tuesday, with no explanation whatsoever as to where she has been. But she is a ghostly shadow of her former self, and with scars across her body - wide, deep burns, as though she had been attacked by a monster who breathed fire.

Borrow When women were dragons →

Two sisters. One throne. Who will ultimately rise to power and wear the crown? Wren Greenrock has always known that one day she would steal her sister's place in the palace. Trained from birth to avenge her parents' murder and usurp the princess, she will do anything to rise to power and protect the community of witches she loves. Princess Rose Valhart knows that with power comes responsibility including marriage into a brutal kingdom. Life outside the palace walls is a place to be feared and she is soon to discover that it's wilder than she ever imagined. Twin sisters separated at birth and raised into entirely different worlds are about to get to know each other's lives a whole lot better.

Family of liars, by E. Lockhart

The thrilling prequel to We Were Liars takes readers back to the story of another summer, another generation, and the secrets that will haunt them for decades to come. A windswept private island off the coast of Massachusetts. A hungry ocean, churning with secrets and sorrow. A fiery, addicted heiress. An irresistible, unpredictable boy. A summer of unforgivable betrayal and terrible mistakes. Welcome back to the Sinclair family. They were always liars.

The Agathas, by Kathleen Glasgow and Liz Lawson

When Alice Ogilvie ran away last summer, her disappearance was Castle Cove's biggest mystery. But then her ex-best friend Brooke Donovan vanishes. Initially dismissed as a copycat case, Alice suspects there is something darker at play. Joined by outsider and unlikely investigative partner Iris Adams, Agatha Christie-obsessed Alice sets out to get to the bottom of what is really happening in Castle Cove. There are clues the police are ignoring and a list of suspects a mile long. But Alice and Iris have no idea just how many secrets their little town is hiding.

Only on the weekends, by Dean Atta

From the author of the acclaimed novel Black Flamingo.

15-year-old Mack is a hopeless romantic - he blames the films he's grown up watching. He has liked Karim for as long as he can remember, and is ecstatic when Karim becomes his boyfriend - it feels like love. But when Mack's dad gets a job on a film in Scotland, Mack has to move, and soon he discovers how painful love can be. It's horrible being so far away from Karim, but the worst part is that Karim doesn't make the effort to visit. Love shouldn't be only on the weekends. Then, when Mack meets actor Finlay on a film set, he experiences something powerful, a feeling like love at first sight. How long until he tells Karim - and when will his old life and new life collide?

Borrow Only on the weekends →

Lewis has a few things to say to his younger teen self. He knows she hates her body. He knows she's confused about who to snog. He knows she's really a he and will ultimately realize this. But she's going to go through a whole lot of mess (some of it funny, some of it not funny at all) to get to that point. Lewis is trying to tell her this - but she's refusing to listen. In 'Welcome to St Hell,' author-illustrator Lewis Hancox takes readers on the hilarious, heartbreaking and healing path he took to make it past trauma, confusion, hurt and dubious fashion choices in order to become the man he was meant to be.