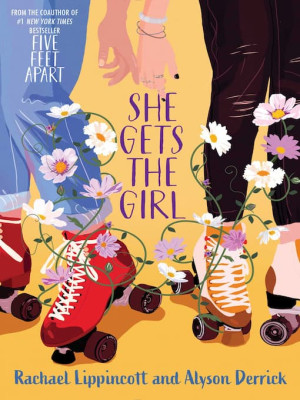 Looking for some new YA titles to read this April? Take a look at our top picks, from fantastical adventures of a young magical bladesmith to heartwarming friends-to-lovers stories.

The imagination chamber, by Philip Pullman

Master storyteller Philip Pullman returns to the world of Lyra and Will, Mrs Coulter and Lee Scoresby, Pantalaimon and Iorek Byrnison, in this must-have companion to the 'His Dark Materials' trilogy. Philip Pullman cuts new windows into his worlds for the reader to step through and reveals new truths about many of the iconic characters from Lyra's universe.

The new companion title to the His Dark Materials series.

Blade of secrets, by Tricia Levenseller

Eighteen-year-old Ziva prefers metal to people. She spends her days tucked away in her forge, safe from society and the anxiety it causes her, using her magical gift to craft unique weapons imbued with power. Then Ziva receives a commission from a powerful warlord, and the result is a sword capable of stealing its victims' secrets. A sword that can cut far deeper than the length of its blade. A sword with the strength to topple kingdoms.

When Ziva learns of the warlord's intentions to use the weapon to enslave all the world under her rule, she takes her sister and flees. Joined by a distractingly handsome mercenary and a young scholar with extensive knowledge of the world's known magics, Ziva and her sister set out on a quest to keep the sword safe until they can find a worthy wielder or a way to destroy it entirely.

You can trust me, by Gina Blaxill

When Alana's best friend is found drowned in a pool, the forensic reports discover date-rape drug GHB in her blood. GHB from a drink Alana knows was meant for her. Despite the swirling rumours, the suspected group of boys seem untouchable. To investigate, Alana allows herself to be pulled into their glittering orbit. But among shifting alliances, changing alibis and buried secrets, can she pinpoint which of the boys is responsible before she becomes their next target?

Borrow You can trust me →

She gets the girl, by Rachael Lippincott and Alyson Derrick

Alex Blackwood is a little bit headstrong, with a dash of chaos and a whole lot of flirt. She knows how to get the girl. Keeping her on the other hand - not so much. Molly Parker has everything in her life totally in control, except for her awkwardness with just about anyone besides her mum. She knows she's in love with the impossibly cool Cora Myers. She just hasn't actually talked to her yet.

Alex and Molly don't belong on the same planet, let alone the same college campus, but when their paths cross unexpectedly, and Alex discovers Molly's hidden crush, they realise they might have a common interest after all. Because maybe if Alex can help Molly to get her dream girl, she can prove to her ex that she's serious about love. As the two embark on their five-step plans to get their girls to fall for them, though, they both begin to wonder if maybe they're the ones falling - for each other.

New title from the author of Five feet apart.

Borrow She gets the girl →

The crown of kings and The seven serpents, by Steve Jackson

You, the hero, must face the unknown terrors of the Mampang Fortress. Hidden inside the keep is the Crown of Kings, but beware the monsters and traps waiting for you.

Borrow The crown of kings →