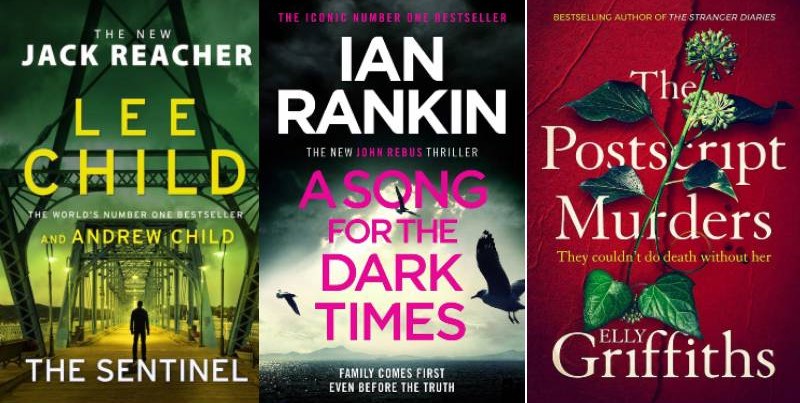 The Sentinel, by Lee and Andrew Child

Jack Reacher gets off a bus in Nashville, Tennessee, in a quest for food, lodging and some good country music. But when he encounters a band of musicians who have been cheated by an unscrupulous bar owner, he steps in to help.

This is the first Jack Reacher novel written by both Lee Child and his brother Andrew (Grant). There is sure to be huge demand so get your reservation in soon!

Reserve The Sentinel, by Lee and Andrew Child

A Song for the Dark Times, by Ian Rankin

Rankin weaves a gripping story of mystery and suspense, threaded through with some of the most important issues and themes of our time, in the new John Rebus thriller.

Reserve A Song for the Dark Times, by Ian Rankin

The Postscript Murders, by Elly Griffiths

The death of a ninety-year-old woman with a heart condition should absolutely not be suspicious. DS Harbinder Kaur certainly sees nothing to concern her in carer Natalka's account of Peggy Smith's death. But when Natalka reveals that Peggy lied about her heart condition and that she had been sure someone was following her. And that Peggy Smith had been a 'murder consultant' who plotted deaths for authors, and knew more about murder than anyone has any right to. And when clearing out Peggy's flat ends in Natalka being held at gunpoint by a masked figure. Well then DS Harbinder Kaur thinks that maybe there is no such thing as an unsuspicious death after all.

Our Discovereads online book group will be in discussion with Elly Griffiths on 8 October.

The Moment before Impact, by Alison Bruce

A terrible car accident - or calculated murder? An evening out for five students ends in tragedy, with two dead and one critically injured. Nicci Waldock survives, but her life is left in tatters. Years later, a sighting of Jack Bailey, the brother of her dead friend, leaves her with a shocking realisation about the night of the accident. Helped by former journalist Celia Henry, Nicci sets out to learn the truth about what really happened, and discovers a series of lies and dangerous secrets that have distorted everything she thinks she knows.In uncovering the tangled truth of what happened that night three years ago, Nicci must decide who she can trust, and who is about to kill again. And she realises that everything can be saved or lost in the moment before impact.

Reserve The Moment before Impact, by Alison Bruce

Smart, headstrong Kirabo is raised by her grandparents in rural Uganda. But as she enters her teens, she starts to feel overshadowed by the absence of the mother she has never known. At once epic and deeply personal, 'The First Woman' is the bold and piercing story of one young girl's discovery of what it means to be a woman in a family, a community and a country that seem determined to silence her.

Following the discovery of the corpse of a highly respected parish priest at Ballyglass House - the Co. Wexford family seat of the aristocratic, secretive Osborne family - Detective Inspector St John Strafford is called in from Dublin to investigate. Strafford faces obstruction from all angles, but carries on determinedly in his pursuit of the murderer. However, as the snow continues to fall over this ever-expanding mystery, the people of Ballyglass are equally determined to keep their secrets.

Hot to Trot, by M.C. Beaton

Private Detective Agatha Raisin immerses herself in the glittering lifestyle of the fabulously wealthy when Sir Charles Fraith is accused of murder - and Agatha is named as his accomplice! A high-society wedding, a glitzy masked ball, and an introduction to the world of international show-jumping where the riders are glamorous, the horses are beautiful, and intrigue runs deep, leave Agatha with a list of suspects as long as a stallion's tail. Sinister evidence then emerges that appears to seal Sir Charles's fate and Agatha must uncover the truth before a net of skulduggery closes around him and he loses his ancestral home, his entire estate, and his freedom.

To the outside world, suave, charming and confident doctor Marcus Valentine has it all. A loving wife, three kids, a great job. But there's something missing, there always has been - or rather, someone. Driving to work one morning, his mind elsewhere and not on the road, he almost mows down a female jogger on a crossing. As she runs on, Marcus is transfixed. Infatuated. She is the spitting image of a girl he was crazy about in his teens. A girl he has never been able to get out of his mind. Lynette had dumped him harshly. For years he has fantasised about seeing her again and rekindling their flame. Might that jogger possibly be her all these years later? Could this be the most incredible coincidence? Despite all his attempts to resist, he is consumed by cravings for this woman. And when events take a tragically unexpected turn, his obsession threatens to destroy both their worlds.

It is 1987 and a small Irish community is preparing for a wedding. The day before the ceremony a group of young friends drive out to the beach. There is an accident. Three survive, but three are killed. The lives of the families are shattered and the rifts between them are felt throughout the small town. Connor is one of the survivors. But staying among the angry and the mourning is almost as hard as living with the shame of having been the driver. He leaves the only place he knows for another life, taking his secrets with him. But the secrets, the unspoken longings and regrets that have come to haunt those left behind will not be silenced. And before long, Connor will have to confront his past.

The Tower of Fools, by Andrzej Sapkowski

Epic fantasy from the author of The Witcher series.

Reinmar of Bielawa, sometimes known as Reynevan, is a doctor, a magician and, according to some, a charlatan. Discovered in bed with the wife of a high-born knight, he must flee his normal life. But his journeys will lead him into a part of Europe which will be overtaken by chaos. Religious tension between Hussite and Catholic countries is threatening to turn into war. Pursued not only by the affronted Stercza brothers, bent on vengeance, but also by the Holy Inquisition, and with strange, mystical forces gathering in the shadows, Reynevan finds himself in the Narrenturm, the Tower of Fools. The Tower is an asylum for the mad, or for those who dare to think differently and challenge the prevailing order. The 'patients' of this institution form a gallery of colourful types. Can Reynevan escape the Tower, and avoid being drawn in to the conflict around him, without losing his own mind?

Reserve The Tower of Fools, by Andrzej Sapkowski

Hold up the Sky, by Cixin Liu

From the author of 'The Three-Body Problem', a collection of award-winning SF short stories. Liu's writing takes the reader to the edge of the universe and the end of time, to meet stranger fates than we could have ever imagined. With a melancholic and keen understanding of human nature, Liu's stories show humanity's attempts to reason, navigate and, above all, survive in a desolate cosmos.

Reserve Hold up the Sky, by Cixin Liu

The Devil and the Dark Water, by Stuart Turton

It's 1634 and Samuel Pipps, the world's greatest detective, is being transported from the Dutch East Indies to Amsterdam, where he is facing trial and execution for a crime he may, or may not, have committed. Travelling with him is his loyal bodyguard, Arent Hayes, who is determined to prove his friend innocent, while also on board are Sara Wessel, a noble woman with a secret, and her husband, the governor general of Batavia. But no sooner is their ship out to sea than devilry begins to blight the voyage. A strange symbol appears on the sail. A dead leper stalks the decks. Livestock are slaughtered in the night. And then the passengers hear a terrible voice whispering to them in the darkness, promising them three unholy miracles. With Pipps imprisoned, only Arent and Sara can solve a mystery that stretches back into their past and now threatens to sink the ship, killing everybody on board.

Reserve The Devil and the Dark Water, by Stuart Turton

A producer. A novelist. An actress. It is summer in 1968, the year of the assassinations of Martin Luther King and Robert Kennedy. While the world is reeling our trio is involved in making a rackety Swingin' Sixties British movie in sunny Brighton. All are leading secret lives. As the film is shot, with its usual drastic ups and downs, so does our trio's private, secret world begin to take over their public one. Pressures build inexorably - someone's going to crack. Or maybe they all will.

Debut novel from the author of the bestselling Everything I Know About Love.

32-year-old Nina Dean is a successful food writer with a loyal online following, but a life that is falling apart. When she uses dating apps for the first time, she becomes a victim of ghosting, and by the most beguiling of men. Her beloved dad is vanishing in slow motion into dementia, and she's starting to think about ageing and the gendered double-standard of the biological clock. On top of this she has to deal with her mother's desire for a mid-life makeover and the fact that all her friends seem to be slipping away from her.