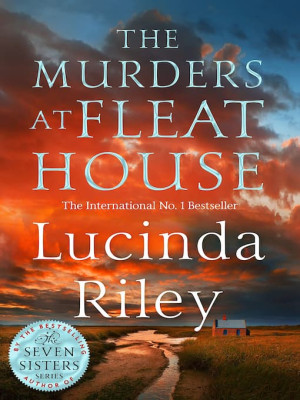 Take a look at our latest fiction titles for May 2022.

The murders at Fleat House, by Lucinda Riley

The sudden death of a pupil in Fleat House at St Stephen's - a small private boarding school in deepest Norfolk - is a shocking event that the headmaster is very keen to call a tragic accident. But the local police cannot rule out foul play and the case prompts the return of high-flying Detective Inspector Jazmine 'Jazz' Hunter to the force. Jazz has her own private reasons for stepping away from her police career in London, and reluctantly agrees to front the investigation as a favour to her old boss.

Reunited with her loyal sergeant Alastair Miles, she enters the closed world of the school, and as Jazz begins to probe the circumstances surrounding Charlie Cavendish's tragic death, events are soon to take another troubling turn. Charlie is exposed as an arrogant bully, and those around him had both motive and opportunity to switch the drugs he took daily to control his epilepsy.

Borrow The murders at Fleat House →

A governmental think-tank, whose remit is to curb the independence of the intelligence service, has lost one of its key members, and Claude Whelan - one-time head of MI5's Regent's Park - is tasked with tracking her down. But the trail leads straight back to the Park itself, with Diana Taverner as chief suspect. Has Diana overplayed her hand at last? What's her counterpart, Moscow's First Desk, doing in London? And does Jackson Lamb know more than he's telling?

Over at Slough House, with Shirley Dander in rehab, Roddy Ho in dress rehearsal, and new recruit Ashley Khan turning up the heat, the slow horses are doing what they do best, and adding a little bit of chaos to an already unstable situation.

A lady's guide to fortune-hunting, by Sophie Irwin

Kitty Talbot needs a fortune. Or rather, she needs a husband who has a fortune. This is 1818 after all, and only men have the privilege of seeking their own riches. With only 12 weeks until the bailiffs call, launching herself into London society is the only avenue open to her, and Kitty must use every ounce of cunning and ingenuity she possesses to climb the ranks.

The only one to see through her plans is the worldly Lord Radcliffe and he is determined to thwart her at any cost, especially when it comes to his own brother falling for her charms. Can Kitty secure a fortune and save her sisters from poverty? There is not a day to lose and no one - not even a lord - will stand in her way.

Borrow A lady's guide to fortune-hunting →

September, 1939. As the mass evacuation takes place across Britain, thousands of children leave London for the countryside, but when a little girl vanishes without trace, the reality of separation becomes more desperate and more deadly for those who love her. In the chaos and uncertainty of war, Josephine struggles with the prospect of change. As a cloud of suspicion falls across the small Suffolk village she has come to love, the conflict becomes personal, and events take a dark and sinister turn.

England, 1989. Over the course of a burning hot summer, two very different men - traumatized Falklands veteran Calvert, and affable, chaotic Redbone - set out nightly in a clapped-out camper van to undertake an extraordinary project. Under cover of darkness, the two men traverse the fields of rural England in secret, forming crop circles in elaborate and mysterious patterns.

As the summer wears on, and their designs grow ever more ambitious, the two men find that their work has become a cult international sensation - and that an unlikely and beautiful friendship has taken root as the wheat ripens from green to gold. Moving and exhilarating, tender and slyly witty, 'The Perfect Golden Circle' is a captivating novel about the futility of war, the destruction of the English countryside, class inequality - and the power of beauty to heal trauma and fight power.

It's every parent's nightmare. Your happy, funny, innocent son commits a terrible crime: murdering a complete stranger. You don't know who. You don't know why. You only know your teenage boy is in custody and his future lost. That night you fall asleep in despair. Until you wake - and it is yesterday. Every morning you wake up a day earlier, another day before the murder. Another chance to stop it. Somewhere in the past lie the answers - and you don't have a choice but to find them.

Just got real, by Jane Fallon

When happily divorced Joni is reluctantly talked into joining a dating app, she is surprised to quickly hit it off with Ant. Phone calls and texts soon evolve into a plan to meet up. Which is a problem, as Joni's profile picture is of someone else. Joni daren't confess her lie. Yet unable to stop thinking about what might have been, she hatches a plan to 'meet' Ant in real life without revealing who she really is.

Once she and Ant are an item, however, it's soon clear that the only thing Ant was honest about was his profile picture. He's still online dating. And intimately texting other women. So Joni contacts them - they need to know. And once they're comparing notes on Ant, upset turns to thoughts of revenge. But how do you get your own back on a truly heartless man?

You made a fool of death with your beauty, by Akwaeke Emezi

Feyi is about to be given the chance to escape the city's blistering heat for a dream island holiday: poolside cocktails, beach sunsets and elaborate meals. And as the sun goes down on her old life, our heroine also might just be ready to open her heart to someone new. The only problem is, she's falling for the one man she absolutely can't have.

Borrow You made a fool of death with your beauty →

You have a friend in 10A, by Maggie Shipstead

Here are sparkling award-winning stories from Maggie Shipstead, epic storyteller and astonishing chronicler of the daring and the damaged. Diving into eclectic and vivid settings, from an Olympic village to a deathbed in Paris to a Pacific atoll, and illuminating a cast of unforgettable characters, Shipstead traverses the ordinary and extraordinary with cunning, compassion, and wit.

Elizabeth of York: the last white rose, by Alison Weir

Eldest daughter of the royal House of York, Elizabeth dreams of a crown to call her own. But when her beloved father, King Edward, dies suddenly, her destiny is rewritten. Her family's enemies close in. Two young princes are murdered in the Tower. Then her uncle seizes power - and vows to make Elizabeth his queen.

But another claimant seeks the throne, the upstart son of the rival royal House of Lancaster. Marriage to this Henry Tudor would unite the white rose of York and the red of Lancaster - and change everything. A great new age awaits. Now Elizabeth must choose her allies - and husband - wisely, and fight for her right to rule.

One moonlit night, by Rachel Hore

When the family home in London is bombed in the early 1940s, Maddie and her two young daughters take refuge in Norfolk, in the country house where Maddie's husband Philip spent the summers of his childhood. But Philip is gone, believed to have been killed in action in northern France. Despite overwhelming evidence to the contrary, Maddie refuses to give up hope that she and Philip will some day be reunited. Something happened at Knyghton one summer years before. Something unresolved, that involved Philip, his cousin Lyle and a mysterious young woman named Flora. Maddie's curiosity, which turns to desperation to find out the truth, is shut down at every turn. No one will speak about it, and no one will reassure Maddie that Philip will ever return to Knyghton.

Dublin, 7th October 2019. One day, one city, two women - Ruth and Pen. Neither known to the other, but both asking themselves the same questions - how to be with others and how, when the world doesn't seem willing to make space for them, to be with themselves? Ruth's marriage to Aidan is in crisis. Today she needs to make a choice - to stay or not to stay, to take the risk of reaching out, or to pull up the drawbridge. For teenage Pen, today is the day the words will flow, and she will speak her truth to Alice, to ask for what she so desperately wants. Deeply involving, poignant and radiantly intelligent, it is a portrait of the limits of grief and love, of how we navigate our inner and outer landscapes, and the tender courage demanded by the simple, daily quest of living.

The cook, by Ajay Chowdhury

Kamil Rahman is a cook in a Brick Lane restaurant. But he used to be a detective back in Kolkata. And somehow trouble still knows how to find him. When a young woman Kamil knows is murdered the police are convinced her boyfriend is the culprit. Kamil isn't so sure and feels he has no choice but to start his own investigation. Meanwhile, his friend and restaurant manager, Anjoli, is troubled by a rise in the number of homeless deaths in their local area.

The cases seem unrelated and as the duo dig deeper, discovering tentacles that stretch from Lahore to London, they find themselves in grave danger. Together they take on the indifference of the authorities to the homeless and the casual racism that pervades the investigation of killings of Muslims - all while a supremely intelligent murderer is manipulating events to stay several steps ahead of them.

Becky: a single mum who prides herself on her independence. She knows from painful experience that men are trouble.Louise: a loving husband, gorgeous kids. She ought to feel more grateful. Jameela: all she's ever done is work hard, and try her best. Why won't life give her the one thing she really wants? Sheila: the nest is empty, she dreams of escaping to the sun, but her husband seems so distracted. The inhabitants of the Inventor's Housing Estate keep themselves to themselves. There are the friendly 'Hellos' when commutes coincide and the odd cheeky eye roll when the wine bottles clank in number 7's wheelie bin, but it's not exactly Ramsay Street. The dilapidated community centre is no longer the beating heart of the estate that Becky remembers from her childhood. So the new pottery class she's helped set up feels like a fresh start. And not just for her.