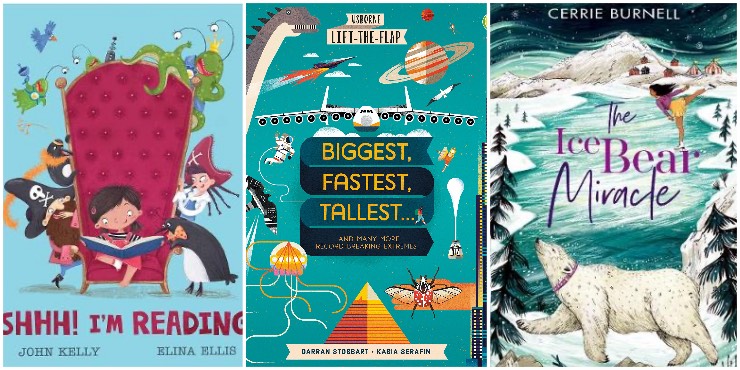 A new addition to the Busy Books series with tabs to push, pull and slide.

The little pig gets active for the new year.

My First Yoga: fun and simple yoga poses for babies and toddlers, by DK

"Let your baby or toddler discover the joys of yoga through the simple poses in this yoga book for kids. With a range of gentle poses carefully selected in an order that will engage, energise, and then relax, this book can be accessed by all abilities."

"Bella is busy reading. Please come back when she has finished this UTTERLY AMAZING and TOTALLY INCREDIBLE book!"

We Catch the Bus, by Kate Abey

Follow-up to We Eat Bananas and We Wear Pants.

"Choose your favourite vehicle and let's go! Join all the busy animals as they zoom around in every kind of vehicle you can imagine, vibrantly illustrated by the talented Katie Abey. Is that a cheeky monkey flying a plane? And did I see a llama riding a scooter? And there's a whole pack of animals catching that bus.

"All the animals are on the move in their favourite vehicles, zipping by in their own hilarious way. Travel across airports, race through city streets in fire engines and drive around building sites."

"Gorilla is hungry but there is absolutely no way he's going to eat a banana. Not even a teeny taste. Not with some bread or standing on his head. Even if you eat one too, which is something you might do."

"Bad Banana has had enough. And he's going BANANAS! It's time for the unruly fruit to shake off their labels - can Bad Banana show the other fruit what going bad REALLY means?"

"Knock, knock! There's a superhero at the door! Pasta Man has run out of Pasta Power... Can our young hero help him to get his powers back and defeat evil Madame Chilli, who wants to rule the world with lashings of chilli sauce?"

"When Winnie and Wilbur decide to celebrate Chinese New Year, the party is going with a swing. Family? Check! Friends? Check! Food? Check! Fun? Check! But just when Winnie waves her wand to make parade costumes for everyone, Wilbur goes missing. Oh no! Will Winnie find him before the first firework lights up the sky?"

A Hat for Mr Mountain, by Soojin Kwak

Debut from the runner-up of the Macmillan Prize for Illustration.

"Nara loves to make hats of all shapes and sizes for the animals who visit her workshop in the forest. Then one day she receives a letter from Mr Mountain: he wants a hat, too. Nara is up for the challenge, and knits him an enormous woolly hat - which is perfect until it shrinks in the rain. The leaf hat is eaten, the stick hat burns to the ground. What other material can she try?"

The Boy Who Fooled the World, by Lisa Thompson

"Cole's family is struggling to make ends meet and he doesn't fit in with the rich kids at his school. Until the day a painting Cole made in Art class is unexpectedly spotted and sold in a posh London gallery for thousands of pounds. Suddenly, he's the toast of the international art world, invited on prime time chat shows, hailed as a boy genius!

"But Cole has been keeping a secret - he is not the creator of the painting; the white lie he told has spiralled out of control and his world will crumble when he's exposed on live television. His family is plunged back into poverty, and there's only one way out: Cole must crack the riddle of a mysterious painting that promises the clues hidden within it will lead the solver to great riches."

The Monsters in the Lake, by Louie Stowell & Davide Ortu

Follow-up to The Dragon in the Library.

"Kit is a wizard. The youngest wizard in the world, in fact. But her magic keeps going wrong, and all kinds of weird stuff has started happening - exploding fireballs, animals talking when they shouldn't be, and a very strange new arrival in a nearby park. So Kit and her two best friends - along with their local librarian - set off to investigate, and to save the world - again."

The concluding part to the Cogheart series.

"Swept into the bright hustle and bustle of New York, Lily, Robert and Malkin discover shadowy secrets lie beneath its surface. For there are chilling goings-on in their hotel. A strange boy held captive, haunted by an undersea mystery; and a revengeful villain with a treacherous plan. Searching for clues, Robert and Lily are plunged into deep water. But can they reveal the deadly truth before the secrets submerge them?"

From the author of The Girl with the Shark's Teeth.

"Somewhere in the deep and frozen north is an island surrounded entirely by ice. The inhabitants love their snowstorm isle - with its scattered wooden cottages, its small patches of forest, and its single mountain peak. Most of all they love the magnificent ice bears that roam the streets, giving the island its name - the Isle of Bears.

"Life with bears is dangerous, as Marv Jackson knows - the large crescent moon shaped scar on his face acts as a constant reminder of the night he survived a bear attack. But something tells him the legendary tale of that night, isn't quite the full story, and that the truth lies with a mysterious skating girl and her magnificent polar bear."

The Girl Who Stole an Elephant, by Nizrina Farook

"Chaya, a no-nonsense, outspoken hero, leads her friends and a gorgeous elephant on a noisy, fraught, joyous adventure through the jungle where revolution is stirring and leeches lurk. Will stealing the queen's jewels be the beginning or the end of everything for the intrepid gang?"

"A gripping Roman adventure told by a young North African girl who sets out on a danger-filled journey to Britain.

"When Camillla, a young North African girl, travels from Leptis Magna to Britain with her family, she believes that she is going on a great adventure and will eventually return to Roman Libya enriched with life experience. However, on the journey she is separated from half of her family. When they arrive in Britain, they discover that the Roman emperor Septimus Severus has died.

"Lost in the confusion of an empire without a ruler, Camilla is believed dead by her father and left behind on the island of Britain when her family sail away. Will she ever find her family again? What will become of Camilla in this frightening foreign land?"

Lalani of the Distant Sea, by Erin Entrada Kelly

From the author of the Newberry Award-winning Hello, Universe.

"Life is hard on the island of Sanlagita. To the west looms a vengeful mountain, one that threatens to collapse and bury the village at any moment. To the north, a dangerous fog swallows sailors who dare to venture out, looking for a more hospitable land. The women live in fear of the deadly mender's disease, spread by the sharp needles they use to repair the men's fishing nets.

"When Lalani Sarita's mother pricks her finger and falls ill, she gives twelve-year-old Lalani an impossible task - leave Sanlagita and find the riches of the legendary Mount Isa, which towers on an island to the north. But generations of men and boys have died on the same quest."

Fourth in the series.

"You can always count on Mr Dog to help an animal in trouble...

"When Mr Dog takes a trip into town, he doesn’t expect to stay for long. But then he meets a fox who needs his help – a fox who’s very far from home..."

Part of the Usborne lift the flap series.

"A dynamic, visual collection of the biggest, tallest, fastest, strongest, highest, deepest, longest and furthest things in the world - and beyond. Simple facts are coupled with eye-popping visuals that show off the sheer scale of each superlative."

A Street Through Time: a 12,000 year journey along the same street, by Steve Noon

An updated version of the classic book.

"Think of the street you live on. Now think of how it may have looked in the Stone Age in 10,000 BCE, or in Victorian times during the Industrial Revolution, or how it may look 50 years from now.

"Highly detailed illustrations bring 15 key periods in time to life. You will see magnificent buildings go up and come down, new churches built on the site of ancient temples, wooden bridges destroyed and then remade in stone, and statues demolished then unearthed many years later."

China Through Time: a 2,500 year journey along the world's greatest canal, by DK

"Spanning 2,500 years and 1,794 km (1,115 miles), China's Grand Canal runs from Hangzhou in the south to Beijing in the north. China Through Time tells the fascinating story of the world's longest - and oldest - canal."

"An interactive quiz book all about fake news - can you spot the truth from the lies?

"Trump may have been shouting all about 'FAKE NEWS' but it has been a phenomenon since way before he was born. Can you help sort the fact from the fiction through a series of true or false questions about everything from dinosaurs to presidents to weird science? Quiz your friends, your parents, your grandparents or even your teachers to see if you can discover the true stories behind some of the world's most enduring facts and weirdest hoaxes."

Respect: consent, boundaries and being in charge of you, by Rachel Brian

"Your body belongs to you and you get to set your own rules, so that you may have boundaries for different people and sometimes they might change. Like when you hi-five your friends and kiss your kitten, but not the other way round.

"But consent doesn't need to be confusing. From setting boundaries, to reflecting on your own behaviour and learning how to be an awesome bystander, this book will have you feeling confident, respected, and 100% in charge of yourself and your body."