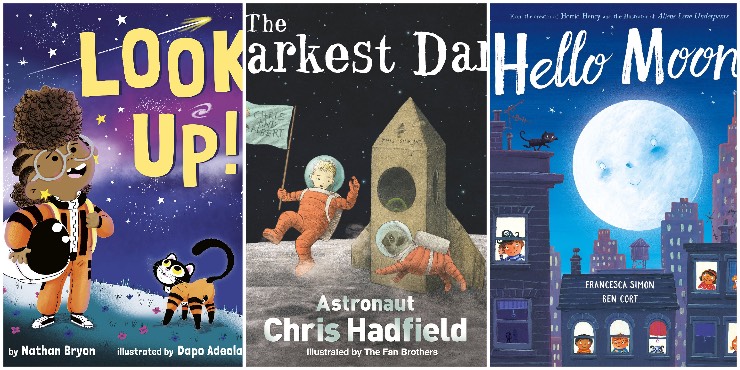 This July, it's 50 years since Neil Armstrong and Buzz Aldrin set foot on the Moon. We've picked out some brilliant books for younger children to mark the occasion.

The anniversary is also the inspiration behind Space Chase, this year's Summer Reading Challenge theme.

Curious toddlers are invited to explore the Moon with this engaging title from the Little World series.

"A delightful and funny introduction to space exploration for the very youngest of readers."

"A novelty board book for toddlers about the first Moon landing in 1969, with push, pull and turning mechanisms."

How to be on the Moon, by Viviane Schwarz

"In the sequel to the bestselling How to Find Gold, best friends Anna and Crocodile are going on another intrepid adventure - this time, to the moon! But soaring into the space is no simple task. To start with, it's very far away. Then there's the not-so-simple matter of building a rocket. And there are the sandwiches to make for the journey. But when Anna and Crocodile set their sights on something, nothing can stand in their way."

"Molly the moth lives in the back of an old wardrobe. She loves her home and her family but yearns for adventure. She wants to fly to the moon. So by day she helps her mother look after the larvae, and by night she prepares for her space mission, until she is ready for BLAST OFF!"

Field Trip to the Moon, by John Hare & Jeanne Willis

"Blast-off on a field trip to the moon and discover what happens to one student when they're accidentally left behind."

The Queen's Lift-off, by Steve Antony

"The Queen's off to space! Travelling at the speed of light, she goes where no man (or Queen) has gone before. From the Moon to Mars, via Mercury. No planet is left unexplored. But will she be back in time for tea?"

Trip to the Moon, by Adam Hargreaves

"The Mr Men are going on a trip to the moon! Well, the Mr Men who can fit in a space suit and helmet! Will the moon really be made of cheese as Mr Greedy thinks, and will there be any cows jumping overhead?"

"Armstrong the mole doesn't dig living underground. His friends think building a rocket to go to the moon, alone, is an astronomically bad idea, but Armstrong is determined to boldly go where no mole has gone before."

"Young Chris is an astronaut. A very busy astronaut. Saving the planet from aliens is much more important than taking baths or going to bed. Because at bedtime the worst sort of alien appears - darkness.

"But when Chris watches the first televised moon landing, he discovers that there is a dark out in space that is much darker than he's used to. It's the darkest dark ever, and he realises that the unknown can be exciting!"

The Usborne Book of the Moon, by Laura Cowan & Diana Toledano

"For thousands of years, the Moon has been the one thing in the night sky that everyone anywhere on our planet recognises. Trace the story of the Moon around the world and throughout history, from ancient legends about its creation, to its first sighting through a telescope, right up until the Apollo 11 mission and the first Moon landing in 1969."

"Rocket's going to be the greatest astronaut, star-catcher space-traveller that has ever lived! But first, she needs to convince her big brother Jamal to stop looking down at his phone and start looking up at the stars."

"When a little boy decides to talk to the moon at bedtime, his questions are seemingly endless. He wants to know all about the moon and how far it can see - from the sky-topped mountains, to the very bottom of the sea, where the mermaids swim. Does the moon have a bouncy bed? Does it like eating chocolate ice-cream? And does the moon feel lonely sometimes?

"Perfect for sharing at bedtime, this dreamy, thoughtful story touches on themes of friendship and kindness."

The First Hippo on the Moon, by David Walliams

"Two big hippos. One enormous dream. Who can make it to the moon first?"

"One small hop for a rabbit. One giant leap for mankind.

"This limited edition tells the iconic tale of Peter Rabbit, while celebrating the cultural impact and scientific achievement of the Apollo 11 moon landing, 50 years ago in July 1969. To celebrate an iconic cultural moment in human history, we have designed this playful and stylish imagining of one small rabbit landing on one large moon."