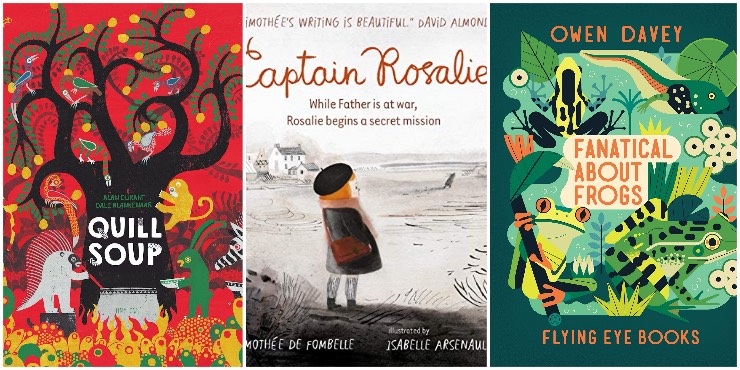 The Kate Greenaway prize celebrates the best-illustrated children's and Young Adult books from the past year.

"A little girl called Rosalie is a captain on a very secret mission - a mission to learn how to read. Mother reads often to Rosalie, especially when Father sends them letters from the front line describing the forest in the distance, the churned-up soil and the soldiers hiding in holes. But as Rosalie gets further along in her mission and begins to piece together the words in her father's letters, the truth about the consequences of war are finally and irrevocably revealed."

"Idris is a child refugee, born into a world of tents and fences. He has known no other life than this. He has no memories of the world outside. Then the Wisp arrives, floating in on the evening breeze. Everyone who holds it finds their memories reawakened, their hopes of freedom reborn. But what about Idris, who has no memories? What will happen when he holds the magical Wisp?"

"Noko, the porcupine, is very hungry. On arriving at a village, he asks the other animals for some food and shelter. But, despite their full bellies, all the animals say they have nothing to spare. Never mind: he'll just have to make do and cook a pot of soup from the quills off his back - a soup so tasty even the king likes it. Once the villagers hear of his plan they offer just enough ingredients to make a soup worthy of them all.

"This African version of Stone Soup celebrates generosity and kindness - and the message that we can all benefit if we share our resources."

B is for Baby, illustrated by Angela Brooksbank, written by Atinuke

"One morning after breakfast, Baby's big brother is getting ready to take the basket of bananas all the way to Baba's bungalow in the next village. He'll have to go along the bumpy road, past the baobab trees, birds, and butterflies, and all the way over the bridge. But what he doesn't realise is that his very cute, very curious baby sibling has stowed away on his bicycle."

And the Ocean Was Our Sky, illustrated by Rovina Cai, written by Patrick Ness

"'Call me Bathsheba'. So begins this haunting novel, echoing the most famous opening sentence ever written. In this novel, the world of Moby Dick is turned upside down, and we see the story through the eyes of the whale. Bathsheba's tale is of the hunt for a legend and a myth, the hunt for a devil named Toby Wick, whose white hull lurks in the deep. She is bound by an ancient prophecy to find him. But is he really the devil that Bathsheba seeks?"

Fanatical About Frogs, by Owen Davey

"Leap into this fascinating illustrated guide to the most diverse amphibians in the world, from the lumbering common toad to the beautiful but deadly poison dart frog."

Voyages in the Underworld of Orpheus Black, illustrated by Alexis Deacon, written by Marcus & Julian Sedgwick

"Harry Black wakes in hospital to learn that his brother Ellis has almost certainly been killed by a V2 rocket falling during a German air raid on London. In a state of wounded delirium, Harry’s mind begins to blur the distinctions between the reality of the war-torn city, the fiction of his unpublished sci-fi novel and the myth of Orpheus and Eurydice. Driven by visions of Ellis still alive and a sense of poetic inevitability, Harry discharges himself from hospital and begins a search for his brother that will lead him deep into the city’s Underworld."

"Lubna's best friend is a pebble. Lubna tells Pebble everything. About home. About the war. Pebble always listens to her stories and smiles when she feels afraid. But one day, when a little boy arrives, alone in a world of tents, Lubna poignantly understands that he needs Pebble even more than she does."

When Sadness Comes to Call, by Eva Eland

"When Sadness arrives, try not to be afraid: give it a name, listen to it and spend some time together. Maybe all it wants is to know that it's welcome.

"This beautiful debut by new author-illustrator talent Eva Eland takes a poignant but uplifting look at dealing with uncomfortable emotions."

The King Who Banned the Dark, by Emily Haworth-Booth

"When a king bans the dark completely, installing an artificial sun, and enforcing 'anti-dark' laws, it seems like a good idea. The citizens don't need to worry about monsters, crime, or any of the other scary things that might live in the dark. But what happens when nobody can sleep? Will the citizens revolt?"

You're Snug with Me, illustrated by Poonam Mistry, written by Chitra Soundar

"At the start of winter, two bear cubs are born, deep in their den in the frozen north. 'Mama, what lies beyond here?' they ask. 'Above us is a land of ice and snow.' 'What lies beyond the ice and snow?' they ask. 'The ocean, full of ice from long ago.' And as they learn the secrets of the earth and their place in it, Mama Bear whispers, 'You're snug with me.'"

"Mankind must put a stop to the dreadful destruction by the Iron Man and set a trap for him, but he cannot be kept down. Then, when a terrible monster from outer space threatens to lay waste to the planet, it is the Iron Man who finds a way to save the world."

The Suitcase, by Chris Naylor-Ballesteros

"When a strange-looking animal arrives pulling a big suitcase, the other animals are curious. What on earth could be inside the suitcase? When the animals break into the suitcase and discover a very special photograph, they begin to understand what the strange creature has been through, and together they create a very special welcome present."

The Undefeated, illustrated by Kadir Nelsonm written by Kwame Alexander

"Originally performed for ESPN's The Undefeated, this poem is a love letter to black life in the United States. It highlights the unspeakable trauma of slavery, the faith and fire of the civil rights movement, and the grit, passion, and perseverance of some of the world's greatest heroes. The text is also peppered with references to the words of Martin Luther King, Jr., Langston Hughes, Gwendolyn Brooks, and others, offering deeper insights into the accomplishments of the past, while bringing stark attention to the endurance and spirit of those surviving and thriving in the present."

The Dam, illustrated by Levi Pinfold, written by David Almond

"When a great dam was built by the Kielder Water in Northumberland, the valley below slowly filled with water. But just before this, when the villagers had been moved out, two musicians went back to the abandoned valley. They tore down the boards over the houses, stepped inside and started to play - for this would be the last time that music would be heard in this place."

"Mary loves stories, but the stories in her daydreams are far more thrilling than those in any book. After a troubled childhood, eighteen-year-old Mary runs away to Switzerland with the famous poet Percy Bysse Shelley, her step-sister in tow. One dark and stormy night at his house by the lake, they huddle around the fire, telling ghost stories. But Mary can imagine better than those!

"After learning about electricity that can make dead frogs twitch, she has a nightmare that triggers the birth of one of the greatest scary stories of all time: Frankenstein."

"Little Wise Wolf has time for only one thing: reading books. All right, two things: at night he studies the stars. When the other animals come to him to get answers to their difficult questions, Little Wise Wolf has no time for that. Until one day, a raven appears. The king turns out to be seriously ill, and Little Wise Wolf is called on to use his knowledge to make him better again.

"On the way to the palace it turns out that, although Little Wise Wolf may know a lot about the things he has read in his books, and seen in the stars, he has a lot to learn about the outside world."

Tales from the Inner City, by Shaun Tan

"A reflection on the nature of humans and animals, and our urban co-existence. From crocodile to frog; tiger to bee, this is a dark and surreal exploration of the perennial love and destruction we feel and inflict - of how animals can save us, and how we are entwined, for better or for worse."

"For over 2000 years, the inhabitants of St Kilda maintained a thriving, tightly-knit community on one of the most inhospitable places on Earth - 'the island at the edge of the world'. Theirs was an isolated lifestyle completely dependent on the seasons and the elements for its survival. A lifestyle out of which developed a culture based on subsistence, resilience, mutual trust and caring. A culture that knew no crime, had no need of cash, and took care of its weakest members without question.

"This unique way of life came abruptly to an end in August 1930, when the now-depleted community of only 36 men, women and children begged the British Government to evacuate them to the mainland. Why did the islanders leave, and where did they go? What became of them?"

"Welcome to Planetarium. This museum is open all hours. It houses an incredible collection of astronomical objects, from small, icy moons to huge swirling galaxies. So how big is the Universe? How did it begin and what mysteries does it hold? With specially written text for younger readers, step inside to explore the Universe in all its glory."