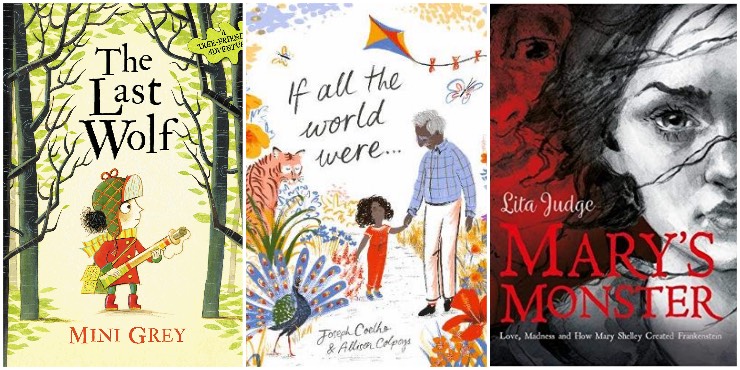 The Kate Greenaway prize celebrates the best-illustrated children's and Young Adult books from the past year.

"When a man returns to his childhood home and visits the derelict tree house in which his father once chose to live, he recalls the past unravelling of his family, the unspoken strangeness of their lives, and the impact on his own adult life."

Fantastic Beasts and Where to Find Them: illustrated edition, illustrated by Olivia Lomenech Gill, written by J. K. Rowling

"Celebrate 20 years of Harry Potter magic! This glorious new edition of Newt Scamander's Fantastic Beasts and Where to Find Them (considered a classic throughout the wizarding world) features an extraordinary array of magical creatures, from Acromantula to Yeti via 10 different breeds of dragon - all beautifully illustrated in full colour."

Beyond the Fence, by Maria Gulemetova

"A small pig lives in a large house with a boy who tells him how to dress and what to do. One day, however, he meets a wild pig who introduces him to life 'beyond the fence'.

"Quirky and charming, this debut book contains important messages about individuality and making your own choices."

"Ebo: alone. His sister left months ago. Now his brother has disappeared too, and Ebo knows it can only be to make the hazardous journey to Europe. Ebo's epic journey takes him across the Sahara Desert to the dangerous streets of Tripoli, and finally out to the merciless sea. But with every step he holds on to his hope for a new life, and a reunion with his sister."

"Mary's Monster is the compelling and beautifully illustrated story of Mary Shelley - the original rebel girl. When her fractured bond with her beloved father, and her elopement with the mercurial (and married) poet Percy Bysshe Shelley at the age of 16, led her to Switzerland, few could have imagined the consequence would be such a book. But, in the crucible of societal disapproval and tenuous circumstances, Mary Shelley created Frankenstein, and his monster, forged in the fire of her troubled and tragic life.

"Part biography, part fantasy and part feminist allegory, Mary's Monster is an engrossing take on one remarkable woman. And her monster."

You're Safe with Me, illustrated by Poonam Mistry, written by Soundar Chitra

"When the moon rises and the stars twinkle, it is bedtime for the baby animals of the Indian forest. But tonight, when the skies turn dark and the night grows stormy, the little ones can't sleep. Only Mama Elephant with her words of wisdom can reassure them 'You're safe with me'."

"Bob the bird loves to paint pictures with his best friend Bat. But one day Bat goes away and Bob is sad. He tries to paint, but everything he paints is blue! Can his friends help him to find his bright colours again?"

Suffragette: The Battle for Equality, by David Roberts

"The year 2018 marks a century since the first women won the vote in the United Kingdom, and this book tells the story of their fight. This is a tale of astounding bravery, ingenuity and strength. David’s conversational style is accessible and his artwork full of rich detail, bringing to life the many vivid characters of the Suffragette movement - from the militant activist and wheelchair user Rosa May Billinghurst to the world-famous Emmeline Pankhurst."

This Zoo is Not for You, by Ross Collins

"When a platypus visits the zoo, the animals all assume he has come about the vacancy and he is swiftly taken through a rigorous interview process. But the platypus is far too bland for the chameleons and not nearly graceful enough for the flamingos.

"So, he leaves. The animals soon regret being so unkind, but - what's this? The platypus has left an invitation! It seems he had actually come to the zoo to invite them all to his party."

"When Mr Noah builds the ark, he makes two lists - one for all the animals who will come on board and one for those troublesome creatures he will leave behind. Meanwhile, Mrs Noah gets out her sewing machine and makes a coat with very deep pockets. Lots of pockets."

"All over the country, there are words disappearing from children's lives. These are the words of the natural world - Dandelion, Otter, Bramble and Acorn, all gone. The rich landscape of wild imagination and wild play is rapidly fading from our children's minds. The Lost Words stands against the disappearance of wild childhood. It is a joyful celebration of nature words and the natural world they invoke."

The Lost Words is also longlisted for the 2019 Carnegie Medal.

The Last Wolf, by Mini Grey

"Once upon a time, Little Red set off into the woods to catch a wolf. But the woods aren't all they seem - and are there even any wolves left?

"The Last Wolf re-imagines the classic Little Red Riding Hood fable in an entirely new way. Can Little Red help her new friends in need and recover the wild days of the past?"

"Finn lives by the sea and the sea lives by him. Every time he looks out his window it's a constant reminder of the stories his grandfather told him about the place where the ocean meets the sky. Where whales and jellyfish soar and birds and castles float.

"Finn's grandfather is gone now but Finn knows the perfect way to honour him. He'll build his own ship and sail out to find this magical place himself! And when he arrives, maybe, just maybe, he'll find something he didn't know he was looking for."

If All the World Were..., illustrated by Allison Colpoys, witten by Joseph Coelho

"A moving, lyrical picture book about a young girl’s love for her granddad and how she copes when he dies, written by poet and playwright Joseph Coelho. This powerful and ultimately uplifting text is the ideal way to introduce children to the concept of death and dying, particularly children who have lost a grandparent."

"The gods of the Vikings come to life as never before in this extraordinary illustrated anthology by Carnegie Medal-winning author Kevin Crossley-Holland and astonishing artist Jeffrey Alan Love.

"These dramatic, enthralling and atmospheric tales are based on the Scandinavian myth cycle - one of the greatest and most culturally significant stories in the world - and tell of Odin with his one eye, Thor with his mighty hammer and Loki, the red-haired, shape-shifting trickster. In this stunning illustrated anthology of myths, the strange world of ancient magic, giants, dwarfs and monsters is unforgettably imagined."

Norse Myths is also longlisted for the 2019 Carnegie Medal.

The Wolf, the Duck and the Mouse, illustrated by Jon Klassen, written by Mac Barnett

"When a woeful mouse is swallowed up by a wolf, he quickly learns he is not alone: a duck has already set up digs and, boy, has that duck got it figured out! Turns out it's pretty nice inside the belly of the beast - there's delicious food, elegant table settings and, best of all, dancing. And there's something more: no fear of being eaten by a wolf!"

A Stone for Sascha, by Aaron Becker

"This year's summer holiday will be very different for a young girl and her family without Sascha, the beloved family dog, along for the ride. But a walk along the beach to gather cool, polished stones becomes a brilliant turning point in the girl's grief. There, at the edge of a vast ocean beneath an infinite sky, she uncovers, alongside the reader, a profound and joyous truth."

"Tiny Cat is playing dressing-up! She rolls up in a rug to become a snake - hiss! And with booties on her paws, she's a horse - neigh! In fact, with oodles of imagination, Tiny Cat can be any animal she wants to be!"

"When the government refused to allow 3000 child refugees to enter the UK in 2016, Nicola Davies was so angry she wrote a poem. It started a campaign for which artists contributed drawings of chairs, symbolising a seat in a classroom, education, kindness, the hope of a future. The poem has become this book, movingly illustrated by Rebecca Cobb, which should prove a powerful aid for explaining the ongoing refugee crisis to younger readers."

Julian is a Mermaid, by Jessica Love

"While riding the subway home with his Nana one day, Julian notices three women spectacularly dressed up. Their hair billows in brilliant hues, their dresses end in fishtails, and their joy fills the train carriage.

"When Julian gets home, daydreaming of the magic he's seen, all he can think about is dressing up just like the ladies and making his own fabulous mermaid costume. But what will Nana think about the mess he makes - and even more importantly - what will she think about how Julian sees himself?"