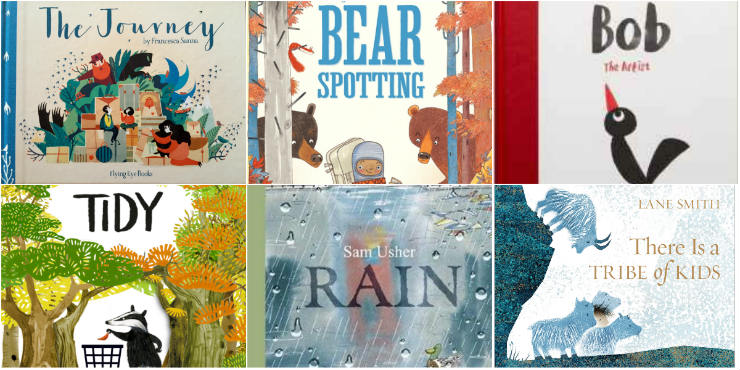 The 2017 CILIP Kate Greenaway Medal longlist has been announced. The prize was established in 1955 and is named after a 19th century artist renowned for her brilliant illustrations and designs for children. It celebrates the best-illustrated children's and Young Adult editions from the past year.

"Alpha Coulibaly is emblematic of the refugee crisis today - just one of millions on the move, at the mercy of people traffickers, endlessly frustrated, endangered and exploited as he attempts to rejoin his family already in Europe.

"With a visa, Alpha's journey would take a matter of hours; without one he is adrift for 18 months. Along the way he meets an unforgettable cast of characters, each one giving another human face to the crisis."

"Aaron Becker, creator of the award-winning Journey and its stunning, celebrated sequel, Quest, presents the final chapter in his luminous, wordless fantasy.

"Failing to get the attention of her busy father, a lonely girl turns back to a fantastic world for friendship and adventure. It's her third journey into the enticing realm of kings and emperors, castles and canals, exotic creatures and enchanting landscapes. But this time, it will take something truly powerful to persuade her to return home."

"From the polar bears of the Arctic to the North American pumas and pandas in Asia, this book takes children on an exciting journey of discovery. The drawings show these animals in all their natural majesty and the witty and charming descriptions will teach children all about their new favourite animals!"

"Bob the bird is just like all his friends, apart from his skinny legs. When Bob is teased, he decides to try and change himself to fit in. But little does he know where all his efforts will lead him."

Jim Field - The Lion Inside (written by Rachel Bright)

"Follow the journey of one little mouse trying to make himself heard and discovering along the way that even the smallest of us has the heart of a lion."

"Perfect tells the story of a young boy who learns to accept that his baby sister has a disability but that she is still perfect in every way. Written from the perspective of the boy, the story is suffused with natural imagery and is an ideal tool for opening up the subject of disability with children."

"Pete the badger likes everything to be neat and tidy at all times, but what starts as the collecting of one fallen leaf escalates quickly and ends with the complete destruction of the forest! Will Pete realise the error of his ways and set things right?"

William Grill - The Wolves of Currumpaw

"The Wolves of Currumpaw is a beautifully illustrated modern retelling of Ernest Thompson Seton's epic wilderness drama Lobo, the King of Currumpaw, originally published in 1898.

"Set in the dying days of the old west, Seton's drama unfolds in the vast planes of New Mexico, at a time when man's relationship with nature was often marked by exploitations and misunderstanding."

"Harry Potter lives in a cupboard under the stairs at his Aunt and Uncle's house. He is bullied by them and his spoilt cousin, and lives a very unremarkable life. But then Harry is transported to a world of magic and excitement."

"There is a legend that a Great Spotted Whale lives in the ocean; local fisherman still talk of it, although the first sighting 50 years ago was never corroborated.

"Now, two young whale watchers each set out to find the whale, one armed with sound recording equipment, the other a camera. Mid-ocean their boats collide, so they pool their resources and set off together to capture incontrovertible proof that the mythical Great Spotted Whale exists."

"Mr Barleycorn picks a green baby growing in his garden, letting loose the incredible power of nature. When courgettes flower in the kitchen and carrots sprout out of their television, his wife tells Mr Barleycorn that the greenling has to go. But the bounty and beauty of nature has a strange power - the power to bring a whole community together.

"Two of the biggest names in children's publishing, Michael Rosen and Chris Riddell, come together in this poetry collection. The poems fizz off the page with sound and rhythm, energy and laughter, as Rosen captures in the most remarkable way what it means to be very, very young."

"Bear spotting is a dangerous business - you ought to take it seriously, you know. So here's what you need to know for starters - black bears are dangerous and black, brown bears are dangerous and brown. Although sometimes black bears can be a little brown, and brown bears can be a little black. Are you following? You really need to focus here. If you do, this guide will tell you all you need to know when walking in bear country. Don't leave home without it. Are you ready? Good! Let's go."

"With haunting echoes of current affairs, this beautifully illustrated book explores the unimaginable decisions made as a family leave their home and everything they know to escape the turmoil and tragedy brought by war."

"In The Marvels, Selznick crafts another remarkable artistic and bookmaking achievement that weaves together two seemingly unrelated stories - one in words, the other in pictures - with spellbinding synergy.

"The illustrated story begins in 1766 with Billy Marvel, the lone survivor of a shipwreck, and charts the adventures of his family of actors over five generations. The prose story opens in 1990 and follows Joseph, who has run away from school to an estranged uncle's puzzling house in London, where he, along with the reader, must piece together many mysteries."

Lane Smith - There is a Tribe of Kids

"Did you ever want to waddle with a colony of penguins? Wriggle with an army of caterpillars? Or march with a troop of monkeys?

"Legendary illustrator Lane Smith takes us on a colourful adventure through the natural world, following a child as he weaves through the jungle, dives under the ocean, and soars into the sky. Along the way he makes friends and causes mischief with a dazzling array of creatures both large and small - but can he find a tribe of his own?"

"Sam wants to go out but it's pouring with rain, so he and Grandpa decide to stay inside until the rain stops. Sam drinks hot chocolate and reads his books and dreams of adventures while Grandpa gets on with his important paperwork. Grandpa seems to have a very important letter to write. Then that very important letter has to be posted, despite the rain and floods. As they finally go outside, Sam and Grandpa have a magical adventure."

"An art-inspired gift that makes learning to name and explore wildlife a family adventure. Larger-than-life charcoal drawings are paired with poetic texts that reveal the ways in which endangered creatures live on Earth, giving little ones the chance to get up close and personal with nature's wildest creatures."

"Big Bear stepped out of her winter den. By her side, half asleep and blinking in the spring sunshine, wobbled a tiny cub. Spring is here and new life is stirring. There is so much for Big Bear to teach her new cub as they step out into the forest. Their journey will take them through summer and autumn and winter, always together, always discovering."

"In 1666, London's citizens woke to see the skyline above their city's cramped wooden houses ablaze. The Great Fire of London is a hauntingly beautiful visual retelling of one of the most well-known disasters in the city's history."