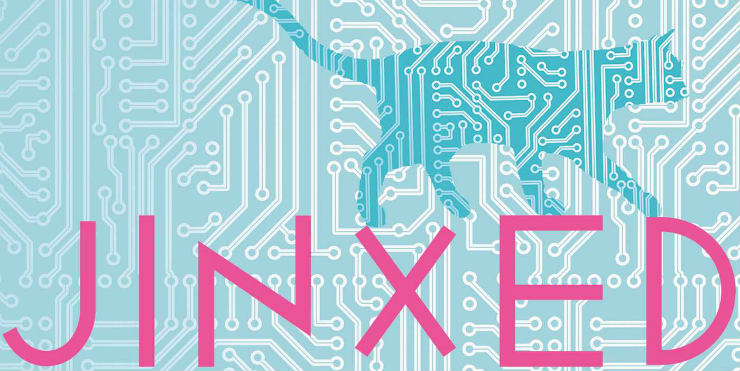 See Jinxed in our catalogue

"Lacey Chu has big dreams of becoming a companioneer for MONCHA, the largest tech firm in North America and the company behind the 'baku' - a customisable smart pet that functions as a phone but makes the perfect companion too.

"When Lacey finds out she hasn't been accepted into Profectus - the elite academy for cutting edge tech - it seems her dreams are over. Worst of all, rather than getting to choose one of the advanced bakus, she's stuck with a rubbish insect one.

"Then, one night, Lacey comes across the remains of an advanced baku. Once it might've been in the shape of a cat but it's now mangled and broken, no sign of electronic life behind its eyes. Days of work later and the baku opens its eyes. Lacey calls him Jinx - and Jinx opens up a world for her that she never even knew existed, including entry to the hallowed halls of Profecus."

If you love futuristic stories with strong young women at the forefront, then Jinxed is the book for you. I went into this book not knowing much, but I was amazed.

From the first page I was sucked into a futuristic world where ‘bakus’ – customisable smart pets - are the 'big thing'. The whole concept of the bakus intrigued me, especially how attached the characters in the book get to them. It made me think about the future of technology in the real world. Could we get to this stage one day?

The plot is quick and easy to follow with many twists and turns. There were times when I was gobsmacked at what had been revealed and this kept me reading on. I was so invested in this world and story that I literally could not put the book down.

Lacey as a character is a joy to read. I adored her ambition to become the best companioneer she could be. It’s also fantastic to see a female character in YA become so invested in STEM. I can certainly see her inspiring many young women to go forward and achieve their dreams in that field.

Jinxed is an addictive, fast-paced, exciting read that brings women in STEM to the forefront. I cannot wait for the sequel.