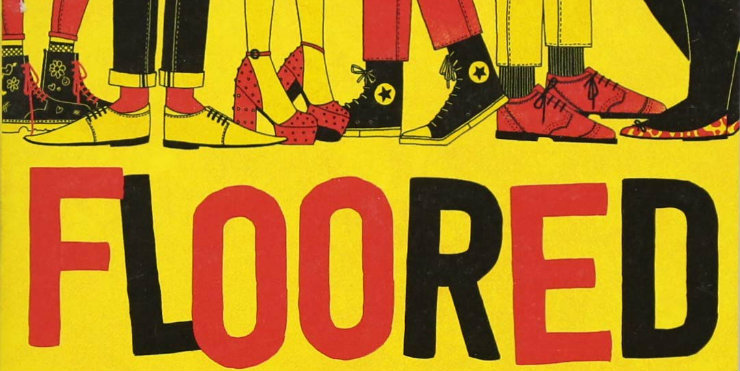 See Floored in our catalogue

"When they got in the lift that morning, they were strangers. Sasha, who is at the UK's biggest TV centre desperately trying to deliver a parcel; Hugo, who knows he's by far the richest - and best-looking - guy in the lift; Velvet, who regrets wearing the world's least comfortable shoes to work experience; Dawson, who isn't the good-looking teen star he was and desperate not to be recognized; Kaitlyn, who's slowly losing her sight but won't admit it, and Joe, who shouldn't be there at all, but who wants to be there the most. And one more person, who will bring them together again on the same day every year."

The concept behind Floored is outstanding. The fact that it is a collaborative project by seven top YA authors and you have to guess which author wrote which character adds a mystical element that entices you in.

The story takes place over several years and because of this, we get to see each character grow from a teen to an adult. We see them follow dreams, learn from their mistakes and become better people overall. This adds a unique twist to the story and makes it lovely to read.

Each character within Floored has a distinctive voice so you know whose narrative you are reading. All the characters have flaws and faults and this makes them all feel so realistic. They grow and learn from their mistakes throughout the story. It was very heartwarming to read and I felt a sense of pride for all six characters come the end of the book.

With a book written by a few authors, sometimes the story doesn't flow or the writing can become a bit choppy, but with Floored this isn't the case. The narrative flows amazingly well and at times it felt like I was just reading a novel written by one author. Everything was so cohesive and I applaud each author - Sara Barnard, Holly Bourne, Tanya Byrne, Non Pratt, Melinda Salisbury, Lisa Williamson and Eleanor Wood - for this.

Floored is a story that I am still thinking about weeks after reading. The characters stick with you and the writing style flows incredibly well. Its unique form of storytelling will have you captivated and wanting more.