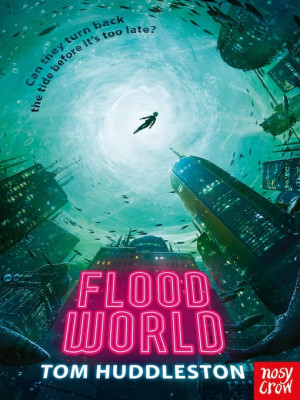 The last bear, by Hannah Gold and Levi Pinfold

There are no polar bears left on Bear Island. At least, that's what April's father tells her when his scientific research takes them to this remote Arctic outpost for six months. But one endless summer night, April meets one. He is starving, lonely and a long way from home. Determined to save him, April begins the most important journey of her life.

This moving story will win the hearts of children the world over and show them that no one is too young or insignificant to make a difference. 'The Last Bear' is a celebration of the love between a child and an animal, a battle cry for our world and an irresistible adventure with a heart as big as a bear's.

Yutu lives in a remote, Arctic village with his elderly grandmother. Their traditional way of life is threatened by the changing snow and ice, which melts faster every year. Bea is trying to adapt to yet another new school. Worse still, her father's new job takes up any spare time, and his behaviour becomes odd and secretive. On a trip she hopes will fix things, their fates take a drastic turn and Bea's life becomes entwined with Yutu's in a way she could never have imagined. Together, they are locked in a desperate race for survival.

City of rust, by Gemma Fowler

Railey dreams of winning the drone races with her bio-robotic gecko friend, Atti. But when a bounty hunter crashes their biggest race yet, the pair are forced to flee to the feared Junker clans who mine the rubbish orbiting the Earth. Rescued by a couple of Junker kids, they discover a danger bigger than anything they'd imagined - but can three kids, a gecko and an ancient computer save the world against the huge trash bomb (and its power-crazed creator) threatening to destroy the world?

In a world that has been ravaged by flooding, Fenn Halflin learns the truth about his past - a secret that forces him to flee the safety of his home as he is chased across the vast sea by the ruthless Terra Firma and their cold-blooded leader, Chilstone. Finding shelter on a decaying island, Fenn is taken in by child survivors in hiding, and he begins a deadly game of cat-and-mouse with the Terra Firma, who will stop at nothing to find him. But as Chilstone's dreaded Fearzero ship appears on the horizon, and the water levels continue to rise, it seems that Fenn's hopes of escape will be washed away for ever.

Queenie stares out at the ocean and dreams of a world beyond her small-town. She's about to get her wish. When the priceless recipe to the world's most popular drink - thought to be lost forever - washes up at her feet, Queenie's life instantly changes. Everyone wants it, and with a $10 million bounty on her head, Queenie's soon on the run. Pursued by bounty hunters, black-ops helicopters and angry mobs, Queenie's journey involves a trip to Area 51, a man-eating alligator and an unlikely new friend, Todd.

But being on the run also makes Queenie begin to see the world around her more clearly - a world in which a big corporation's excess has left the planet covered in its plastic bottles and waste. Suddenly, the home she always dreamed of escaping, and the ocean she grew up with and took for granted, don't seem so bad.

World burn down, by Stephen Cole and Oriol Vidal

Carlos's mother works for IBAMA, Brazil's Environmental Authority. As head of a specially trained task force, her role is to protect the Amazon from the farmers, loggers and miners who are illegally destroying the precious rainforest. It's a dangerous role and when she upsets some of these land-grabbers, they decide to teach her a lesson by kidnapping her son, Carlos. Taken deep into the Amazon, Carlos manages to escape his captors only to find himself trapped by the fast-moving fires. Will he be able to outrun the flames as the world around him burns to the ground?

The last wild, by Piers Torday

Kester is extraordinary, but he doesn't know that yet. All he knows, at this very moment, is that there is a flock of excited pigeons in his bedroom and they are talking to him. His life will never be quite the same again.

Kara and Joe spend their days navigating the perilous waterways of a sunken city, scratching out a living in the ruins. But when they come into possession of a mysterious map, they find themselves in a world of trouble. Suddenly everyone's after them: gangsters, cops and ruthless Mariner pirates in their hi-tech submarines. The two children must find a way to fight back before Floodworld's walls come tumbling down.

Where the world turns wild, by Nicola Penfold

Juniper Greene lives in a walled city from which nature has been banished, following the outbreak of a deadly man-made disease many years earlier. While most people seem content to live in such a cage, she and her little brother Bear have always known about their resistance to the disease, and dream of escaping into the wild. To the one place humans have survived outside of cities. To where their mother is.

When scientists discover that the siblings provide the key to fighting the disease, the pair must flee for their lives. As they cross the barren Buffer Zone and journey into the unknown, Juniper and Bear can only guess at the dangers that lie ahead.

Borrow Where the world turns wild →

In this incredibly moving and powerful story about climate change by one of France's greatest writers for children, the world is run by !ndustry and the only thing that matters is to buy, buy, buy. People live in crowded cities where cars are stacked vertically and shopping centres run miles into the sky. On the day Celeste starts school on the 110th floor of a tower block, she meets a lonely, young boy. The next day she doesn't return. Her blood has become as polluted as the seas and rivers. On a mission to save her, the boy battles the forces of !ndustry and takes her far, far away. Will the world realise the truth of Celeste's disease? Will there be time for her, and the planet, to recover?