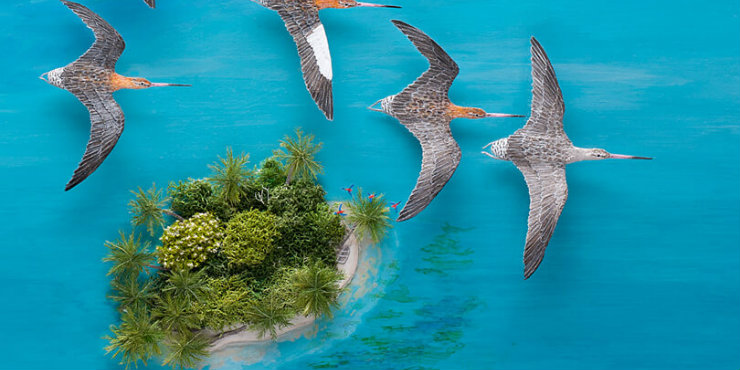 See Circle in our catalogue.

Circle is the latest of Jeanie Baker's stunning picture books aimed at a slightly older audience. It tells the story of a godwit on its annual migration from Australia to Alaska and eventually back again, so completing the circle.

A young boy in a wheelchair has been pushed down to the beach to watch the birds fly away and he is especially aware of one that has white patches on its wings. Seven months later the boy is there again when they, and the white patched godwit, return. Now he has crutches and is able to walk on the beach as his health has improved with the passage of time.

We, as readers, observe the full story of migration as the birds follow 'ancient invisible pathways'. We feel the impact that extensive building has had on their ability to find places to land for rest and food in Southeast Asia and see the relatively unchanged landscape in Alaska where they breed before winter sets in.

All the double page spreads are meticulously collaged. Combining seamlessly with the lyrical text, we are taken on a journey of discovery and wonder at these birds who make 'the longest unbroken journey of any animal in the world'.

My copy of Circle was a gift from a close friend and has a special place on my bookshelf but has made several journeys of its own into schools and meetings to be enjoyed by adults and children.