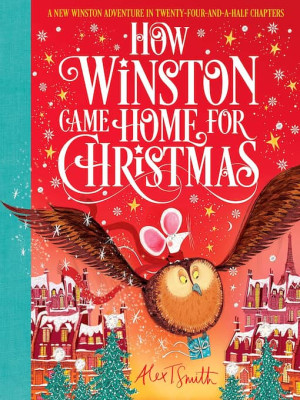 Looking for some festive stories to share with your children? Take a look at our recommended titles for Christmas, filled with magical, heart-warming stories!

Green is for Christmas, by Drew Daywalt and Oliver Jeffers

In this Christmas story starring the crayons from The Day The Crayons Quit, Green Crayon is certain that he is the only Christmas colour in the box. Of course, Red, White, Silver and even Brown have something to say about that. When Green Crayon claims that green is the only colour for Christmas, other crayons let him know that there would be no Christmas without them either. No candy canes or Santa without Red, no snow without White, no bells or stars without Silver and no cookies or reindeer without Brown! The crayons agree that they all need to come together to make Christmas special!

Borrow Green is for Christmas →

Little Santa loves the North Pole. The rest of his family? Not so much. So, when they decide to move to Florida, Santa is miserable. Lucky for him, a blizzard foils their plans. The only way out of the house is up the chimney. Up goes Santa, to look for help, and along the way, he meets a reindeer and a large group of elves, who are more than eager to join in the rescue!

We're going on a present hunt, by Goldie Hawk and Angela Rozelaar

Three children are off on a hunt for the perfect Christmas present! But first they've got to get through the spiky Christmas trees, a herd of hungry reindeer, some noisy carol singers and a very busy toyshop! But there are SO MANY toys - will they ever find the perfect present?

Bring LEGO City to life at Christmas, with mechanisms to push, pull and slide!

Hilda Snibbs takes her three mischievous little monkeys to stay with her Uncle Gilbert for Christmas. Among many amazing things, Uncle Gilbert's prized possession is an ancient golden teapot, so the little monkeys must be very good. But what is supposed to be a traditional holiday is soon filled with chaos! Hilda begins to regret bringing the three little monkeys with her - until, one night, their antics come in very handy.

It's Christmas Eve, and in Santa's workshop all is not well. The elves might be hard at work, but Santa's in a grump, and he's not going to deliver the presents. Disaster! The elves are determined to cheer Santa up with some tuneful songs. Starting with 'Row, Row, Row Your Boat' and moving on to classics such as 'Hang, Hang, Hang Your Socks!' and 'Peel, Peel, Peel the Sprouts!', they belt out musical rhymes to get in a festive mood. But can they get Santa smiling again and into his sleigh on Christmas Eve?

Meet Santa's smallest helper: Tiny Reindeer! He doesn't quite fit in, but when a very special letter arrives before Christmas Eve, he embarks on a mission to find his place in the world. Tiny Reindeer just can't find his place in the busy North Pole. Being much smaller than the other reindeer, he's not very good at any of the jobs Santa gives him. But when a letter comes from a little girl with a Christmas wish to help keep the memory of her grandfather alive, Tiny knows exactly what he needs to do.

The Christmas pine, by Julia Donaldson and Victoria Sandoy

Here is a stunning picture book for Christmas, written in Julia Donaldson's perfect, heartfelt rhyme. Deep in a snowy wood stands a little pine tree with a special destiny: it's going to be the famous Christmas tree in Trafalgar Square! With gorgeous, atmospheric illustrations, this beautiful, moving story brims with festivity and hope.

Come join the Odd Dog on a festive journey to find the perfect present, and perhaps save Christmas along the way. A paw-some story from Rob Biddulph - the genius behind the #DrawWithRob phenomenon and award-winning 'Blown Away'!

Grace and the Christmas angel, by Lucinda Riley and Harry Whittaker

It's Christmas Eve. The tree is decorated, the presents are wrapped and it's a big day for Grace. She is singing a song in the nativity show, and her fisherman daddy has promised to be back in time to watch her. But when a storm blows up at sea, Grace walks out on stage to find Daddy is not there. She's very worried. But luckily, Grace has someone watching over her. Will Hope, the Christmas Angel, be able to help Daddy get home safely for Christmas morning?

Borrow Grace and the Christmas angel →

Shifty and Sam are off to Lapland to bake a festive feast for Santa and his elves. But there's a Christmas crisis - the elves are unwell and can't finish the toys! Does mysterious stranger and gadget queen, Flo Frost, really want to help? Or could she have her eyes on the most magical gadget of all - Santa's flying sleigh?! It's up to Shifty and Sam to race across the snowy slopes and save Christmas for everyone!

How Winston came home for Christmas, by Alex T. Smith

It is five days until Christmas and Winston has a very curious mystery to solve. He has hazy rememberings of another mouse, and he just knows that someone very important to him is lost. After promising Oliver that he will be back in time for Christmas, Winston sets out on an exciting round-the-world adventure to find the missing mouse. A Christmas mystery written in 24-and-a-half-chapters, one to read every day of December in the lead up to Christmas, each chapter includes its very own festive activity for all the family to enjoy together.

The snowman, by Michael Morpurgo and Robin Shaw

When James wakes to see snow falling one December morning, he is delighted and rushes outside to make a snowman. With coal eyes, an old green hat and scarf and a tangerine nose, he is perfect and James can hardly bear to go inside and leave him. In the middle of the night, he wakes and creeps out to see his snowman again - and to his amazement, the snowman comes to life! This new edition contains full-colour illustrations.

A night at the Frost Fair, by Emma Carroll and Sam Usher

It's Christmas-time, and when Maya's grandmother encourages her to go searching for magic, she didn't bet on being transported back three-hundred years to the banks of the frozen river Thames. Meeting a boy called Eddie, he shows Maya the bustle of the glittering Frost Fair, filled with music, sweet stalls, warm fires and thrilling rides. But their connection is stronger than she knew, and when the Frost Fair fades, Maya discovers that her dream may have been real after all.

Borrow A night at the Frost Fair →

Clarice Bean usually looks forward to Christmas. Except this year it is going to be a quiet-ish Christmas in her house, which doesn't feel right because Christmas is all about noisiness and being full up and FAMILY. And without those things, she is going to have to try exceptionordinarily hard to stop the Christmas spirit completely floating away. But luckily, there is no one in the world like Clarice Bean - and she is going to THINK LIKE AN ELF, and that means everything will be A-OKAY. Won't it?

The Christmas Carrolls, by Mel Taylor-Bessent

Wish it could be Christmas every day? Well, for nine-year-old Holly Carroll and her family every day is Christmas Day! The Carrolls are living their merriest lives in a home full of fairy lights and Christmas trees, tinsel and wrapping paper, cinnamon and nutmeg - and a carol-singing toilet. When the family moves house and Holly is going to go to school for the first time, she can't wait to start spreading Christmas cheer through her new class.

But Holly's Santa backpack is getting odd looks from her classmates. And they aren't joining in her loud morning carols. And then even her new friend Archer thinks she should tone down the tinsel. Is the world's most Christmassy girl about to lose her Christmas spirit? A heartwarming, hilarious and inclusive tale about what really matters at this most wonderful time of the year (and featuring a donkey who thinks he's a reindeer).

Diary of a Christmas elf, by Ben Miller

All Tog wants to do is work in Santa's workshop and one wonderful day, the letter from Santa arrives: Tog has been selected as an apprentice elf! Making toys is a lot more technical and a lot less fun than Tog had imagined, and even though his new friend Holly tries to help him, he's quickly relegated to cleaning out the reindeer stables. But someone has been stealing the presents from the workshop and a case of mistaken identity finds Tog accused of being the culprit! Can Tog use his special Christmas magic to discover the real thief and save all the presents before Christmas Eve is over?

Borrow Diary of a Christmas elf →

The Christmasaurus and the naughty list, by Tom Fletcher and Shane Devries

You know about the Naughty and Nice List, right? Santa's top-secret tracker that he ALWAYS checks twice? Well, this year, the Christmasaurus is on a mission to track down children who have found themselves on the Naughty List to help them put wrongs to rights, naughty to nice!