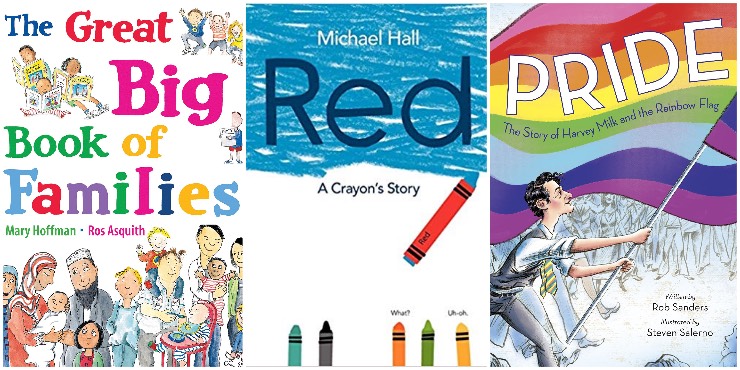 June is Pride Month. We're celebrating with brilliant children's books that promote understanding and acceptance of LGBT+ individuals and families.

Julian is a Mermaid, by Jessica Love

"While riding the subway home with his Nana one day, Julian notices three women spectacularly dressed up. Their hair billows in brilliant hues, their dresses end in fishtails, and their joy fills the train carriage.

"When Julian gets home, daydreaming of the magic he’s seen, all he can think about is dressing up just like the ladies and making his own fabulous mermaid costume. But what will Nana think about the mess he makes - and even more importantly - what will she think about how Julian sees himself?"

"Three-year-old Casey wants what his older sister, Jessie, has - a shimmery skirt, glittery painted nails, and a sparkly bracelet - but Jessie does not approve. After two boys tease Casey about his appearance, Jessie evolves to a place of acceptance and celebration of her gender creative younger brother."

"Based on a true story, this charming and heart-warming tale proves that all you need to make a family is love."

The Boy & the Bindi, by Vivek Shraya & Rajni Perera

"A children's picture book that explores cultural and gender difference, through the eyes of a 5-year-old South Asian boy."

Under the Love Umbrella, by Davina Bell & Allison Colpoys

"Whatever you fear, come close my dear, you're tucked in safe for always here, and I will never not be near. Because of our love umbrella.

"A celebration of the joy and comfort that is always with us, wherever we roam in the big, wild world."

Made By Raffi, by Craig Pomranz & Margaret Chamberlain

"Raffi is a shy boy who doesn't like noisy games and is often teased at school. But when he gets the idea of making a scarf for his dad's birthday he is full of enthusiasm, even though the other children think it is girly to knit.

"Then the day draws near for the school pageant, and there is one big problem - no costume for the prince. And that's when Raffi has his most brilliant idea of all - to make a prince's cape. On the day of the pageant, Raffi's cape is the star of the show."

"What is a family? Once, it was said to be a father, mother, boy, girl, cat and dog living in a house with a garden. But as times have changed, families have changed too. Mary Hoffman takes a look through children’s eyes at the wide varieties of family life, from homes, food and schools to holidays, jobs and housework."

"On a mountain high above town, young Prince Bertie lives with his mother. Tired of being Queen, she is desperate to find Bertie a princess to marry so he can inherit the throne, so she scours the world, from Greenland to Mumbai, looking for a suitable bride but all Bertie says is 'I’ve never cared much for princesses'.

"It seems like the Queen is never going to find a suitable match for Bertie and then Princess Madeleine pays the court a visit, accompanied by her brother, Prince Lee. Has Bertie finally met his match?"

"A blue crayon mistakenly labeled as "red" suffers an identity crisis in this picture book. Funny, insightful, and colourful, Red: A Crayon's Story, is about being true to your inner self and following your own path despite obstacles that may come your way."

"Norman had always been perfectly normal. That was until the day he grew a pair of wings!

"Norman is very surprised to have wings suddenly - and he has the most fun ever trying them out high in the sky. But then he has to go in for dinner. What will his parents think? What will everyone else think?

"Norman feels the safest plan is to cover his wings with a big coat. But hiding the thing that makes you different proves tricky and upsetting. Can Norman ever truly be himself?"

"This work is a beautiful, bold book of biographies celebrating the achievements of LGBT people through history and from around the world."

From Prejudice to Pride: the story of the LGBTQ+ movement, by Amy Lamé

"From Prejudice to Pride looks at the rise and achievements of the LGBTQ+ movement and the different communities, pioneers and stories of heartbreak and courage that have marched alongside it.

"Perfect for readers aged 11 and upwards, this book will inspire courage and pride in young LGBTQ+ people and help answer questions for all readers interested in gender and identity."

Pride: the story of Harvey Milk and the rainbow flag, by Rob Sanders & Steven Salerno

"The very first picture book about the remarkable and inspiring story of the Gay Pride Flag. In this deeply moving and empowering true story, young readers will trace the life of the Gay Pride Flag, from its beginnings in 1978 with social activist Harvey Milk and designer Gilbert Baker to its spanning of the globe and its role in today's world."

What is Gender? How Does It Define Us? And other big questions, by Juno Dawson

"What's the difference between sex and gender? What does it mean to be defined by your gender? Are there only two genders? This informative book helps kids to explore these questions and more, explaining that there are differences of opinion and that answers are not always straightforward. A range of views are on hand from people who have thoughtfully considered the concept of gender in their own lives.

"Aimed at young people aged 10 and upwards, the book encourages readers to think for themselves about the issues involved."