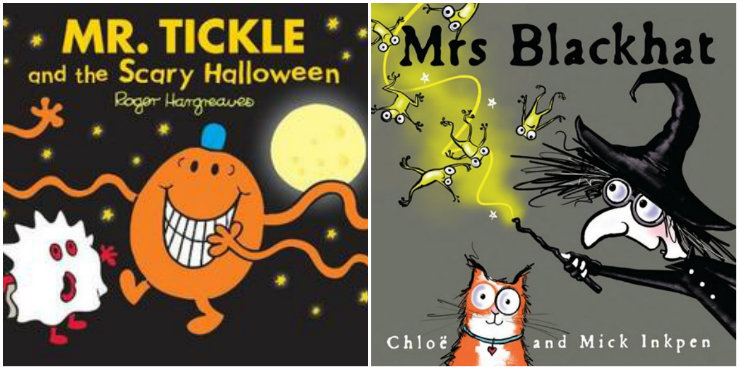 "Children can join in the Halloween fun by pushing, pulling and turning the tabs. Carve a pumpkin, then get dressed up, ready to trick or treat and celebrate at a Halloween party!"

"This sturdy board book introduces simple seasonal words, to get toddlers excited about Halloween. As well as first letter sounds to say out loud, there are bright pictures featuring lots of happy faces, and familiar spooky details to spot and talk about, providing hours of shared first word fun!"

What's in the Witch's Kitchen?, by Nick Sharratt

"The witch has hidden a trick and a treat in her magical kitchen cupboards. Which one you find depends on how you open the doors. Whether it's frogspawn or popcorn, lollipops or rabbit plops there are hilarious rhymes to discover."

"Create your own hilarious spooky fairy tales with this ingenious, split-page, spiral-bound book. Rapunzel has her hair tangled with spiders, while the Three Bears are terrified by Ghostilocks and Beauty dresses up as a Beast! What other funny combinations can you make?"

What Was I Scared Of?, by Dr Seuss

"Then I was deep within the woods when, suddenly, I spied them. I saw a pair of pale green pants with nobody inside them!

"Turn out the lights and say hello to Dr Seuss's spookiest character. The pair of empty trousers, with nobody inside them!"

"This story is about a family of skeletons who spend a night on the town looking for people to haunt and riding on the skeleton animals at the zoo. With rhyming text and plenty of repetition, this book will build confidence in beginner readers."

"Bat's cherries keep going missing. One by one, the precious red cherries are whisked away by mischievous animal tricksters behind Bat's back. Bat fruitlessly tries to catch the culprit and rescue those poor cherries - all to no avail. Will the cherries ever be restored to their rightful owner?"

I Want to be in a Scary Story!, by Sean Taylor & Jean Jullien

We included this in last year's list and couldn't resist featuring it again!

"Monster wants to be in a scary story - but is he brave enough? Scary stories have creepy witches and creaky stairs and dark hallways and spooky shadows. Oh my goodness me! That is very scary. Maybe, a funny story would be better after all?"

A Meg and Mog story.

"Meg's spells continue to surprise her and the eggs she makes for supper are even more strange than usual."

"Winnie and Wilbur decide to explore the mysterious forest that surrounds their home. They want to discover who has been leaving the strange footprints on their lawn. Their foray into the forest is just the start of a wild drama! Winnie and Wilbur need your help to solve the mystery!"

Mr. Tickle and the Scary Halloween, by Adam Hargreaves

"Ever since Little Miss Scary moved to town, Halloween had become really scary. Scare your pants off scary! But Mr. Tickle has a plan to make this year different - a ticklishly, tricky plan! Watch out little Miss Scary, there's someone behind you!"

"Five little pumpkins are sitting quietly on a gate. When night falls and they are joined by a cast of creepy characters - witches, spiders, bats, frogs and ghosts - all determined to cause plenty of Halloween mischief. What a terrific treat!"

How to Mkae Friends with a Ghost, by Rebecca Green

"What do you do when you meet a ghost? One: Provide the ghost with some of its favourite snacks, like mud tarts and earwax truffles. Two: Tell your ghost bedtime stories (ghosts love to be read to). Three: Make sure no one mistakes your ghost for whipped cream or a marshmallow when you aren't looking!

"If you follow the essential tips in How to Make Friends With a Ghost, you'll learn how a ghost can be the perfect companion for the rest of your life and beyond!"

"Over the gate at number 8, round the back, through the flap and onto the lap of Mrs Blackhat! Meet Mrs Blackhat, a witch who just loves the colour black.

"From her broom to her hat, all is black - apart from her cat. What can she do to fix this problem?"

First Prize for the Worst Witch, by Jill Murphy

"Accident-prone Mildred Hubble is the worst witch at Miss Cackle's Academy. She's always getting her spells wrong and landing herself in trouble. But Mildred is now in the last term of 4th Year and determined to prove that she's not as useless as everyone thinks - could it be first prize for the worst witch after all?"

"In these ten delightfully humorous tales of a decidedly blackish hue, ten follysome toads can never change their beastly habits despite the efforts of a goodly witch."

"Have a horror of a Hallowe'en with Horrid Henry's spookiest joke book - full of ghostly gags and fiendish funnies, this is the perfect book for little horrors everywhere!"

Night of the Living Ted, by Barry Hutchison & Lee Cosgrove

"When Lisa Marie and her step-brother Vernon pop into town to get their dad a birthday present, they discover the Create-a-Ted shop is offering free Halloween bears! Making two grisly bears for themselves and choosing an Elvis bear named Bearvis for Dad, they head home.

"That night the shopkeeper brings the bears to life for nefarious purposes, but Vernon's bear, Grizz, doesn't want to be a slave to humans - he wants to rule the world! Converting the shopkeeper's Stuff-U-Lator into a machine for turning living matter into stuffed bears, he begins to prowl the streets. Can the children and Bearvis save themselves - and the world - from being stuffed?"

"Friends Zach, Poppy and Alice love playing with their action figure toys, imagining a magical world of adventure. But when Zach's father throws out all his toys, Zach decides that the only way to cope is to stop being friends with Poppy and Alice.

"But one night the girls tell him about a series of mysterious occurrences. Poppy swears that she is being haunted by a china doll made from the bones of a murdered girl. They must return the doll to where the girl lived, and bury it. Otherwise the three children will be cursed for eternity."

Attack of the Jack-O'-Lanterns, by R. L. Stine

"It's Hallowe'en, and this year that only means one thing for Drew and Walker. Revenge. Revenge for two Hallowe'en's ruined by their enemies, Lee and Tabby. Their plan involves two scary pumpkin heads. But things go wrong!"

Doctor Who: tales of terror, by Rohan Daniel Eason

"A spine-chilling collection of twelve short illustrated adventures packed with terrifying Doctor Who monsters and villains."