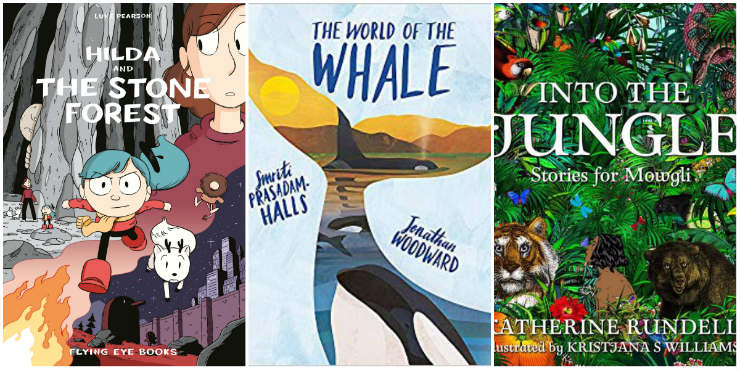 Stock librarian Sophie Green picks out the best children's books of the year and predicts what will be popular in 2019.

With so many brilliant illustrators on the scene and highly illustrated non-fiction going strong, not to mention the enduring success of the Marvel universe, it’s not a surprise that comic books and graphic novels are growing in popularity as more and more children (and adults) discover how amazing they are.

Dog Man: Lord of the Fleas, by Dav Pilkey

Top of our list this year in the hilarious Dog Man series by Dav Pilkey, author of Captain Underpants. Lord of the Fleas is the latest title in the series, and we're also really looking forward to Brawl of the Wild, due out at the end of December.

The Stone Forest, by Luke Pearson

Luke Person's acclaimed comic books have now been adapted for TV. The Stone Forest is the latest title but there is also a novel, Hilda and the Hidden People

Destructo and other ridiculous stories and Looshkin: the adventures of the maddest cat in the world!, by Jamie Smart

Nearly half of our branches are on the circulation list for story comic The Phoenix. These books collect together Jamie Smart's Bunny vs Monkey and Looshkin comic strips from the magazine.

Non-fiction for kids is still exceeding all expectations, and following the phenomenal success of The Lost Words, by Robert MacFarlane and Jackie Morris in 2017, nature writing was especially big in 2018.

A First Book of the Sea, by Nicola Davies & Emily Sutton

This year Nicola Davies became the writer in residence at Booktrust with an agenda to promote nature's extraordinary animals. The First Book of the Sea, an illustrated blend of poetry and non-fiction, follows on from A First Book of Nature and A First Book of Animals.

"This beautifully illustrated picture reference book contains exactly 1000 fascinating things that can be found in our seas and oceans. From crabs on the seashore to deep sea creatures, enormous whales, colourful jellyfish, and even undersea machines, every page is full of things for children to discover."

The World of the Whale, by Smriti Prasadam-Halls

Follow-up to The Ways of the Wolf.

"Graceful and serene, intelligent and social, the whale is a wonder of the deep blue sea. And yet, whales rely on air to breathe - they are mammals, just like us. With breathtaking text, Smriti Prasadam-Halls explores the migrations, songs and family life of these mysterious creatures, revealing astonishing facts you’ve never heard before. Wildlife illustrator Jonathan Woodward brings the marine world to life with stunning papercut collage artwork."

The Big Book of the Blue, by Yuval Zommer

"Why do octopuses have eight arms? Why do crabs run sideways? Are jellyfish made of jelly? Yuval Zommer’s beautiful book provides the answers to these and many more fishy questions. His wonderfully quirky illustrations show off all kinds of slippery, shimmery and surprising sea creatures, including sea turtles, whales, sharks, rays and seahorses."

I Am the Seed that Grew the Tree, by Fiona Waters & Frann Preston-Gannon

"This is an illustrated collection of 366 nature poems - one for every day of the year. Filled with familiar favourites and new discoveries, written by a variety of poets, including William Shakespeare, Emily Dickinson, John Updike, Langston Hughes, N.M. Bodecker, Okamoto Kanoko and many more, this is the perfect book for children (and grown-ups!) to share at the beginning or the end of the day."

Game books are back!

The Gates of Death, by Charlie Higson

Scholastic relaunched the Fighting Fantasy series this year. Other titles in the series include The Shamutanti Hills, by Steve Jackson and Island of the Lizard King, by Ian Livingstone.

The cartoon-based expansion of the iHero - Decide Your Own Destiny series is ideal for reluctant readers.

Escape the Underdark, by Matt Forbeck

The Dungeons & Dragons Endless Quest series has also returned, possibly as a result of the success of Stranger Things.

These are becoming ever more popular. Suffolk children have been tracking down Pokémon, Mickey Mouse, elephants and llamas

2018 has seen the publication of some wonderful classic tales with interactive elements:

My Magical Unicorn, by Yujin Shin

"My Magical Unicorn takes readers on a truly fantastical journey with a beautiful unicorn. With push, pull and turn mechanisms and a sparkly foil cover wheel, little ones will have lots of fun taking part in the unicorn's exciting adventure!

"Weaving a journey from lively beginning to gentle end, the 10 minute countdown to bed is at the heart of this enchanting story. But will Twinkle get to bed on time?"

"When Suzy comes over to Peppa's to play, they have a lot of fun with Peppa's new toy horse, Horsey Twinkle Toes.

"But what they really want to play with is a wonderful, magical, colourful UNICORN!

"Are you a unicorn expert? Then meet Sophie Johnson - you have a lot in common! She's a self-confessed unicorn expert (among other things) and has dressed up her toys and pets with their own unique horns. Strange then, that she doesn't seem to notice the real unicorn who has come into her house."

Many classics were given makeovers, reboots or late sequels this year, making these books perfect Christmas gifts.

The Tales of Beedle the Bard, by J. K. Rowling & Chris Riddell

See The Snowman in our children's book advent calendar →

This new edition has been published just in time for the movie sequel.

Into the Jungle: stories for Mowgli, by Katherine Rundell & Kristjana S. Williams

Origin stories for some of the best-loved characters in The Jungle Book, from the author of The Explorer.

Into the Jungle has been nominated for a Blue Peter Book Award.

The Mystery of the Skull, by Pamela Butchart & Tony Ross

"When Peter discovers an old skull hidden in his bedroom, it's time for an urgent meeting of the Secret Seven. Setting off to investigate, the friends see a gigantic hole in the grounds of a local hotel. Could there be any connection between the two strange events? The Secret Seven are determined to solve the mystery.

"It's time to look behind the green door of the Secret Seven's shed again. Enid Blyton's much-loved detective club are back in a superbly entertaining new adventure."

Digital and CD audiobooks are doing very well in Suffolk this year. Listening to audiobooks is a great way to experience a story both at home and on the go and our digital stock is increasingly popular for long car journeys.

We've had a run on the eAudiobooks of J. K. Rowling's Fantastic Beasts and Where to Find Them, read by Eddie Redmayne, Quidditch Through the Ages, read by Andrew Lincoln and A History of Magic, read by Natalie Dormer.

In branches, J. K. Rowling aside, titles by David Walliams such as The World's Worst Children 3 have been flying off the shelves.