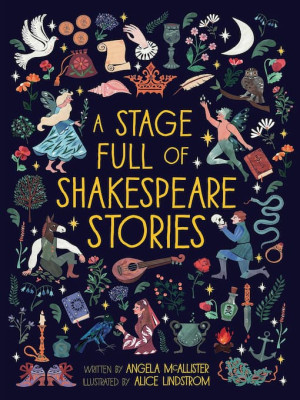 Take a look at some of our favourite re-tellings of Shakespeare's famous plays for children to celebrate Shakespeare Week on 21 - 27 March!

What is Shakespeare Week?

To wee or not to wee!, by Pamela Butchart and Thomas Flintham

'To Wee or Not to Wee!' contains four hilarious retellings of Shakespeare's plays by the Blue Peter Award-winning duo Pamela Butchart and Thomas Flintham.

Borrow To wee or not to wee! →

Shakespeare's plays have been beloved for so many years that his characters and words have shaped our world today. This collection has adapted these works adapted for younger readers, introducing them iconic characters such as Romeo and Juliet, Macbeth and Queen Cleopatra of Egypt. Sam Newman's cleverly reworked text retains many of Shakespeare's own inimitable turns of phrase, while simplifying and clarifying the language to make stories accessible to children.

A midsummer night's dream, by Georghia Ellinas and Jane Ray

William Shakespeare's comedy about four lovers' mishaps in an enchanted forest is unforgettably re-imagined by Shakespeare's Globe as a picture book for very young readers. With detailed illustrations from the acclaimed artist Jane Ray, who has been shortlisted for the Kate Greenaway Medal, this retelling is a magical way to introduce children to one of the best-loved works of the world's greatest playwright.

The tempest, by Georghia Ellinas and Jane Ray

William Shakespeare's dazzling play about magic, revenge and forgiveness is unforgettably re-imagined as a picture book for very young readers. The story is told from the perspective of Ariel in language that is true to the original play but accessible to all. With shimmering illustrations by the acclaimed artist Jane Ray, this retelling is a magical way to introduce children to one of the best-loved works of the world's greatest playwright.

A stage full of Shakespeare stories, by Angela McAllister and Alice Lindstrom

Step on to a stage full of stories with this beautiful anthology of 12 stories from Shakespeare, rewritten to be accessible to children aged 7+. Including favourites such as 'The Tempest', 'A Midsummer Night's Dream', 'Romeo and Juliet', 'Hamlet' and 'Othello', each story is stunningly illustrated by collage artist Alice Lindstrom.

The Usborne complete Shakespeare: stories from all the plays, by Anna Milbourne, Jerome Martin, Megan Cullis and Maria Surducan

An anthology of plays written by one of the greatest dramatists of all time, William Shakespeare. With stories of love, loss, joy and heartbreak, it is perfect for children studying the Bard, or those who simply enjoy reading wonderful stories.

Tales from Shakespeare, by Marcia Williams

This series offers an excellent introduction to Shakespeare for younger readers. The tales have been retold using accessible language and each of the eight plays is vividly brought to life for a whole new audience.

Foolish and bad-tempered, King Lear divides the kingdom between his two wicked daughters, disowns his honest youngest daughter and banishes his friends. As the kingdom falls apart and Lear's humiliation turns him mad, will he finally realise what he has done?

Introducing Shakespeare to the younger reader, this series features many of his best-loved plays, retold with notes on some of the key points.

A great retelling of this tragic tale of jealousy and human frailty. With Notes on Shakespeare and the Globe Theatre, and Jealousy in Othello. The tales have been retold using accessible language and with the help of Tony Ross's engaging black-and-white illustrations, each play is vividly brought to life allowing these culturally enriching stories to be shared with as wide an audience as possible.