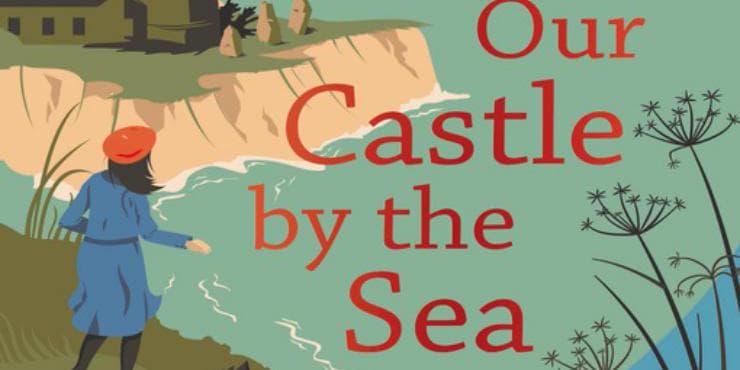 See Our Castle by the Sea on our Overdrive platform

"England is at war. Growing up in a lighthouse, eleven-year old Pet's world has been one of storms, secret tunnels and stories about sea monsters. But now the clifftops are a terrifying battleground, and her family is torn apart..."

Set in a coastal village in Kent during the Second World War, Our Castle by the Sea tells the story of Petra and her experiences during the early years of the conflict. Along with her parents and sister Magda, Petra lives at the local lighthouse - the eponymous 'castle by the sea'. Whilst lighthouses are traditionally symbols of hope for ships looking to reach land, within the context of a world war they are also rather dangerous. The potent blend of hope and fear is central to the events that transpire to alter the lives of Petra and her family forever. Over the course of such events Petra uncovers the layers of mystery that exist within both her family and her own community, whilst all the while enduring various crucial moments of World War Two, including the Twighlight War and the Dunkirk evacuation.

Our Castle by the Sea is stunningly written, peppered with glorious sea imagery. Petra talks of her father's 'ocean-blue eyes' and of her own 'slippery-fish hands', of 'a whole shoal of secrets, writhing in my mind like fish in a net'. The coastal setting, with all its wildness and unpredictability, heightens the sense of precariousness felt by a nation at war. Petra's beloved clifftop 'used to be bright with blossoming gorse, but now it was a grey, thorny wilderness of metal and concrete' and is often hurled around by a 'fierce and blustering wind'. The text is rich with other such vibrant images of the coast and the sea, making for a truly evocative read.

We find ourselves immersed in a small village community, defined by traditional hierarchies and annual events, and dominated by figures such as ARP wardens and local oddities. But as the war presses on it is made clear that war and other uncertainties gnaw away at communities; their actual fragility hidden beneath a wholesome facade is revealed. As suspicion inflates and prejudice simmers, the locals - previously so close knit- start to reject any outsiders. Sadly Petra and Magda suffer this first hand. They learn the hard way that trustworthiness is based on much more than simply how a person seems and that, more often than not, further digging is required. Yet, whilst they suffer sad losses, they do discover substitutes in unexpected places.

I particularly revelled in the depiction of a good-hearted, unsure and, in short, thoroughly realistic child: in Petra we are not assailed by the bold and brave actions of a perfect, unmatchable hero. In frightening situations she freezes to the spot, paralysed with dread, as she is plagued by visions of The Wyrm, a legendary sand bank concealed in the cliffs responsible for luring ships to their doom. Such incidents of real danger, such as air-raids, a fire in the village and a risky boat trip provoke similar behaviour. Petra's anxiety pursues her, chewing away at her confidence and feeding her fears. As we accompany her through these extraordinary years of her life, and through immense hardships, we see her take risks, succeed, falter and change. Her fortitude is, in the end, of much greater significance than the quick flashes of brilliance attempted by those who surround her.

Petra's voyage of discovery creates a tantalising narrative with constant twists and turns in the plotline, leaving the reader enthralled from start to end. Lucy Strange also encourages her audience to deepen their perceptions - we learn to understand that adults are not infallible and can do the wrong thing for the right reasons and vice versa. The overarching emphasis on forgiveness of others and of oneself is also prevalent. Both themes make for an important message to impress upon young readers: Petra's story emphasises the need to remain compassionate in difficult times, making it clear that kindness always wins in the end.