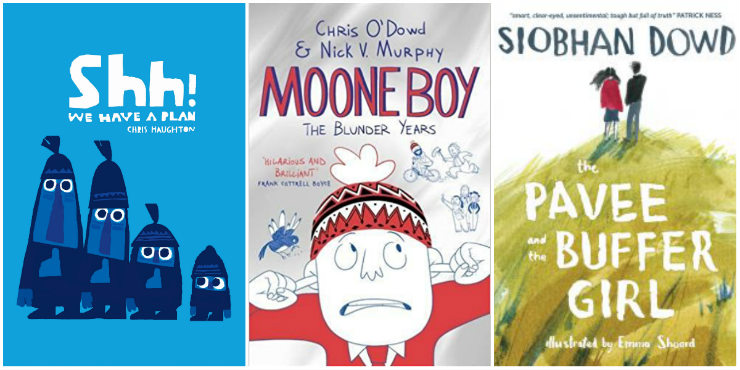 17 March is St Patrick's Day. Why not mark the occasion by picking up a brilliant children's book by an Irish author or illustrator?

Goodnight Everyone, by Chris Haughton

"'Dear me', says Great Big Bear, 'it must be time for bed!'. But Little Bear is certainly not sleepy - he's wide awake!"

Shh! We Have a Plan, by Chris Haughton

"Four friends, three big and one little, are out for a walk. Suddenly, they spot it - a beautiful bird perched high in a tree! They simply must have it and - shh! - they have a plan."

Lost and Found, by Oliver Jeffers

"A story about the meaning of loneliness and the importance of friendship. When a penguin arrives on a boy's doorstep, he decides it must be lost and he tries to return him home to the South Pole."

Once Upon an Alphabet, by Oliver Jeffers

"The letters of our alphabet work tirelessly to make words that in turn make stories, but what if there was a story for each of the letters instead? Turn the pages of this book to find out. Here you will discover twenty-six short stories introducing a host of new characters (plus the occasional familiar face)."

The Fish in the Bathtub, by Eoin Colfer & Peter Bailey

"Little Lucja's Grandpa Feliks has seen off the German army, and the Communists, and now he is looking forward to a long and peaceful retirement. He plans to begin with a tasty Christmas Eve dinner of carp. But when the carp arrives alive and takes up residence in the bathtub and Lucja's heart, has Grandpa Feliks finally met his match?"

"Mary loathes her big, curly, bushy hair and so she chops it all off - and she looks fantastic! Well, at least she thinks so. But her mammy is not convinced and forbids her from ever cutting her own hair again. But she didn't say anything about anyone else."

Stay Where You Are and then Leave, by John Boyne

"The day the First World War broke out, Alfie Summerfield's father promised he wouldn't go away to fight - but he broke that promise the following day. Four years later, Alfie doesn't know where his father might be, other than that he's away on a special, secret mission. Then, while shining shoes at King's Cross Station, Alfie unexpectedly sees his father's name - on a sheaf of papers belonging to a military doctor. Bewildered and confused, Alfie realises his father is in a hospital close by - a hospital treating soldiers with an unusual condition."

"12-year-old villain Artemis Fowl is the most ingenious criminal mastermind in history. His bold and daring plan is to hold a leprechaun to ransom. But he's taking on more than he bargained for when he kidnaps Captain Holly Short of the LEPrecon (Lower Elements Police Reconnaissance Unit)."

First in a series of eight.

Rover and the Big Fat Baby, by Roddy Doyle

"It's the summer holidays and Rover is busy searching for poo. He works for The Gigglers, small furry creatures who make sure grown-ups are nice to their kids. If they aren't, they get the Giggler Treatment - a smelly, squishy present on the end of their shoe, which is where Rover comes in. But Rover and his nephew Messi (who is actually very tidy) are distracted from their job by a Big Fat Baby (B.F.B) who's fallen out of her Granny's backpack."

"When Ted and Kat watched their cousin Salim get on board the London Eye, he turned and waved before getting on. But after half an hour it landed and everyone trooped off - but no Salim. Where could he have gone? How on earth could he have disappeared into thin air?"

"Martin Moone is fed up with being the only boy in a family of girls. With three elder sisters, he's desperate for a sidekick to help him fight his corner. When best mate Padraic suggests getting an imaginary friend, he decides to give it a go.

"His first attempt is Loopy Lou, who loves practical jokes and is a dab hand at balloon-modelling. But Martin soon gets fed up with Lou's clowning around, so selects Sean 'Caution' Murphy instead. Sean is much more up Martin's street - and full of advice about how Martin should negotiate day-to-day life. But getting rid of Lou is not easy, and TWO imaginary friends is a recipe for trouble!"

"Martin's parents are strapped for cash: it's going to be a budget Christmas this year. So Martin plans to buy his own presents - and attempts, unsuccessfully, to get a job. Padraic puts in a word for him with his Auntie Bridget, who runs the local butcher's shop. But her shop is struggling as the fish shop across the road undercuts her and Bridget just can't compete. No one knows how the owner, Francie Feeley, does it - especially since he doesn't seem to employ anyone at his fish factory. No one goes in; no one goes out - it's a mystery. Intrigued, Martin decides to go undercover and find out the truth."

The Boy in the Striped Pyjamas, by John Boyne

"Nine-year-old Bruno knows nothing of the Final Solution and the Holocaust. He is oblivious to the appalling cruelties being inflicted on the people of Europe by his country. All he knows is that he has been moved from a comfortable home in Berlin to a house in a desolate area where there is nothing to do and no one to play with. Until he meets Shmuel, a boy who lives a strange parallel existence on the other side of the adjoining wire fence and who, like the other people there, wears a uniform of striped pyjamas.

"Bruno's friendship with Shmuel will take him from innocence to revelation. And in exploring what he is unwittingly a part of, he will inevitably become subsumed by the terrible process."

The Boy at the Top of the Mountain, by John Boyne

"When Pierrot becomes an orphan, he must leave his home in Paris for a new life with his Aunt Beatrix, a servant in a wealthy household at the top of the German mountains. But this is no ordinary time, for it is 1935 and the Second World War is fast approaching; and this is no ordinary house, for this is the Berghof, the home of Adolf Hitler. Quickly, Pierrot is taken under Hitler's wing, and is thrown into an increasingly dangerous new world: a world of terror, secrets and betrayal, from which he may never be able to escape."

The Reluctant Assassin, by Eoin Colfer

"The reluctant assassin is Riley, a Victorian boy who is suddenly plucked from his own time and whisked into the 21st century, accused of murder and on the run. Riley has been pulled into the FBI's covert W.A.R.P. operation (Witness Anonymous Relocation Program). He and young FBI Agent Chevie Savano are forced to flee terrifying assassin-for-hire Albert Garrick, who pursues Riley through time and will not stop until he has hunted him down. Barely staying one step ahead, Riley and Chevie must stay alive and stop Garrick returning to his own time with knowledge and power that could change the world forever."

Apple and Rain, by Sarah Crossan

"When Apple's mother returns after eleven years of absence, Apple feels whole again. She will have an answer to her burning question - why did you go? And she will have someone who understands what it means to be a teenager - unlike Nana. But just like the stormy Christmas Eve when she left, her mother's homecoming is bittersweet, and Apple wonders who is really looking after whom. It's only when Apple meets someone more lost than she is that she begins to see things as they really are."

"Armed with a suitcase and an old laundry bag filled with clothes, Kasienka and her mother leave Poland and head for the UK to find her father. Life is lonely for Kasienka. At home her mother's heart is breaking and at school Kasienka finds it impossible to make new friends."

"Digging for peat in the mountain with his Uncle Tally, Fergus finds the body of a child, and it looks like she's been murdered. As Fergus tries to make sense of the mad world around him, a little voice comes to him in his dreams, and the mystery of the bog child unfurls."

"Jim and his family have halted by Dundray and the education people have been round mouthing the law. In school the Traveller kids suffer at the hands of teachers and other pupils alike, called 'tinker-stinkers', 'dirty gyps' and worse. Then the punches start. The only friendly face is Kit, a settle girl who takes Jim under her wing and teaches him to read in the great cathedral chamber in the cave below the town."

Solace of the Road, by Siobhan Dowd

"Holly Hogan hates her foster family with their too-nice ways and their false sympathy. And she hates her life, her stupid school and the way everyone is always on at her. Then she finds the wig, and everything changes. Wearing the long, flowing blonde locks she feels transformed. She's not Holly any more, she's Solace."

A Greyhound of a Girl, by Roddy Doyle

"12-year-old Mary's beloved grandmother is near the end of her life. Letting go is hard - until Granny's long-dead mammy appears at Mary's door, returning to help her dying daughter say goodbye. But first she needs someone to drive them all on a visit to the past."

"Stephanie's uncle Gordon is a writer of horror fiction. But when he dies and leaves her his estate, Stephanie learns that while he may have written horror, it certainly wasn't fiction. Pursued by evil forces intent on recovering a mysterious key, Stephanie finds help from an unusual source - the wisecracking skeleton of a dead wizard."

The first of nine books in the first Skulduggery Pleasant series.