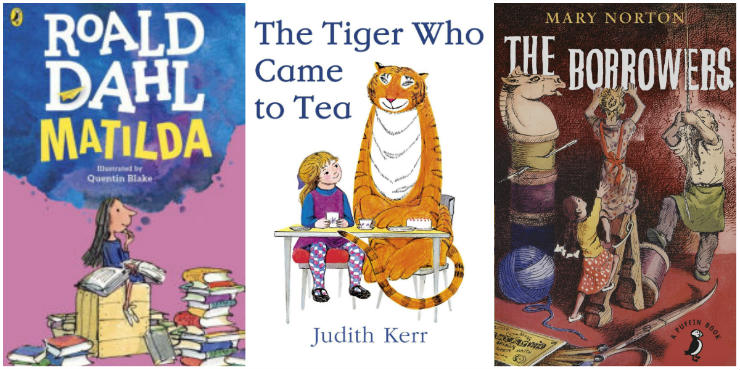 A poll commissioned by the CILIP Carnegie and Kate Greenaway Medals has revealed the UK's favourite books from the past 80 years. These are 15 books published between 1936 and 1997 that parents especially loved as children and have in turn read to their children, or encouraged them to read themselves.

The list is dominated by Roald Dahl, who takes the top three places. The oldest entry on the list is The Hobbit, by J. R. R. Tolkein and the newest is Harry Potter and the Philosopher's Stone, by J. K. Rowling.

1. Charlie and the Chocolate Factory by Roald Dahl (1964)

"Charlie Bucket can't believe his luck when he finds a Golden Ticket and wins the chance of a lifetime: a magical day witnessing the miraculous creation of the most delectable eatables ever made."

"Giants are known for eating children. So when Sophie is snatched from her bed by the BFG, she fears for her life. But luckily he is far more jumbly than his disgusting neighbours. They become good friends and cook up a plan to rid the world of bad giants."

"Matilda's parents have called her some terrible things. The truth is, she's a genius and they're the stupid ones. Find out how she gets the better of them and her spiteful headmistress, as well as discovering that she has a very special power."

": Paddington Bear had travelled all the way from darkest Peru when the Brown family first met him on the platform at Paddington station. Since then their lives have never been quite the same, for ordinary things become quite extraordinary when a bear called Paddington is involved."

"A much-loved classic, The Very Hungry Caterpillar has won over millions of readers with its vivid and colourful collage illustrations and its deceptively simply, hopeful story. With its die-cut pages and finger-sized holes to explore, this is a richly satisfying book for children."

"Harry Potter lives in a cupboard under the stairs at his Aunt and Uncle's house. He is bullied by them and his spoilt cousin, and lives a very unremarkable life. But then Harry is transported to a world of magic and excitement."

"In this children's classic, Lucy finds that an old wardrobe in a professor's country house is a gateway to a magical land of fauns, centaurs, nymphs and talking animals - but also of the beautiful but evil White Witch who has held the land of Narnia in eternal winter for a hundred years."

"This is the tale of how a little girl named Fern, with the help of a friendly spider, saved her pig, Wilbur, from the usual fate of nice fat little pigs."

"When the Cat in the Hat steps in on the mat, Sally and her brother are in for a roller-coaster ride of havoc and mayhem! By combining the funniest stories, craziest creatures and zaniest pictures with his unique blend of rhyme, rhythm and repetition, Dr Seuss helps children of all ages and abilities learn to read."

"The Hobbit is a tale of high adventure, undertaken by a company of dwarves in search of dragon-guarded gold. A reluctant partner in this perilous quest is Bilbo Baggins, a comfort-loving unambitious hobbit, who surprises even himself by his resourcefulness and skill as a burglar.

"Encounters with trolls, goblins, dwarves, elves and giant spiders, conversations with the dragon, Smaug, and a rather unwilling presence at the Battle of Five Armies are just some of the adventures that befall Bilbo."

"'I wrote to the zoo to send me a pet'. This classic lift-the-flap book has been a favourite with toddlers ever since it was first published in 1982."

"The doorbell rings just as Sophie and her mummy are sitting down to tea. Who could it possibly be? What they certainly don't expect to see at the door is a big furry, stripy tiger!"

"This classic picture book describes the friendship between a boy and a snowman and their magical journey over a sparkling winter landscape."

"The Borrowers have lived in the secret places of quiet old houses; behind the mantelpiece, inside the harpsichord, under the kitchen clock. They owned nothing, borrowed everything, and thought human beings were invented just for their use. Until one of the Borrowers made friends with a human."

"Father Christmas awoke from his dream of summer in the sun, and there is was on the calendar, December 24th, Christmas Eve - the start of his longest night's work of the year!"