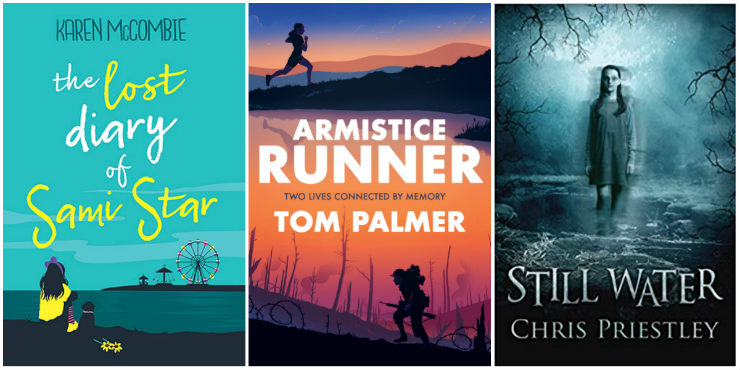 "Ant isn't like many other boys. His clothes are always dirty, there are often bugs in his hair and he doesn't even know about footie!

"But what's hiding behind his ginormous green sunglasses, well that has to be seen to be believed."

"When Captain Beardy-Beard rescues Nellie from the North Pole she's ready to be safe and sound back at home. But mistakes and trouble are never far from Nellie, and when their submarine runs out of fuel in the docks of New York, Captain Beardy-Beard and his crew are a prime target for hijacking!"

"Leroy Jones is a very ordinary boy blessed with a truly ridiculous name - one that he is determined to keep hidden from everyone.

"But when he is paired with the bossy Amy Strundle for a project, she's set to be a thorn in his side and wants everyone to know his secret. Can Leroy find a way to get his revenge?"

The Lost Diary of Sami Star, by Karen McCombie

"Being at home is hard for Hannah. With Mum, Dad and Vix always fighting they've got no time for her or her worries, she might as well be invisible.

"But when she finds an abandoned diary in the park containing snippets and photographs of the colourful life of the mysterious Sami Star, Hannah hopes she's found the real friend she always needed. Little does Hannah know Sami needs her too."

"Matthew Henson was simply an ordinary man. That was, until Commander Robert E. Peary entered his life, and offered him a chance at true adventure. Henson would become navigator, craftsman, translator, and right-hand man on a treacherous journey to the North Pole, defying the odds and the many prejudices that faced him to become a true pioneer. This is his incredible and often untold story."

"When Rosie is evacuated from bomb-torn London, there's hope that her life in the country will bring her at least a little happiness. But all is not as it seems in her new family and while Mary resents and bullies her, Mrs Taylor tries to hide a dark and terrible secret that has haunted her for years. W

"When Rosie thinks she's finally found friendship in a new stranger, the mysterious girl leads to a horrifying truth that will change their lives forever."

"Running is what Lily is good at, and fell-running is what she loves. But what Lily doesn't realise is that this talent was inherited from someone very important - her great-great-grandfather Ernest, an unsung hero of the First World War.

"When Lily's gran passes on to her Ernest's diaries, Lily learns of his experiences in the trenches, and their stories intertwine."

"Sam has sickle-cell anaemia and, though things can be hard when his illness flares up, Mum and Dad seem convinced that he's never well enough to do anything fun. All he wants is the chance to have a normal life like his friends, and that includes going on an exciting school trip to the Scottish Highlands.

"When Mum and Dad finally agree, Sam hopes the trip can be his chance to prove how strong he is. Unfortunately, his bullies have other ideas and the trip might turn out to be more dangerous than Shaun ever imagined."

"Nastia is no traitor. She is a daring pilot, the daughter of revolutionaries, and now, as the Second World War descents on Russia, she must fight to save the glorious Motherland. But all is not as it seems, and when the battles begin, secrets are revealed and everything that she once knew is challenged."

"Aman's dad is gone, leaving her feeling lost and alone. She struggles to talk about it, but it's a fact and he isn't coming back. When a lovely man called Gurnam moves onto her street and saves Aman from some local bullies, he and Aman quickly become friends, perhaps even like family.

"But Gurnam has his own sadness. One that's far bigger than Aman can understand, and it's tearing his life apart."

"Ruby has had a lot of foster siblings over the years, but none of them have been anything like Clara. After growing up in almost complete isolation, Clara is distraught at being separated from her mother and overwhelmed by a world she doesn't understand.

"But the more Ruby tries to help Clara fit in, the more she realises she has to face up to some struggles of her own."

"Life on the Crongton estate can be rough for Briggy. Dad's lost his job, Mum's working so hard to make ends meet, and big brother Kingsley just wants out. With all of the shouting and arguing it's difficult not to get lost in the mix.

"So when his best mate Terror and coolest chick in the year Caldonia, cook up a plan to make a quick buck, Briggy hopes this time it might be his chance to shine. Robbing the Post Office - what could go wrong?"