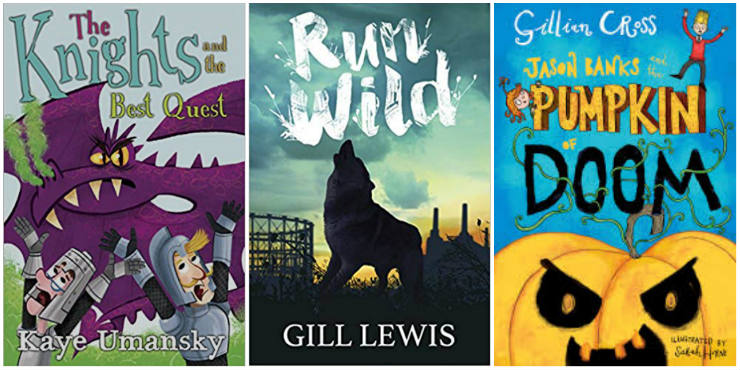 Barrington Stoke, who specialise in books for children with dyslexia and visual stress, have published some more brilliant titles recently.

"Splish, splosh, splash! It's Splash Day and everyone is ready for a water fight! They've got their trunks and wetsuits, some wellies and rubber rings, and Mrs Rose even has a great big hose!"

The Knights and the Best Quest, by Kaye Umansky & Ben Whitehouse

"What's the point of a daring quest without a little competition? The Knights of the Drop-Leaf Table don't think there is one, so it's time to draw up the rules, find a suitable prize, hit the road on their less-than-trusty steeds and prove who's best! Can they return laden with magic amulets, damsels in distress and dragon's heads? Or is the draw of one of Mrs Spunge's delectable sandwiches far too tempting?"

Norman the Norman and the Very Small Duchess, by Philip Ardagh & Tom Morgan-Jones

"Norman the Norman is at it again! And this time the Duchess of Normandy is determined that her William should have little Norman helping with his 'Conquest thingy'. After all he is Normandy's bravest broadsword swinging hero!

"But can Norman even make it to the boat on time? Or are there other adventures to be had with robbers, giants, a messenger called Barry, and Matilda the very small Duchess?"

Mariella, Queen of the Skies, by Eoin Colfer & Katy Halford

"Mariella loves nothing more than inventing but the bedtime keeps getting in the way of all her brilliant ideas! So when Mum and Dad won't take no for an answer there's only one thing for it - Mariella has to build a rocket-powered flying suit to zap her round the world faster than the setting sun!

"If anyone can outsmart sleep it's Mariella. But everyone needs sleep and without it all of Mariella's brilliant ideas might just disappear."

"Bella has a secret, which one day she shows her friend. It's a den, and one night they see a fox and her cubs. When Bella's friend blurts out she's seen the foxes, the local farmer overhears. He wants to shoot them, and Bella is furious."

Back on Weird Street, by Anne Fine & Vicki Gausden

"Asim, Laila and Tom like nothing more than spooking each other out with tales of the unexpected. This summer they're back with three more stories to chill you to the bone. Can your dreams really grant you fortunes and riches? What lurks in the shadows of Number 17?"

Houdini and the Five-cent Circus, by Keith Gray

"The year is 1885 and Erik Weisz, a penniless immigrant, has found himself in trouble again. His uncanny talent for picking locks and his gleeful showboating to match it have earned him very few friends and a bad reputation.

"But this is just the beginning of his story and Erik is destined for a far more magical future. Watch as he transforms before your very eyes into the greatest showman the world has ever seen."

Jason Banks and the Pumpkin of Doom, by Gillain Cross & Sarah Horne

"Jason Banks is a bully. No one likes him and even the teachers are scared of him! It's time that someone taught Jason a lesson and he might just have met his match in the strange pumpkin that keeps appearing on his doorstep. Will Jason ever learn the error of his ways? And can he crack the case of the dreaded Pumpkin of Doom?"

"Grandma Gertie is rather strange. With her big square glasses and a parrot on her hat, Anna and Kasper don't know what to make of her. But Grandma's got a secret. Grandpa Bert is a ghost and he's travelled all the way from Barbados squished inside her handbag! Even worse, they're being followed and Grandpa Bert could be in very grave danger. Can Anna and Kasper help their grandparents before it's too late?"

"Izzy and Asha need a space to call their own, away from difficult families, the Skull brothers and the trouble they bring. But the derelict building site where they stake their claim already belongs to something else, a wilderness they never expected and an injured wolf that desperately needs their help. Can they reconnect to the wild and save the wolf? Or is their pack too weak to fight much stronger powers?"

The Tiger on his Back, by Bernard Ashley

"Sofia Drake wants a tattoo - a tattoo all of her own, where her parents won't see it. And when she's introduced to Sol Marks, a genius young tattooist, Sofia falls in love with his arty, original designs. But when Sofia's dad sees his daughter's new body art his reaction sets in motion a series of events no one could have anticipated."