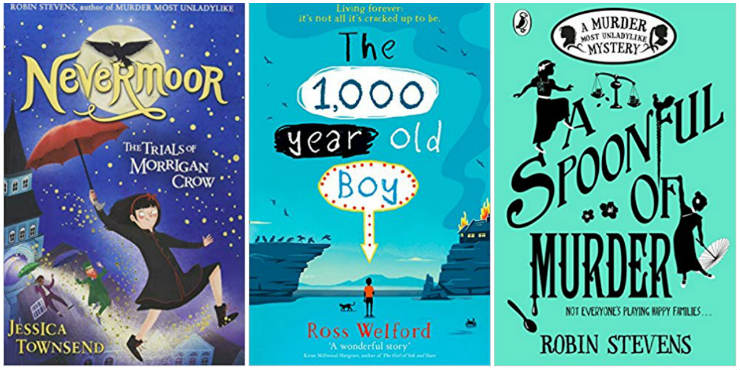 The Books Are My Bag Readers Awards are curated by bookshops and voted for by book lovers. Young book fans are invited to vote for their favourite for the chance to win a £100 book token, so why not check out the middle grade shortlist today?

Nevermoor: the trials of Morrigan Crow, by Jessica Townsend

"Morrigan Crow is cursed. Having been born on Eventide, the unluckiest day for any child to be born, she's blamed for all local misfortunes, from hailstorms to heart attacks - and, worst of all, the curse means that Morrigan is doomed to die at midnight on her eleventh birthday.

"But as Morrigan awaits her fate, a strange and remarkable man named Jupiter North appears. Chased by black-smoke hounds and shadowy hunters on horseback, he whisks her away into the safety of a secret, magical city called Nevermoor. It's then that Morrigan discovers Jupiter has chosen her to contend for a place in the city's most prestigious organisation: the Wundrous Society.

"Alfie Monk is like any other nearly teenage boy - except he’s 1,000 years old and can remember the last Viking invasion of England. Obviously no one believes him, so when everything Alfie knows and loves is destroyed in a fire, and the modern world comes crashing in, he embarks on a mission to find friendship, acceptance, and a different way to live - which means finding a way to make sure he will eventually die."

A Spoonful of Murder, by Robin Stevens

"When Hazel Wong's beloved grandfather passes away, Daisy Wells is all too happy to accompany her friend (and Detective Society Vice President) to Hazel's family estate in beautiful, bustling Hong Kong.

"But when they arrive they discover something they didn't expect: there's a new member of the Wong family. Daisy and Hazel think baby Teddy is enough to deal with, but as always the girls are never far from a mystery. Tragedy strikes very close to home, and this time Hazel isn't just the detective. She's been framed for murder!

"The girls must work together like never before, confronting dangerous gangs, mysterious suspects and sinister private detectives to solve the murder and clear Hazel's name - before it's too late."

Brightstorm: high adventure in the frozen south, by Vashti Hardy

"Twins Arthur and Maudie receive word that their father died in a failed attempt to reach South Polaris. But a mysterious clue leads the twins to question the story they’ve been told, and they join the crew of a new exploration attempt in the hope of learning the truth. Will Arthur and Maudie find the answers they seek?"

"Fionn Boyle and his older sister Tara have been sent to stay with their grandfather on the remote island of Arranmore for the summer. Though Fionn has never met his grandfather before - an eccentric old man who lives in a tiny cottage filled to the brim with candles - he knows he comes from a long line of brave lifeboat men, who wear the sea behind their eyes.

"Fionn is scared of the sea. He has no interest in adventure or shipwrecks or the restless wind that rustles through the island, as though in search of something. But an old magic is stirring deep inside the layers of Arranmore, and it is calling out to Fionn."