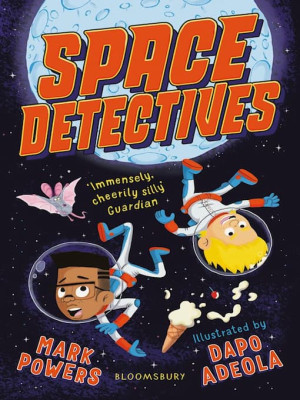 Are you sick of being utterly adorable? Tired of being cuddled and hugged? Fed up of having your head confused for your bottom because you just so happen to be SOOOOPER-DOOOOOPER fluffy? If you answered yes to any of those questions, then you're in the right book. Everyone thinks that Lin is the cutest panda in the world. So much so that they ship her off to the local zoo, away from her beloved brother, to be ogled at by the masses. But Lin HATES being cute, and now she will do everything in her power to prove that she's the baddest, meanest, most un-cute animal in the zoo.

Indigo Wilde and the Creatures at Jellybean Crescent, written and illustrated by Pippa Curnick

Discovered in the Unknown Wilderness when she was just a baby, Indigo Wilde was adopted by World-Famous Explorers, Philomena and Bertram, who are always off adventuring. Home for Indigo and her little brother, Quigley, is 47 Jellybean Crescent, a crazy and colourful house full of magical creatures that her parents have taken in over the years. There's Fishkins, a purrmaid - half-cat, half-fish, and ALWAYS grumpy; Graham, a llama-corn with a particular taste for tinsel; Olli and Umpf - bright pink and blue yetis who can't blend in to the snow, and that's to name just a few of the creatures.

And now Indigo's parents have sent another Monster Mail delivery to Indigo and Quigley. But this time, the box is empty, and the escaped creature is running rampage around the house. The race is on to catch the creature before it's too late.

Borrow Indigo Wilde and the Creatures at Jellybean Crescent →

Kate on the Case, written and illustrated by Hannah Peck

Young reporter-in-training Kate and her mouse-accomplice Rupert are on board a train, to visit Kate's mum in the Arctic. But as soon as the train departs, mysterious things start happening.

Borrow Kate on the Case →

Dog lost in space? Grown an extra head and don't know why? Pocket money stolen by a green blob? You need the Space Detectives! Connor and Ethan are spending their summer holidays aboard the world's first orbiting city, Starville (basically Beverley Hills in space!). The amazing space station is bursting with celebrities and the mega-rich. But Connor and Ethan are too busy selling ice cream to see the sights. However, neither of our heroes can resist a mystery and when they discover the space station is hurtling on a collision course with the moon (eep!) they know they need to step in. This is a case for the Space Detectives! Can Connor and Ethan find the culprit and save Starville from its impending doom?

The Girl Who Talked to Trees, written by Natasha Farrant and illustrated by Lydia Corry

Trees are storykeepers, witnesses to magic and history. From far away, a girl tumbles like a leaf into our world. She makes a promise, discovers the secrets of an ancient oak, and rescues a boy from a medieval hunt. She learns how wild apple blossom is linked to three runaway brides, and hears about the revenge of an overclipped box tree. From the underground roots to the uppermost branches, from plane trees in Persia, to tulip trees in North America and underwater kelp forests, she listens to the trees telling stories for all time. And she keeps her promise.

With a conservation message and facts about tree science alongside the magic and beauty of seven beautifully imagined original stories, this full colour, gift book enchants and reminds us of the importance of trees in our lives.

Borrow The Girl Who Talked to Trees →