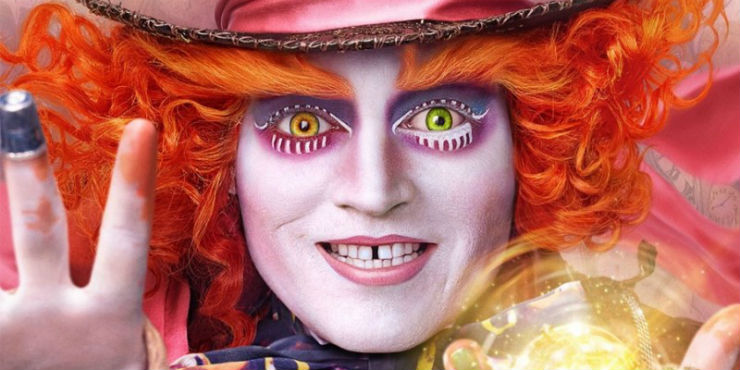 The new Alice Through the Looking Glass film, released by Walt Disney Pictures on May 27 2016, is based on Through the Looking-Glass by Lewis Carroll and is the sequel to the 2010 film Alice in Wonderland. The film stars Johnny Depp, Anne Hathaway, Mia Wasikowska, Rhys Ifans, Helena Bonham Carter, and Sacha Baron Cohen and features the voices of Alan Rickman, Stephen Fry, Michael Sheen, and Timothy Spall. In honour of the latest film, here are some Alice related books and DVDs to investigate.

The story of Alice: Lewis Carroll and the secret history of Wonderland by Robert Douglas-Fairhurst

The author, an Oxford don, draws on previously unpublished material.

This work illuminates the tangled history of two lives and two books, examining the peculiar friendship between Oxford mathematician Charles Dodgson, Lewis Carroll, and Alice Liddell, the child for whom he invented the Alice stories. It analyses how their relationship influenced the creation of Wonderland, how the two Alice books took on an unstoppable cultural momentum in the Victorian era, and why 150 years later they continue to enthrall and delight us.

The story of Alice was shortlisted for the Costa Biography Award in 2015.

How did a pioneering photographer, Oxford don and mathematician become a cultural icon by creating some of the most memorable characters and funniest nonsense ever written? This biography was reissued to commemorate the 150th anniversary. It is a bit dated now but well researched.

Artist of Wonderland: the life, political cartoons, and illustrations of Tenniel by Frankie Morris

Best known today as the illustrator of Lewis Carroll's Alice books, John Tenniel was one of the Victorian era's chief political cartoonists.

This book is the first to draw on primary sources in family collections, public archives, and other depositories. There are six chapters on Tenniel's work for Carroll. These reveal links with Christmas pantomimes, Punch and Judy shows, nursery toys, magic lanterns, nineteenth-century grotesques, Gothic revivalism, and social caricatures.

The 1951 Disney cartoon is often an introduction to Alice for children. In this animated Disney version of Lewis Carroll's stories, young Alice (voiced by Kathryn Beaumont) is transported to Wonderland after being distracted by the White Rabbit, who is late for a very important date. There she encounters the grinning Cheshire Cat (Sterling Holloway), joins the Mad Hatter's (Ed Wynn) tea party, and falls foul of the ill-tempered Queen of Hearts (Verna Felton) during a game of croquet.

An unusually subtle fact based drama written by Dennis Potter which centres around the grown-up version of Alice from Lewis Carroll's classic book Alice in Wonderland.

The eponymous character (Coral Browne) makes the long journey from England to New York to receive an honorary degree to celebrate the centenary of Lewis Carroll's birth. Now known as the widowed Mrs Hargreaves, Alice struggles to come to terms with persistent memories of the origins of the story in which she starred and the unwanted fame and attention it is now bringing her. As she prepares to receive her award she is plagued by hallucinations involving the story's famous characters and memories of an old family friend, Mr Dodgson (Ian Holm).