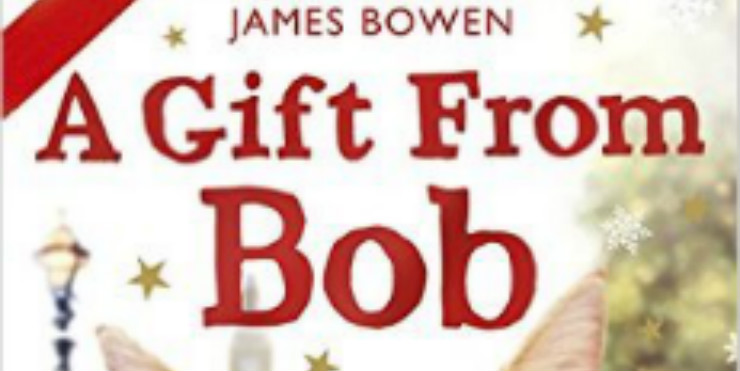 See A Gift From Bob in our catalogue.

With the fabulous film A Street Cat Named Bob now showing locally, I just had to read this seasonal sequel from James Bowen in the lead up to Christmas. The book’s subtitle is: "How a Street Cat Helped One Man Learn the Meaning of Christmas" but I have my own: "Bob is the Gift that Keeps on Giving".

The story starts with James and Bob partying with London’s social elite in 2013, where Bob is undoubtedly the star of the show, the one everyone wants to meet. Having thrown off the traumas of unhappy childhood Christmases and later relying on the generosity of Shelter for a turkey dinner, James reflects on how his life has changed since he found Bob lying injured in a doorway six years before.

This tiny ginger bundle has brought him from drug addiction to fame and fortune. Bob has charmed the London shoppers and James’s profits from busking have increased significantly, to the extent that their first Christmas together is comparatively luxurious – a Santa Paws t-shirt for Bob, and a can of beer for James. Though life is difficult, James believes he is blessed in being able to give a simple card to the strangers who help him on the streets.

By comparison, during Christmas 2008 James is selling The Big Issue, a proper job as he calls it, while Bob has become a YouTube star. Things are looking up; the only downside is a six week separation while James is reunited with his mother in Australia.

Back to 2013 and James, with Bob as always on his shoulder, poses for tourists in Covent Garden. He wears a smile which is not just for the camera but is a genuine sign of his pride and joy in where their journey has brought them. His gifts from Bob are ongoing - happiness and hope – and he does not take them for granted. Away from the parties and talk of film rights, his new life allows him to spend time with others living on the streets, helping them to come to terms with their own problems.

James’s story is sensitive and moving. It evokes both pity for him and Bob at what they have been through, and also joy for this mismatched pair who were destined to become lifelong friends. I urge you all to read this book but give one word of advice – have a box of tissues to hand when you do.